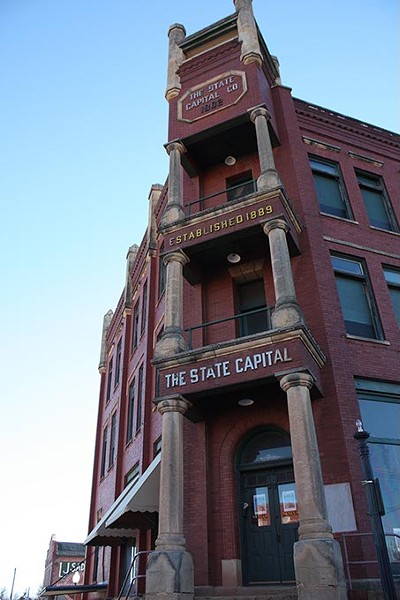 Troubled by the weeds growing and debris beginning to clog the window well, Lentz admired the large collection of printing machinery, including a Linotype, a typecasting machine used in the publishing industry into the 20th century.

He shared local lore about others who used to peer into the basement through these windows. At the turn of the 20th century, employees of The Daily Oklahoman were rumored to spy and glean the next day’s headlines in The State Capital, published by Frank Greer and the State Capital Publishing Company. The tale highlighted the fierce rivalry between the two newspapers, both reporting news from Indian Territory and Oklahoma, after entering the union.

That story was just one of many anecdotes Lentz recalled during Oklahoma Gazette’s recent visit to Guthrie. Lentz served as curator of The State Capital Publishing Museum when the site opened in 1984.

In the state museum, staff and volunteers recollected the newspaper publishing industry of yesteryear and highlighted a unique Guthrie business for visitors.

Now, Lentz is limited to sharing stories from the outside looking into the historic site, located at the intersection of Harrison Avenue and Second Street in Guthrie. After nearly 30 years, the venue welcomed visitors for the last time in 2012. A broken boiler forced the Oklahoma Historical Society to shut its doors and end a partnership with the Logan County Historical Society, which oversaw the facility’s day-to-day operations.

A new boiler was estimated to cost $120,000, a heavy price tag for a state agency experiencing budget drops in recent years. Members of the local historical society were frustrated, as visitors to Guthrie could only peer through windows to view the national landmark.

Last spring, Oklahoma Historical Society and the state Office of Management and Enterprise Services began accepting proposals for the purchase or lease and redevelopment of the building.

Logan County Historical Society viewed the opportunity as a second chance to breathe new life into the museum. The group was one of four entities to submit a proposal, but unlike the others, the county historical society wanted the building turned over to the community of Guthrie.

“The community rallied to purchase this property to preserve it and develop it as a museum because of its importance,” Lentz said. “Now, with state budgetary cutbacks, we are simply asking the property be returned to us. We can continue the work there.”

In 1973, the State Capital Publishing Museum building was entered into the National Register of Historic Places. A year later, the Guthrie Chamber of Commerce purchased the property for $50,000 from Myrtle A. Jackson, who owned the Cooperative Publishing Company in that location.

On Oct. 16, 1975, the deed changed hands again — to Oklahoma Historical Society for $10. The state agency was to operate the museum, which featured a working vintage press and a large collection of printing equipment.

Carol Hirzel remembers the opening-day fanfare, even without looking through the program she saved for decades. As a docent in the 1980s, Hirzel led school groups and out-of-state visitors through the museum. Like Lentz, she supports reverting the building back to the community.

She researched other former state museums, including Kingfisher’s Chisholm Trail Museum, which was donated back to the original donors from Oklahoma Historical Society.

“The state never went back to the donors and asked, ‘Would you operate it?’” said Hirzel, a member of the county historical society board, “the way they treated everyone else; they treated us different. We don’t know why.”

Through the program, the Office of Management and Enterprise Services (OMES) is tasked with liquidating properties that fall within the 5 percent most underutilized state-owned properties. The list is published before the end of the year, and the Guthrie museum was one of 11 properties listed in the 2014 report.

Through a connected law passed in 2013, proceeds from a sale are used for maintenance costs of other state buildings, which can include state Capitol repairs.

According to the report, the list value of the Guthrie museum was $5.6 million, but its estimated value was left blank.

For eight months, OMES collected written proposals for the purchase or lease and redevelopment of the State Capital Publishing building. OMES entered the proposal stage with a goal of preserving the building’s historical significance and stimulating Guthrie’s economic development.

“The State Capital Publishing Company is one of Oklahoma’s most historic buildings and one of Guthrie’s architectural crown jewels,” Melissa Milburn, director of real estate and leasing services at OMES, said in a news release. “When you step into it, it’s like stepping back in time, as much of the building has the original flooring and fixtures. We are hoping this will be a major win for the state, Guthrie, the new occupant and this grand historic building.”

A selection committee will review the four proposals. The committee is comprised of representatives from OMES, University of Oklahoma College of Architecture, Oklahoma Historical Society and the city of Guthrie, said John Estus, OMES public affairs director.

In addition to a proposal received by the county historical society, developers Williamson County Investments Corp. and Bywater Development Group submitted proposals, as did the Lauren R. Ladd Trust of Guthrie.

“They have one or two more meetings,” Estus said of the committee, which meets in private. “They haven’t made a decision yet on which proposal they want to select, if any.”

Proposals are evaluated based on criteria of community benefit, historic preservation and a redeveloper’s qualifications, experience and financial capacity.

Lentz said that only Logan County Historical Society has experience running a museum and a deep connection to the local community. He is counting on the committee to recognize the nonprofit group’s dedication to the historical site and commitment to reopen the museum, telling the story of the first newspaper in Oklahoma.

“It is too important of a building to let it go,” Lentz said. “If it was in the wrong hands, it could be altered from the original purpose and the historical character lost.”