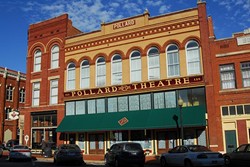 W. Jerome Stevenson has established himself as a fixture in the director’s chair at Guthrie’s Pollard Theatre, but the company’s artistic director takes on a new role this month as a featured performer in Fences.

The play is fresh on the minds of many following the success of the recently released film version featuring Denzel Washington as director and star performer alongside Viola Davis as Rose. While Stevenson portrays Troy in the August Wilson-written play, he passes the directorial baton to Akin Babatunde, a Dallas-based actor, director and writer who has worked in everything from Broadway to regional theater and television.

Stevenson said Wilson has always been one of his favorite playwrights and Fences has been on his to-do production list for a long time. He said it serendipitously worked out where they were ready to do the play right around the time Washington was releasing his film.

For Fences, Stevenson sought a new director’s vision in part because he was interested in trying out for a role himself. He also loved Babatunde’s ideas for the production.

“One of the first things that attracted me to him as a director is he said, ‘You know, this is not an African-American play,’” Stevenson recalled. “‘This is a play whose playwright happens to be African-American, but the story is accessible to everybody.’”

Babatunde first visited The Pollard Theatre to see its 2015 production of The Mountaintop. He said he loved the way he was greeted by theater staff and was especially impressed with Stevenson.

“I was pleased and filled with pride that the artistic director for this theater was an African-American man,” Babatunde said. “I loved the way Jerome conducted himself and the enthusiasm he showed for the work of others.”

Babatunde had to earn a certain degree of trust from Stevenson, and that trust seems to have been granted.

“[Stevenson] is a gem to work with,” Babatunde said. “He takes direction well. Sometimes he will ask questions and I will give him a better idea of what my vision is. Once he’s clear, he’s there.”

When Stevenson auditioned for Fences, he said he was not necessarily expecting to be cast in the main role, but he is thrilled to have the chance to play such a strongly written character.

While the film version of Fences has received mostly praise, Babatunde said it doesn’t compare to the stage version when it’s done well. A close-quarters stage set goes a long way into making a story more personally gripping.

“I think people will become a part of this world and I think they will be moved by this world,” he said.

Stevenson said at first, he promised himself he would not see the new film version of Fences until after the production.

Soon, however, he came to the conclusion that the two are very different pieces of art, so he wanted to check it out. He said those who are fans of the movie will get a very different experience when they see the play at The Pollard.

“I think they will be taken aback by how quickly it moves, by how engaging it is, by how fun it is,” Stevenson said.