It did not seem to matter how many times Lindsey Cox said the name, because For the Recently Deceased seemed destined to take on a life of its own.

The art and music showcase based on the work of iconic director Tim Burton, whose dark wit and imagination has spawned classics like Beetlejuice, Edward Scissorhands and The Nightmare Before Christmas, has quickly spread across the region. On the event’s official Facebook page, more than 1,000 people have said they will attend, while an army of nearly 30,000 more have said they are interested in attending.

Guests are encouraged to come in costume as their favorite Tim Burton character. For the Recently Deceased: A Tim Burton Art Show runs 6 p.m.-1 a.m. Saturday at 51st Street Speakeasy, 1114 NW 51st St. Admission is free through 9 p.m. with a $5 cover after that.

Cox, guitarist and one of two lead vocalists for The So Help Me’s, a self-described existential rock band based in Oklahoma City, said the show was originally set up as a themed Halloween gig for the band. The fact that a Burton tie-in might give the event wild viral appeal never occurred to the group.

In addition to The So Help Me’s, which is scheduled to play at 11 p.m., three other bands are booked for the event, including Colorado’s Tyto Alba at 9 p.m., OKC indie rock group Foxburrows at 10 p.m. and psychedelic folk rockers Helen Kelter Skelter at midnight.

Ryan Drake will be DJing upstairs where the show’s art will also be on display. Cox said the show should include around 25 artists and 60 total pieces. The Speakeasy will likely develop a special Burton-themed menu for the night. A contest to name the best Burton-themed costume might also be held.

Unlike anything else The So Help Me’s have organized in the past, Cox wants this show to be more than a concert.

“I love having that visual aspect, because I don’t want it to just be a show,” she said. “I want people who are interested in art to also get a little bit more out of it.” 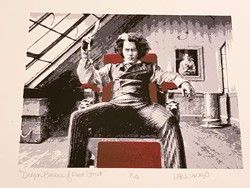 Cox said The So Help Me’s have held a themed Halloween show at the Speakeasy the last two or three years, but nothing nearly to the scale of For the Recently Deceased.

She was on her front porch, brainstorming ideas for this year’s show with guitarist John Wilkerson, when they first thought of giving the show a Burton theme. It seemed like a good enough idea.

“I mean, who doesn’t like Tim Burton?” she said.

After they cleared the idea with the Speakeasy, Cox created a Facebook event page for the show and shared a link with an artist opportunity group on the site. She did not think much of it again until she checked the page later that night and saw hundreds of people already committing to attend.

For many, the idea of a pop culture-themed art show at the Speakeasy is nothing new. Local event production duo James Nghiem and Mike Allen have worked with the venue for the last few years to throw art shows themed after directors Wes Anderson and Quentin Tarantino, guerilla street artist Banksy and the video game Street Fighter, among other things. Nghiem and Allen hosted a Buffy the Vampire Slayer art show at the venue on Oct. 21.

While they are not involved in a hands-on way, For the Recently Deceased has the duo’s enthusiastic support. Allen designed the show’s promotional poster, and Cox said Nghiem has been a helpful guide as she has worked to organize a show like this for the first time.

Cox is comfortable managing the workload associated with the show so far, though its wild popularity is both a blessing and a curse. The Speakeasy has an attendance capacity of around 500.

“If it gets out of my hands and too many people show up, there’s really nothing I can do about that,” she said. “That’s the only part that’s out of control, just the amount of people interested.”

Cox said she can pinpoint the beginning of her fascination with Burton’s films. It was while she was watching Beetlejuice for the first time, during the iconic scene at the dinner table in which everyone is possessed to break into a rendition of Harry Belafonte’s “Day-O,” otherwise known as “The Banana Boat Song.”

If the band has the time to learn the song, The So Help Me’s is planning to perform it during its set in front of what will likely be an abundantly receptive crowd of Burton fans.

Burton won a 2008 Golden Globe Award for best musical or comedy with the Johnny Depp-starring film adaptation of Sweeney Todd: The Demon Barber of Fleet Street. He most recently helmed the 2016 teen fiction adaptation Miss Peregrine’s Home for Peculiar Children. Burton is directing a live-action remake of Disney’s Dumbo, slated to premiere in 2019, and announcements for his involvement in a planned sequel to Beetlejuice have been made.

As for The So Help Me’s — a sextet that also includes Sophia Massad on vocals, keys and guitar; Lucas Gillette on bass; Harvey Crowder on synths and Ethan Neel on drums — other themed shows might be in the group’s future. Cox hinted at the possibility of a Harry Potter-themed gig.

Tying shows to a particular theme keeps things fresh for both the band and the audience.

“We’re trying not to be kitschy and only do themed shows,” Cox said, “but I generally like to have some sort of theme going along with each show.”

Fans might have to wait a while until any future So Help Me’s themed show occurs. Cox said the band will likely take a break from local shows beginning next month to focus on recording a new project — perhaps its full-length debut. Its Relativity EP was released in 2016.

Show attendees who are not interested in hearing any of the music are encouraged to show up early while it is still free. If everyone shows up after 9 p.m., the show could turn into a logistical nightmare and ensure frustrations. That is something Cox wants to avoid at all costs.

For the Recently Deceased: A Tim Burton Art Show