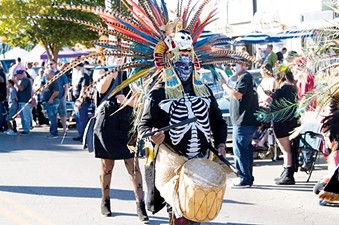 Pixar’s release of the 2017 blockbuster animated film Coco about a small boy searching the land of the dead to make contact with his mariachi father, will inform the way many Oklahomans view the upcoming Day of the Dead celebrations and enhance the appreciation of how the holiday encourages remembrance of loved ones who have passed on.

For Theresa Beck, Coco was an almost too familiar portrayal of her childhood as the daughter of the famous mariachi singer David Záizar.

“The scene where the father is singing to the little girl was kind of hard for me to watch because that’s what I remember, him coming back from overseas with his entourage but still trying to create these quiet moments where he could just sing to me,” Beck said.

Záizar was the rey del falsete, the “king of the falsetto.” He was remembered with a bronze sculpture in Jalisco, Mexico, and his standards are still played by mariachi bands around the world. Beck, who performs jazz with Amante, has avoided singing mariachi music in public all her life, fearing she couldn’t live up to her father’s legacy.

That will change 2 p.m. Sunday during 16th Street Plaza District’s fifth annual Day of the Dead Festival when Beck will sing her father’s songs with Mariachi Orgullo de América.

“I never get nervous when I perform, but when Shelly States (Folk.Life owner) asked me to do this, it was different,” Beck said. “Singing mariachi has always been on my bucket list and this will be my opportunity to pay respects to him. I am just hoping to get through the set without crying.”

Stephanie Sunday, former owner of Dig It!, started the Plaza District festival almost unilaterally. She pulled in help from Maximus Detritus (Bomb Shelter) and Amanda Martinez, both of whom have deep family ties to the holiday.

“I remember going to the graves, bringing the wine, the candies, the food, but I mainly remember the candles,” said Detritus, who was born in Brazil. “It wasn’t quite as colorful and big (in Brazil) as it is in Mexico and other parts of Central America, but I’m lucky that I have Mexican family members, so I do have some background in that. ”

Martinez is the new owner of Dig It! and has long explored the themes and visuals of Día de los Muertos.

“Because I was Catholic, I had a connection with the Day of the Dead holiday,” Martinez said. “But I was also a quirky artist, and this was a way for me to ingrain my faith into my artwork that was also colorful, fun and involved glitter. It was an art that was more representative of me. I would set up at the Catholic women’s conference and the ladies from the Catholic bookstores where I’d buy the little Marys would be shocked.”

Erika Reyes, former owner of Everything Goes Dance Studio, is now the dance director and the site coordinator of Capitol Hill High School Academy of Fine Arts and said that her students will be collaborating with Everything Goes for performances to represent the different states of Mexico.

Singing mariachi has always been on my bucket list, and this will be my opportunity to pay respects to [my father]."—Theresa Beck tweet this

“Towards the end of the festival, dancers will perform a dance entitled ‘La Bruja’ with lit candles that the dancers balance on their heads while dancing,” Reyes wrote in an email. “This dance beautifully represents the essence that is Día de los Muertos. It sets the mood as the festival ends that we take the time to reflect on our loved ones who have passed; the way they spoke to us, the stories they used to tell us, what they enjoyed doing and how much we miss them and continue their legacies every day.”

As part of the extended celebration of the Day of the Dead, Martinez will be teaching classes on ofrendas. Prominently featured in Coco, ofrendas are remembrances of loved ones that are essential to the holiday. Those interested in the classes are encouraged to email digitokc@yahoo.com, visit the store or call 405-473-4649.

Oklahoma Latino Cultural Center is also partnering with Oklahoma Contemporary Arts Center for a trio of exhibitions including a curated group show of Latinx artists from across the region called Day of the Dead/Día de Los Muertos, a photographic exploration of the wide range of people who identify as Latinx titled Chris Ortiz: Portraits of Latinx Identity/Retratos de la identidad latina and prints by Self-Help Graphics, a Los Angeles-based community art center. Narciso Argüelles founded OLCC with Wilmari Ruiz and Ricardo Sasaki Cajias as a way to bring attention to the city’s growing Latino art community.

“You can see it in public art, festivals and exhibits along SW 29th Street with groups like La 29 spearheading the charge,” Argüelles wrote in an email, adding that OKLCC and La 29 are partnering on a large public art piece. “Another Latino art scene can be found in the historic Capitol Hill at Calle Dos Cinco on SW 25th Street. Calle Dos Cinco is another group who is developing the area and using art to do it.”

Though the Latino cultural footprint in the city is growing, organizers have found that it can be difficult to get buy-in from parts of that community because of fears of the political climate and the looming specter of Immigration and Customs Enforcement (ICE). Parades, rallies and marches are classified as “sensitive locations” not to be targeted according to ICE’s official website unless there are “exigent circumstances” or if officers are given prior approval by supervisors. Argüelles has heard from other organizers that were contacted by ICE ahead of sweeps to potentially detain immigrants.

Detritus said he noticed that support from some of Plaza District’s neighbors has been stifled in the past by fear of racial profiling, but he thinks that might be changing.

“Back in the day, if you had a Day of the Dead festival, it was tough to get the Hispanic community involved because they were afraid,” Detritus said. “They were afraid of immigration people showing up or the police. But last year, I didn’t see people shying away, and I think in a way, it’s almost like people were emboldened. They want to get involved because it’s a party about them and they want to feel comfortable.”

Day of the Dead Festival