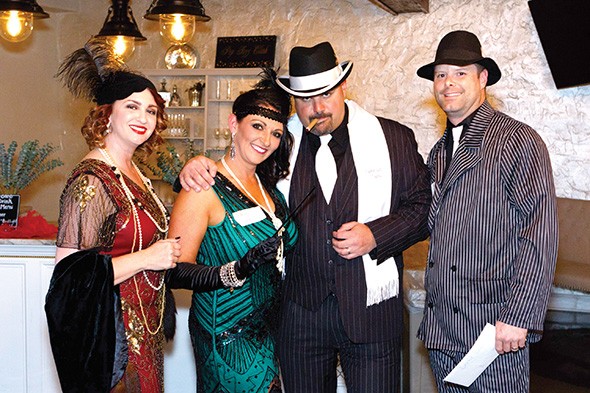 Murder at the Juke Joint

Arts patrons and partiers will have the chance to help diversify Oklahoma’s film scene by participating in a murder investigation.

Unlike a traditional dinner theater murder mystery, Murder at the Juke Joint features a cast of characters made up of ticket buyers. The minimal script for the game is adapted from Murder at the Juice Joint by the party game provider Night of Mystery.

“With the passing of prohibition and organized crime on the rise,” reads Night of Mystery’s description, “a swanky speakeasy run by Rosie Marie has been nothing but jumping. To celebrate its success, Rosie is planning a party to remember at the exclusive nightspot... and you are invited! However, one of the names on the guest list is also on another’s hit list and no one is safe from the consequences. … From major mobsters and their molls to the swanky singer with her hopes at Hollywood. The cigarette girl with a temper that sizzles to the crooked police chief with nothing to lose — no one is safe from murder ... but everyone will have a chance at solving it.”

Lazara Gonzalez — who is helping Anthony Crawford Jr. organize Oklahoma Black Film Festival — is adapting the script. She explained how the party guests will know how to get into character.

“Your little piece of paper, which is your script, is literally one page, one to two paragraphs,” Gonzalez said. “Two paragraphs is only the murderer pretty much, and as the murderer, your paper tells you what to do and not to do. You don’t even know you’re the murderer until the second part because there’s two pieces of paper that you get, each a paragraph at a time. You’re given a back history. Maybe you and [another player] fought for the same girl two years ago and he swore to get back at you, then you find out you are the one that’s murdered.”

Other characters might receive instructions to retrieve specific props from the bartender or to gather information by interviewing other characters or secretly monitoring their behavior. And like any good private detective in a film noir, players will have the chance to grease the gears with a little old-fashioned bribery.

“When you come to the event, you get fake money and you have to buy information, so the whole murder mystery is based on two things: if you can solve the murder and who’s raised the most money if you have intel or you make people feel like you have intel,” Gonzalez said.

Though the unscripted results can be chaotic, Gonzalez, who oversaw a similar fundraising event for Purcell’s Grand Canadian Theater in 2018, said the chaos and the unpredictable responses to it were part of the fun.

“I don’t care how shy somebody is; everybody will end up getting involved.”
—Lazara Gonzalez tweet this

“The disaster is what makes the night because some characters found themselves at a deadlock,” Gonzalez said. “One found themselves without money, so she actually resorted to committing a crime and stole money. I watched her. Somebody put their pile of fake money down, and she was helping her husband, with his little bow tie, and the woman just went and grabbed half of that money from the person and kept on walking.”

Upon discovering the crime, the victim, who earned her sizable stack of money through skillfully brokering information, created a little chaos of her own with a prop gun she’d gotten from the bartender.

“The woman who got robbed, she happened to be very good at what she was doing,” Gonzalez said. “So she was mad. She was like, ‘Give back my money! That is not fair!’ and I’m like, ‘You’ve got to stay in character,’ so she goes, ‘Oh yeah?’ and she took out her little pistol … and was like, ‘I’m not playing up in here!’ and her husband had to talk her down. We had a blast.”

The friendly competition and room for improvisation encourages participants to get into character.

“People make it fun when they come to the event and they’re open-minded,” Gonzalez said. “I don’t care how shy somebody is; everybody will end up getting involved. … People were flirting with each other’s husbands to get information.”

A failed poisoning attempt eventually led to an unintended outcome, Gonzalez said, and one woman accidentally disclosed to a whole group that she was the murderer. Fortunately for the game’s mystery, the would-be confessor was wrong.

“Come open-minded, ready to let go and have fun, to really experience the moment,” Gonzalez said.

“Getting people to invest in our culture is hard,” Gonzalez said. “I’m finding it very difficult even to get sponsors at the moment. … Our culture is a lot different, and there’s a lot of different challenges that we’re facing.”

Tickets for Murder at the Juke Joint are $15-$45. To register for the event or to learn about sponsorship opportunities for Oklahoma Black Film Festival, call 405-458-4548 or visit okblackfilmfestival.org.