Gwar’s Use Your Collusion tour brings cosmic horror and gallons of fake bodily fluids to OKC.

“How can you cancel something that can't die?” asked Jizmak Da Gusha (aka Brad Roberts), Gwar’s dog-headed, war hammer-wielding drummer.

Considering the self-described “Scumdogs of the Universe” have survived many existential threats —real (obscenity charges, the 2014 death of frontman and mastermind Dave “Oderus Urungus” Brockie) and, uh, fanciful (vengeful genetically modified penguins, the theft of Urungus’ animatronic penis by the Morality Squad) — since Gwar first formed in 1984, this offhanded dismissal of social media scolds seems like the most genuine moment of our in-character interview with Jizmak.

With new frontman Blothar the Berserker (Michael Bishop, who originally played in the band as bassist Beefcake the Mighty) Gwar’s Use Your Collusion tour lands 7:30 p.m. Oct. 30 at Diamond Ballroom, 8001 S. Eastern Ave. Claiming to be obscene, crack-smoking Lovecraftian horrors banished from their homeworlds, the polystyrene-clad rock band takes metal’s obsessions with sex, death and violence to a cartoonish extreme, dismembering politicians and celebrities in effigy onstage and leaving the audience soaked in fake blood and other bodily fluids. Released in 2017, The Blood of Gods takes on Trump in “El Presidente,” curses earth in “Fuck This Place” and eulogizes Brockie in “Phantom Limb,” which says, “The road is long and the road is hard / On a monster in a band / But the toll it took was so much more / Than we had ever planned / The world has never looked so dark / The pain has never felt so bad / Is it wrong to try to go on / When it's all we ever had?”

In our phone conversation with Jizmak, we discussed the tour, the band’s evolution and why you should take livestock to the show. (Note: Probably don’t do that.)

Oklahoma Gazette: Who or what is Gwar colluding with?

Jizmak: We're being tried for crimes against humanity, and I guess if you really need the answer to that you're going to have to come to come see a Gwar show on our Use Your Collusion tour this fall all over America. We're not really sure who's after us, but it's all revealed at the show. If there's an excuse for us to get off this miserable planet, we will certainly take our punishment, if we’re banished from earth or whatever. Basically, Gwar has been plaguing and ravaging the earth, trying to rid you humans of it for years and years and years — almost 30 million years at this point, and it seems like we're getting closer every day.

OKG: In your time behind the kit, what do you think you've seen in Gwar that you wouldn't have seen as a drummer for a different band? 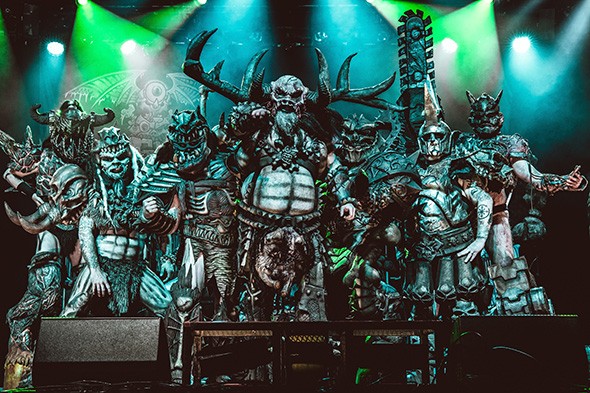 OKG: Has the political climate in modern America changed your approach at all?

Jizmak: The political climate of human beings and your plight are the least of Gwar’s concern. Gwar’s concern is crack, rocking out and trying to get off this miserable place, which you humans seem hell-bent on trying to destroy. You’re just a parasite. You're a plague on the planet. You all must be wiped out. I think our approach now is being minimized by the fact that human beings have sort of taken as even sicker and more vile and destructive, even more so than Gwar, which is really hard to do, but apparently, with social media, you humans can hate one another from far away, which is something that Gwar has never been able to do. So basically, we're trying to reclaim our throne from you.

OKG: Is there ever a temptation to just sit back and let us destroy ourselves?

Jizmak: We're just too interactive. We don’t shoot from far away like a gun or a pistol. We like to get up close and jam a sword in you. We want to make it personal.

OKG: In the two years since your last album, have the songs changed or evolved as you've played them live?

Jizmak: Of course. When you do something multiple times long enough, it gets better, you refine it, you get more comfortable with it, but the initial music created spontaneously at that moment is the greatest. So it’s not better because you play it more. It’s already great from its inception with Gwar. It just gets easier. It’s like killing. After your first kill, it just gets easier and easier to kill.

OKG: Have you settled into a rhythm with Blothar at this point?

Jizmak: He’s an old scumdog. I mean, there’s nothing to settle into. Scumdogs are all family. We're all from the same place, outer space. You guys are the ones we have to settle into. You’re the thing we don't understand. That’s why we’re trying to kill you. If we can’t fuck it, we fight it. Most of the time, we do both with the humans.

OKG: You've been to Oklahoma a few times in the past year.

OKG: Is there a special strategy for destroying people from Oklahoma?

Jizmak:  I don’t think there’s a special strategy at all. I don't think so. I don't like that question anyway. Oklahoma could probably destroy itself. It's got enough tornadoes and cows to run amok, so I don't know. I don't understand that. Next question.

OKG: Is there anything you want to add?

Jizmak: That’s a good question. … I want the people of Oklahoma to bring all their cattle to the Diamond Ballroom to see the Gwar show. We’re a little bit hungry, and we’re tired of eating goats, so we need some good prime beef. Bring them to the show, and you get in free. But definitely come out and see Gwar. It’s going to be a real, real fun time, a very big surprise. We’ll see what happens to the fate of Gwar on the Use Your Collusion Tour. Who knows? Maybe this is it.

If you don’t have a cow, tickets are $22. Sacred Reich, Toxic Holocaust and Against the Grain share the bill. Call 405-677-9169 or visit diamondballroom.com.