Oklahoma City native Hui Cha Poos developed a love of dance as a child, watching productions like A Chorus Line and Peter Pan.

After a successful dance career in Los Angeles that saw Poos earn screen time in multiple movies, music videos and a variety of star-studded performances, she moved back to Oklahoma to become a dance teacher at the University of Central Oklahoma in 2002.

“I realized we were graduating a lot of dancers who were incredible, but we found that if they didn’t seek employment in New York, Los Angeles or elsewhere, they’d stick around here and didn’t continue to dance because there wasn’t much more than the ballet or modern dance company at that time,” Poos said in a phone interview with Oklahoma Gazette.

Poos founded RACE Dance Company, which stands for Radical Application of Creative Energy, in 2011 to provide a new professional company for the city’s dancers and also broach the topic of social awareness through dance.

“It makes sense to do something more with dance than to just be an entertainment source,” Poos said. “One of the greatest ways to communicate and reach certain parts of the public that wouldn’t normally be open [to social issues] is through dance and movement. … We want to give a different perspective and reach audiences in a ways that are both entertaining and thought-provoking.”

RACE puts on a variety of shows throughout the year, each with their own theme and target audience. Friday’s show, Murder on the Dance Floor, is aimed at adults while Dec. 8’s Hip Hop Nutcracker is more family-friendly.

“We thought Halloween would be a good time because people are more open to being scared and a little more free,” Poos said. “It’s not a real murder, just killing the dance floor, having fun on the floor without worrying about anything else.”

The October event at The Paramount Room, 701 W. Sheridan Ave., will include two performances, one at 8 p.m. and another at 10 p.m. Guests must be 18 years old to enter and 21 to drink. Tickets are $20, which includes access to a cash bar. For those attending the 10 p.m. performance, a Halloween costume contest will be held for tickets to Hip Hop Nutcracker. A dance party will go until midnight after the 10 p.m. performance.

The eclectic, high energy shows feature 15 new dance numbers, with one holdover from last year’s Halloween show, a dance performed to Lady Gaga’s “Teeth.” The group had less than a month to put together the show, which will range from jazz and hip-hop to contemporary and burlesque.

“In a really short amount of time, we’ve managed to get together a really great show,” Poos said. “Most of our dancers are professionals, and we’ve had two rehearsals a week, so you’re learning a new number each rehearsal. We’re moving really fast, and that’s an impressive aspect of this company.”

Like every RACE show, Poos finds ways to work in social awareness on topics such as gender, race and equality issues, and the Murder on the Dance Floor show is no different. 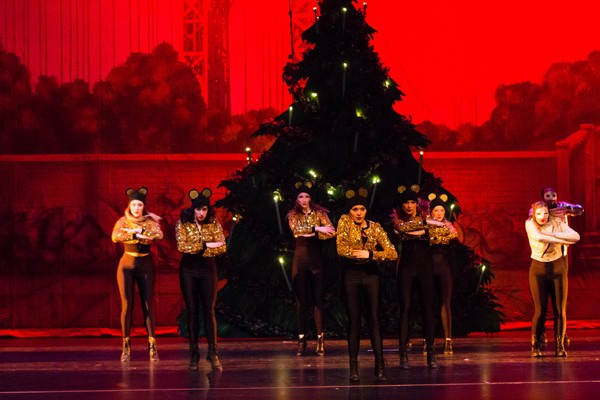 Poos said the show is a reaction against the social norms of modesty that tell a woman they aren’t allowed to be both strong and sexual.

“The social climate makes women feel like they can’t be those things,” Poos said. “Even while performing numbers based on murder, we’re changing social awareness. The audience is seeing women that are strong and sensual and don’t apologize for it. It’s an impact that isn’t meant to be in-your-face.”

The December performance of Hip Hop Nutcracker takes a traditional ballet set in the background of a perfect nuclear family and wealth and grounds it in reality. RACE works with 70-80 children enrolled in Oklahoma City Public Schools and tailored Hip Hop Nutcracker to be told through the perspective of one of the performers.

“There is an awareness of being in a single mom household and having to look at things he’s able to treasure rather than the things he doesn’t have,” Poos said. “There’s a full circle story told through his eyes.”

Murder on the Dance Floor