Geronimo’s Bakery thrives as an eastside hotspot for great burgers and sweet treats. 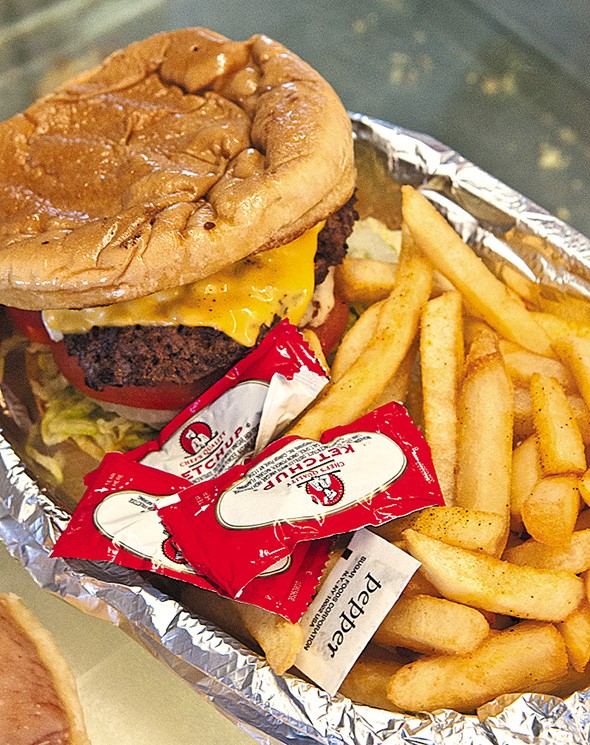 There are only a handful of restaurants in the Oklahoma City metro area still open and popular that have celebrated their 50-year golden anniversary.

Opened in 1972, Geronimo’s Bakery, 1817 N. Martin Luther King Ave., is rounding the corner to joining the 50 club headlined by the likes of Florence’s Restaurant and Cattlemen’s Steakhouse.

Raymond Richards founded the bakery, wrapped it in orange and black in support of nearby Frederick Douglass Mid-High School and named it in honor of one of his sons, Geronimo. Raymond’s other son Jeffrey took over the bakery in the early 1990s and credits the bakery’s success to keeping it in the family.

“When something matters to you, you treat it better,” Richards said. “We come to work every day knowing that’s how we keep the door open, and we put out a good product. If you put out a bad product, people will go the other way. There are so many options out there now. I can’t afford to put out a bad product.”

In addition to providing sweet treats like doughnuts, Geronimo’s is perhaps best known for its hamburgers.

“When it opened, it was more of a full-fledged bakery with cookies and cakes than it is today. We still do all of that, but you have to order it [in advance],” Richards said. “About three years in, my mom came up with the idea to add sandwiches. Over time, the sandwiches have overtaken the bakery part.”

Geronimo’s comes up in the conversation for best hamburgers in Oklahoma City, and Richards said he takes pride that when he Googles the term, the bakery pops up among the search results. Its eponymous burger tops grilled ham on the quarter-pound beef patty.

Over time, the sandwiches have overtaken the bakery part.Jeffrey Richards tweet this

“Geronimo Burger was something my brother [Geronimo] came up with,” Richards said. “His girlfriend was pregnant, and she was craving it. She ordered ham on the burger, and he called it the Geronimo. It wasn’t on the menu [at first], but now it’s the best seller.”

He said the key to the perfect burger is not to overload it with beef. If customers want a half-pound, they can order a double.

“We don’t go with a big, fat, thick meat patty,” Richards said. “I don’t think it has any taste. We toast our buns, and everything is freshly made, and it’s just the right amount of meat; I promise you.” 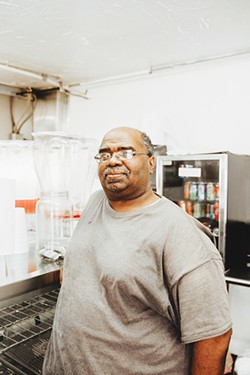 Geronimo’s also offers fried catfish, chicken wings and strips and hot link sandwiches in addition to its assortments of baked goods, which are made fresh every day. An employee starts the baking process well before dawn to have them ready for 8 a.m. opening, and a large majority of the baked goods are already sold out by the noon lunch rush.

If there are doughnuts available, Richards and staff will acquiesce those in search of a Luther Burger, an off-the-menu item in honor of famed singer Luther Vandross, who liked the combination of a cheeseburger with doughnuts for buns.

“In the evening time, you probably can’t get it because the doughnuts are gone,” Richards said. “We’ve done it for about five years. It doesn’t really work for me. I don’t like mixing my sweets and my meats. A lot of people like it. I’ve got guys who come in and want egg and bacon on it.”

Geronimo’s also offers what is in contention for the largest doughnut in the city, The Big Texas, which he said is equal to about six regular glazed doughnuts. It sells for $2.75, and they make about a dozen per day unless there is a special order.

“My dad named it that because everything is bigger in Texas, supposedly,” Richards said. “From when my dad was doing them, I’ve actually cut down on the size.”

Frederick Douglass Mid-High School is located a few blocks south of Geronimo’s Bakery on Martin Luther King Avenue, and the bakery’s walls are lined with schedules of the school’s athletic teams. Although Richards is a graduate of Del City, he always makes sure people are aware of big events and games at Douglass. 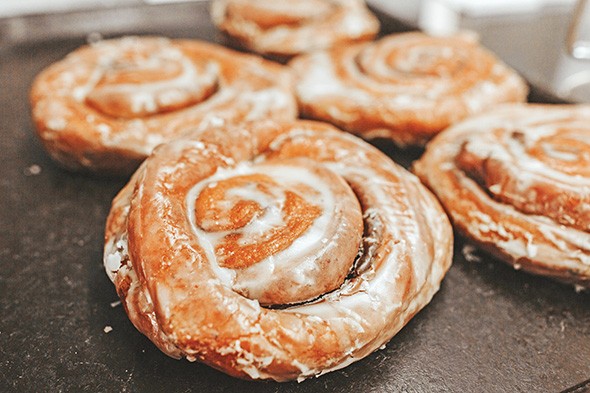 “[Richards will] always put our big games [on the wall] and let people know what’s going on,” said Douglass principal Thomas McNeely. “It’s a hub. A lot of people will go in there and sit and talk about what’s going on at the school and things of that nature.”

McNeely grew up near Geronimo’s at 15th Street and Kelly Avenue and has fond memories of his mother taking him to get doughnuts in the morning.

“They have the best doughnuts on the eastside,” McNeely said. “It was the best food ever as a kid, but that’s the amazing thing. When I go there now, it is the same as what I remember growing up. [Richards] has customers that have been coming in for decades. He keeps it the same, simple, and people love it.”

Richards takes the “If it ain’t broke, don’t fix it” motto to heart.

“I’ve got some younger ones coming up along, and they’re interested in change, and I tell them that when their time comes and they want to make some changes, that’s fine,” he said.

Richards has watched as many of the surrounding businesses have come and gone over the years but is excited for the future of the neighborhood.

“It’s changing for the better,” he said. “I can remember a time when it was on the downturn, but that was many years ago. Now it’s on the uptick. You’re seeing more and diverse people moving into the neighborhood.”