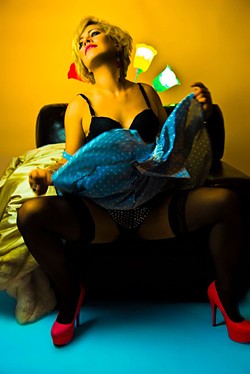 Wolff recently spoke with Oklahoma Gazette about her new music, nostalgia and dancing through life’s curveballs.

“I’ve really been able to drop my ego with this album and find new reasons to make music,” Wolff said. “Now I want live audiences to basically do the same and just interact with each other and the music above anything else.”

“This EP reflects a new skin and shows my roots,” Wolff said. “After I left a marriage several years ago, I had no idea who I was and didn’t feel the same way about my music anymore. I had to figure out why I wanted to keep [creating music], and the different genres in the EP show three years of finding myself again.”

“I started a new chapter in my life and wanted my music to reflect that,” Wolff said. “That shows on this record. I’m getting back to the basics with my influences.”

“The songs are ordered chronologically to when they were written,” Wolff said. “So the EP starts darker and moves to a lighter, more upbeat place.”

“My goal for my music is to create meaningful experiences for audiences that place them in the present,” she said.

Wolff started her music career as a singer and guitarist.

“I started singing at age 7, then picked up the guitar at 15, so I’ve been supporting myself with my own music for most of my life,” Wolff said.

She also has a habit of taking leadership roles in her projects.

And she has certainly learned from the best. Seasoned in her interactions with a variety of audiences, Wolff has opened for major acts like The Donnas and Shiny Toy Guns.

“I’ve been in several different bands for the past 10 years, and for each project, I’ve always fronted the band,” Wolff said.

She is also scheduled to perform Oct. 4 at Red Brick Bar, 311 E. Main St., in Norman with The Monolithic and opens for The Struts during an Oct. 5 tour stop at Diamond Ballroom, 8001 S. Eastern Ave.