Pitch HER Perfect’s Rhythm and Flow brings music and poetry to The Paramount Room. 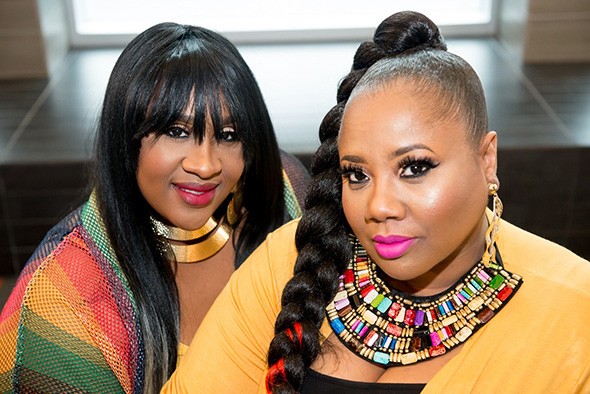 Annisia Anderson and Vada Patrice met singing backup for other artists, but as the duo Pitch HER Perfect, they’ve taken center stage.

“We’ve been in music all of our lives, starting out in church, of course,” Patrice said. “I’ve been behind the scenes for a long time. I’m a songwriter as well, so I’ve written songs for different local artists and did the background for some of the artists that I was writing songs for, and it just kind of went from there. Annisia kind of has a similar background, and we have a lot of mutual friends. The musical network in Oklahoma City isn’t that big, so we would just run into each other all the time, and we ended up singing background for some of the same people. And we just had a bond. … With our chemistry as people, we became good friends and we became sisters, and it just really grew from there.”

Anderson and Patrice began singing as a duo seven years ago after Patrice performed at an open-mic night at Tree Lounge, 203 NE 36th St. When she was offered a gig at the mic, she knew who she wanted onstage with her.

“The first person that came to my mind was Annisia, and so I hit her up,” Patrice said. “She was already kind of doing her own thing anyway as an individual artist. And we just tried it out, you know, just kind of for fun, and it just developed into something naturally. That’s what birthed Pitch HER Perfect; we started out, really, at an open mic, and a lot of the venues would come and scout us out and hear us, and they all wanted to book us.”

They knew they had something special.

“We decided to go ahead with the sister bond we had and form a group,” Anderson said, “and we’ve been singing for seven years, ever since then.”

Together, they decided to step into the spotlight.

“We both actually got the same vision at the same time, to come forward as the lead singer, and we had a conversation about it one night,” Patrice said.

An alternating “group of guys” forms their backing band. The duo plans to release an EP later this year. Though Anderson and Patrice are both songwriters, they often perform new arrangements of other people’s songs onstage, so writing material for an original album has been a challenge.

“Because we were doing mainly cover songs, it’s taken some time to find our sound, that would be signature for Pitch HER Perfect,” Patrice said. “That’s really what we’ve been focused on. That’s why we’ve both dedicated our time to really just Pitch HER Perfect right now instead of working with some of the other artists because sometimes it will get confusing if you’re working on so many different projects at once.”

Harmonizing, however, still feels as natural as it always has.

“We have such a bond, and usually we think alike and we are always on the same frequency,” Patrice said. “Both of us can sing soprano, alto or tenor. If I had to describe our vocals, I would say I have more of a melodic, airy, softer tone and Annisia has a very strong—”

Patrice paused at this point in the phone interview to confer with Anderson.

“Would you say raspy? Not really raspy. She has a very, strong, soulful tone, and it just works. … We know what song will be better for the other person,” she said.

Anderson added, “Also, we work on our blending when we’re singing together, so it’s not one more or the other. We’re kind of just on the same wavelength so one doesn’t out-power the other.”

Tuning to this wavelength, Patrice said, goes beyond harmonizing.

“It’s one thing to find the harmony, but it’s another thing to also find a blend,” Patrice said. “And that’s something that we pride ourselves on is finding not only good harmony notes, but a blend where it just meshes very well together.”

Pitch HER Perfect’s sound also blends a variety of genres.

“We both come from the background of old-school R&B music and the hip-hop generation,” Patrice said. “All of that is kind of fused together with rhythm and blues. And then our backgrounds are deep in gospel music … so it’s kind of like a fusion of all of those things together because some of our tunes might be melodic and then some of them you might hear the bass going.”

In addition to a signature sound, Patrice and Anderson want their music to have a purpose that sets it apart.

"We have such a bond, and usually
we think alike and we are always
on the same frequency."
—Vada Patrice tweet this

“We strive to create feel-good music with a positive message because it’s just kind of crazy out here in the world right now, and they don’t need another artist just to talk about money, clothes, cars,” Patrice said. “They need another artist out here just talking about what’s going on, what’s real — and love, too. We always end up singing songs about love for some reason. But we both have big hearts, and we both want to create a positive atmosphere so people would come and listen to music and just relax and let go because we believe music is therapy. A lot of people feel better after listening to music. It can heal certain mental problems. We just want to do our part and live our dreams because I think music has always been a part of our lives. ... We’ve always had music in our lives, so it’s kind of awesome to do something bigger and really start writing music that will just change things.”