“When I write melodies, it’s very simple, something you could pluck out at the piano with one finger,” he said. 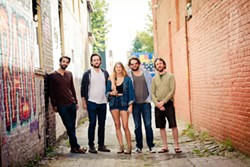 While glancing over the credits for Harumph’s debut studio album, Oklahoma music fans are sure to spot more than a few familiar names.

Threes, the Norman folk-jazz fusion six-piece’s album being released Friday, was recorded by Travis Linville and Wes Sharon of 115 Recording and produced by John Fullbright.

Harumph founder and songwriter David Leach has performed and recorded with Linville, Fullbright, John Calvin Abney, Samantha Crain and many more. Though he primarily plays keys for Harumph, he grew a reputation as one of Norman’s go-to studio bassists.

The band is Leach’s first chance to show off his own songwriting chops. He doesn’t disappoint.

Harumph, a group of players that were friends before they were bandmates, has a distinct sound in the state and pretty much anywhere else it travels. Its album release shows are 10 p.m. Friday at The Deli, 309 White St., in Norman and 8 p.m. Saturday at The Blue Door, 2805 N. McKinley Ave.

Still, the cavalcade of artists Leach has supported through the years clearly influenced him, and not just musically.

Leach arrived at one of Harumph’s first rehearsals after a 2014 tour with Fullbright excited and eager to show everyone what he learned on the road. The bassist pulled out dice and taught everyone the game Threes, from which arose the title of the band’s latest studio project.

The game is played with five dice. Players roll aiming to get the lowest combined score. Threes are worth zero; everything else is face value. Players keep one or two dice each roll and re-roll the remainders until they have five total. Ties are broken with another roll-off between the lowest scorers.

“We still play it all the time,” said Harumph vocalist and guitarist Kate Dinsmore said. “We always have dice on us.”

There are multiple variations of the Harumph lineup, but at full capacity, the band includes percussionist Kiel Dehnert, trumpeter Marcus Spitz, saxophonist Trevor Galvin and bassist Aaron Daniels with Leach and Dinsmore, who, as a pair, are the band’s nucleus.

Leach and Dinsmore got acquainted through the University of Oklahoma’s jazz band. They first met during a jazz jam night Leach performed in at a Norman restaurant. Dinsmore was the only person in the audience.

Leach was studying information technology, but halfway through his degree program, he knew he’d end up pursuing music anyway. He still graduated with his degree, but much of his time was spent writing songs.

Meeting Dinsmore, who was inspired by the work of Amy Winehouse, gave him a chance to pair a voice with his words.

“I’m not much of a singer, but I found a singer,” Leach said. “We kind of found each other.”

Harumph was founded in January 2015. The band quickly released a five-track EP, primarily for promotional purposes. Threes is the group’s first proper studio work. Leach wrote nearly all the lyrics on Threes, and Dinsmore’s powerful, soulful vocals bring the project to life. The pair often work together to interpret Leach’s written melodies into something that sounds good vocally.

“When I write melodies, it’s very simple, something you could pluck out at the piano with one finger,” he said. “That’s where she’ll start, and then she’ll do a run or change an inflection and I’m like, ‘Oh, that’s a lot better than what I was doing.’”

The band’s unique jazz and folk mesh was more of a fortuitous coincidence than the product of a grand master plan. It just so happened that Leach and Dinsmore’s closest friends were collectively everything they needed for a jazz band.

“We kind of lucked out,” Leach said. “In our best friend group, it turns out we all played different instruments.”

Harumph is a fun band and a fun listen, so it makes sense that its first album is named after a game.

“Harumph is a silly name, so you can’t be like, ‘Our band name is Harumph and our album title is Search for the Truth,’” Leach said.

The band often plays casually over drinks and conversation. There isn’t much strategy involved, and newcomers always seem to end up out-rolling everyone else. They bet quarters, but never any more than that.

A generally laid-back attitude allows Harumph to excel in many different settings. The band is equally at home playing background music at a brunch spot, rocking a show at Saints in the 16th Street Plaza District or playing in front of a young, indie crowd in the Pacific Northwest.

While Harumph might be a silly name and its members might like to play games, they are seriously good as a unit. They also serve as a worthy bridge between musical genres.

“We’re really proud of how the sound came together,” Dinsmore said. “I feel like it brings an accessibility to jazz, especially to people in Oklahoma who hear the word and are like, ‘Well, I don’t really like jazz.’ It’s more than that, and it’s brought to them in a simplified sort of way.”

Visit harumphmusic.com to order the album.

Print headline: Threes company, Harumph’s dice game-inspired debut will be the folk-jazz soundtrack for many good times to come.