Jayson “Giddy Up” Emo traveled to Amsterdam for his first Cannabis Cup in 2013, where he and his colleagues swept one of the categories. 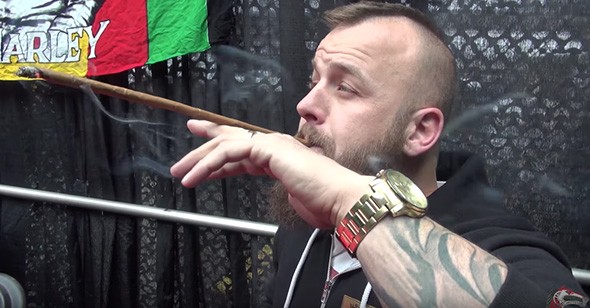 There is beginner’s luck, but for Jayson “Giddy Up” Emo and his friends, there is also just being the best at what you do.

After perfecting his extraction machine with his company, EmoTek Labs, he decided to test out his finished product against some very steep competition in the cannabis industry.

“In November of 2013, I went to my very first High Times Cannabis Cup in Amsterdam. I had a little bit of money then. I’d sold a bunch of those machines. I was like, ‘I’m fucking going to Europe,’” Emo said. “Decided to do an entry with a couple of homies of mine, TC Labs and TerpX. They were both brands, and they were friends and they actually both ended up becoming customers of my equipment, and one of them brought weed from California; one of them came with weed from Colorado. I did the run in my office in one of my machines. They purged it while I went home, and we took that in and entered into the hash competition of the Cannabis Cup in Amsterdam.”

Emo and a group of friends from America entered their concentrates into the Best Hash from a Seed Company category.

“So I fly to Amsterdam, chilling with all my friends. It’s me, Nikka T, TerpX, TC Labs, Gold Coast [Meds]. We were all in the same hotel room more or less, hanging out with each other the whole time, soaking up the whole Amsterdam experience, having fun, seeing weed people that I knew and looked up to and all that. The night came of the awards, and we were going to watch the awards, and by this time, nothing about it was even about the competition anymore. I was just blown away, hitting all the coffee shops, making all the new friends, trying all the new products and the strains and stuff that are big in Europe that aren’t big here. And they start calling off the winners,” he said.

“It was Whitewalker OG from Gold Coast, which was one of the homies we were out there with, so we’re like, ‘Oh my God! Fucking won third, bro.’ Just fucking pushing him towards the stage, pushing their crew up on stage. Now these are OG homies of mine that have been made millions of dollars by now, today. That was their first win at anything, first, second or third, but none of us in the group had ever won anything. And they call out second place. And it’s my homeboy Nikka T, another one of the guys from our hotel room. And I’m like, ‘Oh my God! We fucking got another one.’ And now, at this point, the thought that I’m going to win is the furthest fucking thing from my mind. Two of my friends have already won. Like, all the Cannabis Cup trophies from this category can’t go back to the same room tonight, you know what I mean? It’s statistically impossible. They call out first place and they call out TC Labs \ TerpX \ EmoTek collab, first place.

“And this is on video on YouTube somewhere, I could probably find it if I looked real hard, but there is a room that’s got about 600 people in it, and all you hear over everybody talking and the loud speakers, you hear from the far left-hand side of the stage, you just hear somebody go, ‘Woo!’ It’s me. I screamed so loud, I scream over the entire fucking crowd, and I went up on stage and I won my first fucking Cannabis Cup. That was me and my homies that were all trying to do the same thing, won one together. It sounds kind of cheesy, but nothing was ever the same after that. I got the brass ring. I proved exactly what the fuck I meant. It wasn’t just a Cannabis Cup. It was the fucking Amsterdam High Times Cannabis Cup.”

Since that time, Emo has collaborated on concentrates that have snagged an additional four Cannabis Cups.

“We got a fucking trophy,” Emo said. “I still have the card that Bobby Black was calling the winners off of. The first, second and third on the back of a bunch of postcards.” 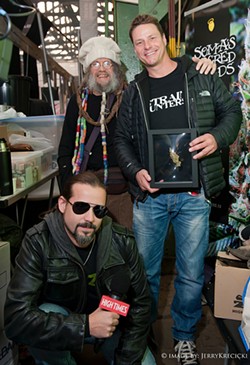 Bobby Black was with High Times from 1994 to 2015. He started as a designer but became a writer and editor and was involved in operating the Cannabis Cup for two decades before leaving the company.

“I started in ’94, and that was actually the first year that the Cannabis Cup was open to the public,” Black said. “Before that, the first six years, it was a private event. The cup was created by the former editor-in-chief Steve Hager. He created it as a little private competition with the seed companies in Amsterdam and some of his close friends, just like the top VIP people in the community at the time. And then the seventh one was the first time they opened it up to the public. So it was wild because I had just been hired at High Times as an intern in September, and that November, they asked me, ‘Do you want to go to Amsterdam and work at this event, the Cannabis Cup?’ I had never even been on an airplane before, let alone out of the country. I think I was like 19 or 20 at the time. And I’m like, ‘Fuck yeah I wanna go to Amsterdam.’”

The first Cannabis Cup was disorganized. It was raining; it was a small crew, but they pulled it off.

“It was a trial by fire, for sure. … I went to pretty much every Cannabis Cup over the years until I left. I only missed like two or three out of all of them,” Black said. “But, you know, back then the Cannabis Cup only took place in Amsterdam. It only happened once a year in November. And it was something that the entire staff of the magazine worked on and looked forward to every year, like we would plan, build towards it. And everybody would get excited as we get closer and closer. Pretty much the whole staff got flown over, and we all flew together on the same flight, you know, and it was this whole big camaraderie thing. It was a really, really amazing experience. And the cups really meant something back then to win a Cannabis Cup. It changed people’s lives, it changed people’s careers and it was a very prestigious thing.”

Then the Cannabis Cup came back to the United States.

Editor’s note: This is the second part in a series about the first Oklahoma Cannabis Cup.