Not even allergies could keep me from Hatch’s Bananas Foster pancakes.

I cannot tell you when my allergic reactions to bananas began. I used to eat them all the time. Then, one day, I ate a banana and noticed my ears itching — from the inside. My throat would get a tickle, too, and my chest felt like it was pumped full of air outside my lungs.

I do not eat bananas anymore.

Then I was eating lunch at Hatch, 1101 N. Broadway Ave., and a friend shoved a bite of gooey Bananas Foster pancakes (two for $9) at me and, as is my instinct, I ate it.

“Oh no! I forgot about your banana allergy,” she said, waiting for me to die.

But I didn’t hear her. The itching in my ears hadn’t yet started, but a voice inside me clearly told me to take another bite.

Hatch’s pancakes are glorious. Fork-tender and so golden they practically glow, the pancakes are some of the best in the metro. As good as they are sans toppings, the Bananas Foster version comes topped with caramelized bananas, candied walnuts and a salted caramel Myers Dark Rum sauce that is so addictive it might count as a Schedule 1 controlled substance.

I would ask my server to leave the bananas off next time, but that would mean not ordering something new. If that sounds easy to do, you haven’t been to Hatch.

The restaurant comes from the minds behind Broadway 10 Bar & Chophouse and Sidecar Barley & Wine Bar and, like those concepts, has a menu that runs deep with delicious, flawlessly executed ideas.

As an opening salvo, chicken-fried eggs (three for $7) are remarkably well done. The kitchen staff soft-boils eggs, dips them in batter and flash-fries them. The whites are set, the crust is golden and crisp and a poke with a fork is all it takes to get the yolks flowing out onto the plate like some kind of luxurious lava. One tip: Get an English muffin on the side for $1. Letting that yolk go to waste is unthinkable.

That last one is part of what made Benedict Johnny ($11) one of my favorite new dishes.

The base is a pair of griddled grit cakes stacked with beer-braised pork, poached eggs, chipotle hollandaise and a chorizo and red chili sauce. I mean, did the staff at Hatch read my dream journal? (If so, I hope they’ll keep all that stuff about Tom Hiddleston to themselves.)

The spice level never gets uncomfortable, but the slowly rising heat drives bite after bite. It’s a substantial dish, but one you can’t help but finish.

Chieftain’s Revenge ($10), which turns up the heat with a tomatillo salsa and spicy grits, is hotter. The beer-braised pork is juicy and rich, and the avocado salsa adds even more decadence to the fried eggs and salty Cotija cheese.

What really makes the dish for me are the grits. Seasoning is key to making a great bowl of grits, but most restaurants are gun-shy when it comes to adding enough salt and spices early in the process.

Hatch seasons grits with confidence, and it comes through in every bite.

Burro St. Nick ($11) has a bit of New Mexican flair with its Christmas sauce. One side of the burrito is covered with green chili sauce and the other is covered with red chili sauce. Inside the flour tortilla is that mouthwatering beer-braised pork, three scrambled eggs, hash brown tumblers and sautéed peppers and onions.

While chicken and waffles ($10) are becoming more common on brunch menus, Hatch’s version deserves attention for its ultra-moist fried chicken breasts and the mix of black pepper cream gravy and Cholula hot sauce that covers them. The waffles with bourbon maple glaze are wonderful, but the chicken and gravy is where it’s at.

Hatch’s sausage biscuit ($7, including a side) ruined me for other breakfast sandwiches. Wrapped like a familiar version one might get from a drive-thru window, the sandwich is made using the restaurant’s extremely buttery biscuits, scrambled eggs and a thick sausage patty with all the fatty flavor I crave. Smoked cheddar and pepper jelly round out a sandwich that might have fallen apart if it hadn’t been devoured almost instantly.

If you’re enjoying a boozy breakfast, I recommend a Café Oh Hey ($8) made with Patron XO Café, Prairie Wolf Dark, milk and a shot of espresso. It somehow wakes you up and makes you crave a nap all at once.

Hatch has quickly become one of Oklahoma City’s favorite breakfast and lunch spots, and honestly, I wish it would open for dinner, too. 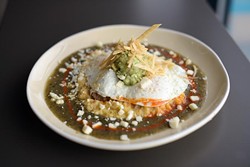 print headline: Shell raiser, Hatch’s bevy of lively breakfast dishes are reasons to get out of the nest in the morning.

What works: Chieftain’s Revenge and Benedict Johnny. What needs work: To-go orders are a little slow. Tip: Tables in back often require a wait; open bar seating is much faster.