“Every week that goes on, I feel like we’re marching closer and closer to an Orwellian world,” Sanchez said. 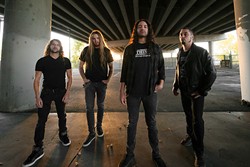 It has been nearly four years since Havok released a record, but the timing for its latest project has never been more appropriate.

In late January, the quartet released a lyric video for “Hang ’Em High,” its first new, original music in several years. Over a backdrop of fast, fist-clenching riffs, vocalist and lead guitarist David Sanchez aggressively calls out the lying, greedy powers that be as he repeatedly chants, “The enemy is not coming from overseas.”

“Every week that goes on, I feel like we’re marching closer and closer to an Orwellian world,” Sanchez said.

The frontman said he is happy to see George Orwell’s Nineteen Eighty-Four, a dystopian warning on the dangers of unchecked government control, rocket back into popularity nearly 70 years after the novel’s 1949 publishing date.

Fallout from a particularly contentious and polarizing election season has compelled Americans on all ends of the political spectrum to speak out about their personal beliefs. While Conformicide might be one of Havok’s most political releases yet, Sanchez has never been shy about injecting his take on the world around him within his own lyrics. Take 2013’s “Give Me Liberty... or Give Me Death,” a raucous and upbeat statement against government surveillance and censorship, as an example.

The band’s founding member is thankful fans have given him a platform to speak out on issues that matter to him. It is hard for him to relate to bands that choose to remain silent or neutral.

“I don’t know if it’s because they’re afraid to speak their mind or they don’t want to change their formula,” he said. “Maybe they’re afraid of what their fans will think if they go a certain way.”

Sanchez also does not hide himself from the raw fan feedback available on the internet. He was eager to read the YouTube comments on the band’s “Hang ’Em High” video. Sanchez seeks opinions from others. It was his band’s first new song after a long hiatus, and he wanted fans’ honest takes. The online feedback, he said, was largely positive.

Havok wrapped work on Conformicide in May. Sanchez said the lead up to its release in March is like trying to hold in an amazing secret from his friends.

“Sonically speaking, I think this is our best-sounding record,” he said.

Touring will have to hold Sanchez over until the day the band’s new music finally sees its release. He said he often hears from regretful fans who missed the show when the band came to their city.

Print Headline: Speaking out, Havok readies for its Thunder Alley show while preparing for its first album since 2013.

with Exmortus and guests