Rep. Kendra Horn was just sworn in at the beginning of January but is already preparing for the 2020 election as Republicans take aim at her seat. 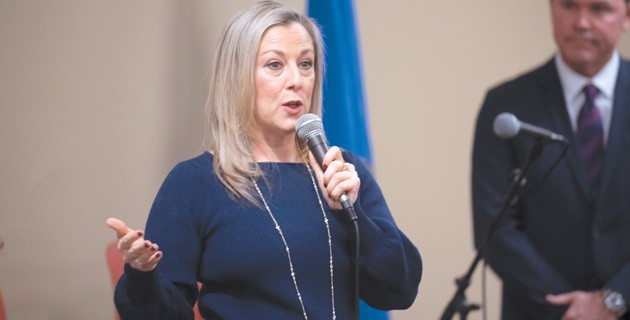 “I think we won because we met people where they were, because we went out to the communities, we knocked doors, we called people and we brought more voices into the narrative,” she said in an Oklahoma Gazette interview Saturday following her first town hall meeting since taking office at Cole Community Center, 4400 Northwest Expressway. “We reminded people that their voices are important and that they matter. … We ran on common-sense issues and things that matter to Oklahoma and Oklahomans.”

Horn, a fifth-generation Oklahoman, also adopted lessons she learned growing up for her campaign strategy.

“The bottom line that I heard all the time: one, we’re not allowed to say ‘can’t’ because that means you didn’t try, and two, if you see a problem in your community, you have to get to work to fix it. Don’t complain; just roll up your sleeves and get to work and fix it. That’s the approach we took to the campaign, and that’s the approach that I’m taking to serving in this capacity.”

Now, only a few weeks into her role in Congress, Horn is using the same strategy for 2020 as the National Republican Congressional Committee (NRCC) targets her seat, which is widely considered a toss-up for the next election. The NRCC is targeting 31 Democrats running in what they consider Donald Trump districts, according to an article on The Hill. The report says Horn’s 5th District is one of the most “ripe for the taking.”

“The seat is a very top target, but my number one priority is showing up to serve the people of Oklahoma’s 5th Congressional District and to be the best representative for every single person here that we can,” Horn said. “That looks like our office here in Oklahoma City being accessible and available to anybody who needs support and making sure that my staff is doing everything they can to be a part of the community.”

At the town hall, Horn briefed attendees on her time in Congress and answered questions from the audience. She plans to remain visible in the OKC community and will do so despite being a target.

“Regardless of whether or not I had a big target on me or not, I would be here showing up and serving,” she said. “That’s why I’m coming back to the district as much as I can, and that’s why we held our first town hall today and we will have ongoing events every single month. We will be in all parts of the district. I don’t think it changes who I am or what I’m doing. It might put a little more emphasis on it for people to pay attention.”

Though the NRCC already targeting her seat for 2020 does heighten the pressure, Horn said she plans to stay focused on her constituents.

“I ran because I wanted to help people, and the best way that I know to do that is to listen to and understand their concerns and to address them and to be as accessible as possible,” she said.

Most people who attended her town hall meeting were supporters, but some critics were there to ask questions too. Several people asked about the government shutdown and border security.

“In some places, that may include some form of a physical barrier. In many places, we need technology. There are sensors, there are drones, there are things we can do that will help to notify our border patrol agents on a more rapid basis,” she said.

She also talked about her frustration with the length of the 35-day government shutdown, which ended just one day before her town hall meeting. Horn said she was working on a solution to making sure government shutdowns would not happen in the future.

“I am every day speaking up and saying we have to fix this and we have to make sure it doesn’t happen again. That is my priority. I am frustrated with you and for you, and please know I am speaking up. I am reaching across the aisle, and I will continue to do that,” she told a federal contractor who asked why Congress wasn’t willing to work with the president to reopen the government. “We are in a position where we shouldn’t be. We should never have been there, and I’m concerned about that too. One of the things I’m working very hard to do with a number of different people is to find a pathway where we can make sure that this never happens again.”

“The seat is a very top target, but my number one priority is showing up to serve the people, Oklahoma’s 5th Congressional District.” — Kendra Horn tweet this

Horn emphasized the idea of unity and working across the aisle and echoed her campaign platform of common-sense reform.

“We have a lot more that unites us than divides us, and it’s easy to forget that when we get really caught up into partisanship or posturing,” she said. “It’s not about us versus them. Us versus them divides us, and that’s why it’s important to me to be a voice and to listen to everybody and to have the difficult conversations and make decisions based on what’s in the best interest of the greatest number of Oklahomans.”

Horn, who was sworn in Jan. 3, was appointed to serve on the House Armed Services Committee and the House Committee on Science, Space, and Technology. Horn has previous experience with space and technology, having worked for Space Foundation in Washington D.C. and Colorado for several years. She said space infrastructure is crucial to many areas of our lives.

“I’m excited to be able to be on the least partisan committee in the Congress and to be able to support our armed forces, and that includes space and space programs, which are really important. On the science, space and technology side, we’ve got NASA, we’ve got NOAA,” she said. “One of the things that gets forgotten oftentimes is the satellite infrastructure. We are incredibly dependent, as you might imagine. We’re talking on devices that are made possible by our satellites, we all use GPS to find our way around and from the weather perspective, NOAA weather satellites are what allow us to have the warning system that we have in place. … Space is fun and exciting, and it is also incredibly important, so I’m looking forward to doing a lot of good in that area.”

Despite having already started fundraising for 2020, Horn continues to focus on campaign issues and policies she believes in. One of her top priorities is education, though she also plans to address criminal justice reform and health care.

“Education and addressing pending student loan debt crisis is at the very top of my list. That’s critically important. We’re reaching a tipping point in people’s ability to pay their student loans and their ability to just do the basic things,” she said. “I’m working on some legislation on that front as well as supporting and making sure we were achieving the right balance in higher ed from our career tech system to our higher ed system and then making sure that we are sufficiently supporting our public education system from the federal perspective.

“I will also be working on a few other things, including some criminal justice reform measures. Health care is another thing. I think we’ve got to continue to address the significant cost of prescription drugs as well as a number of other critical issues. Those are just some of the top priorities, but I think that there’s lot that we’re going to be able to do in this Congress, and I am very much looking forward to it.”

Horn started a series of short videos titled Connecting with Kendra, in which she gives updates on what she has been working on in Congress. Videos are shared on her Facebook and Twitter pages.