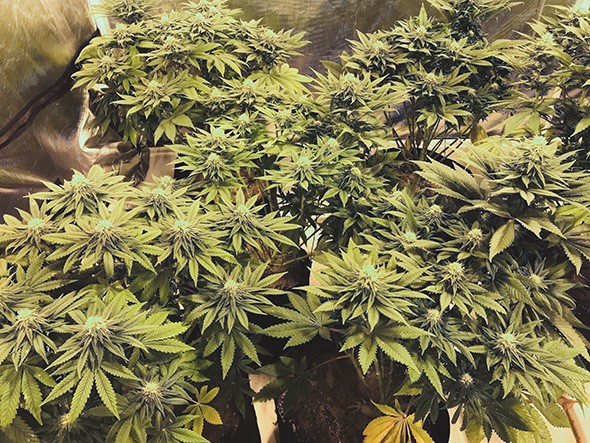 Two of the most well-known faces in the cannabis world make an Oklahoma City appearance this week.

Sierra Riddle and her 9-year-old son, Landon Riddle, will be at Steve’s Greens Cannabis + Wellness, 6715 N. May Ave., on Saturday.

Riddle made international news when she moved from Utah to Colorado to treat Landon, then 2 years old, with cannabis. He was the youngest medical marijuana patient in Colorado history.

Their visit will be the Oklahoma debut of the Riddles’ strain, Landon’s Legacy. Steve’s Greens is the only dispensary in the state to offer it.

This harvest of Landon’s Legacy yielded about a half pound of flower, Green Seed Farm grower Dan Wade said. Pre-rolls will also be available.

The first round of the strain boasts a THCA percentage of 10.9 percent, with 4.5 percent delta-9-THC and no cannabidiol (CBD). It has a complex terpenoid profile, with 1,298 micrograms per gram of beta-caryophyllene, or 27.8 percent of the total terpenes. There are also 980 grams of myrcene (21 percent) and 800 micrograms (17.1 percent) of linalool with 9.7 percent of cis-Nerolidol, 9.1 percent humulene and 8.7 percent delta-limonene. Pinene in alpha and beta forms make up 3.5 percent of the terpenoid profile, according to lab results from F.A.S.T. Laboratories.

“Landon’s Legacy is a high-THC medicinal cannabis strain, and it is something that we are very proud of and have worked on for quite a few years and it will be marketed as a strain that is fantastic for children with a multitude of health issues and terminal illnesses and will always be grown organically,” Sierra Riddle said. “I’m only allowing contracts with dispensaries that are going to do it the right way as well as give back to their local communities there because that’s what it’s all about. Part of my partnership agreement is that they — whoever wants to carry my genetics and have access to all of these amazing things — will donate 10 to 20 percent of those sales for those specific genetics back into my nonprofit, which will then continuously be able to help people in their communities. As well, we are an international nonprofit and so we help families all over the world with plant-based medicine as well as plant-based education.”

While Landon’s Legacy has no CBD, another strain, Landon’s Revenge, will have a much higher concentration. Riddle said they will also be providing those genetics to Steve’s Greens by way of Green Seed Farm.

“Landon’s Revenge is the second strain, and it’s just about ready to go as sending it across state lines and being ready for a full-blown production grow,” she said. “And that is going to be a high-CBD strain with a healthy amount of CBG, CBN and THC. And that will be also marketed mainly as a safe medication for children with illnesses and everything else but obviously works fantastically for adults as well. It’s just here at Landon’s Health Hut, we like to focus on children with terminal illnesses and life-threatening diseases.”

“It will be marketed as a strain that is fantastic for children with a multitude of health issues and terminal illnesses and will always be grown organically.” — Sierra Riddle tweet this

Before founding CannaMommy, Riddle became internationally known for moving to Colorado treat Landon with cannabis after he was diagnosed with acute lymphocytic leukemia. After chemotherapy and pharmaceuticals failed to help, they sent Landon home to die. She drove from Salt Lake City to Colorado and began medical cannabis treatment. After years of medical and legal battles, Sierra and Landon travel and participate in medical cannabis discussions around the country.

“Landon now is going to celebrate seven years cancer-free this year, which also will mark five years past any medical treatment, which is what the medical community considers cured,” she said. “For Landon, we’ll be cured medically this year, and he is the first and only child to have successfully survived childhood leukemia without the treatment.”

However, because of the myriad issues that Landon still suffers after such a debilitating illness and the side effects of chemotherapy at that young age, he is still using cannabis — and only cannabis — to treat his symptoms and illnesses.

“We have our one-year anniversary party, so we’re celebrating a full year of being in the cannabis industry in Oklahoma,” Stephanie Mathis said. “Who knew I’d ever be saying that?”

Stephanie and her husband, Dustin, founded Steve’s Greens as a CBD store that has evolved into a cannabis dispensary.

“I’ve always been a huge cannabis advocate,” Mathis said. “It’s always been something that I’ve felt very passionately about, not just in the medical side of things, but also just in the textiles and the environmental side of things and getting our resources from hemp instead of trees and things like that. So I’ve always been a huge advocate for cannabis and legalization, and knowing that it’s starting to come to Oklahoma, I just had to jump on board.”

Steve’s Greens was not one of the first dispensaries with cannabis for sale because Mathis wanted to wait and make sure everything was legitimate Oklahoma product. While about a third of the flower it carries comes from Green Seed Farm, the grow the Mathises own, Steve’s Greens carries a wide variety of other products from the CBD and medical marijuana space. And Landon’s Legacy will be the newest product added to shelves.

“The terpenes are just through the roof,” Mathis said. “It’s got some of the highest terpene profiles I’ve seen in any strain. And then the high trichomes. We’re hand-trimming everything to keep those trichomes intact and to make sure it’s just primo. And this next round, we’re hoping to get definitely a higher THC profile than we did on the last round. [We] pulled a bit early last time, so that was kind of our trial. First harvest is always the fun one where you can learn a lot. It just made sense to bring Sierra and Landon to the release.”

The event kicks off at noon. Noon-6 p.m., there are workshops, including a cannabis law Q&A with J. Blake Johnson, a cannabis cooking demonstration with chef Tony Freitas, growing basics with Lucky’s Grow Supply, cannabis vaping and terpene education with Simple Cure and a talk on concentrates with Pot County Extracts. All the workshops are free.

There are also giveaways throughout the day and a patient drive with Green Hope Wellness Clinic.

Multiple vendors will be on hand, and there will be live music sets by The Suspects at 2 p.m. and 4:20 p.m.