The Oklahoma cannabis market is roaring, with the number of patients snowballing and dispensaries clambering for market share.

That means there are now more medical marijuana cardholders in Oklahoma than there are people in Muskogee and more applicants than the entire population of Enid, the ninth-largest city in the state.

The demand has increased so much that OMMA had to shut down its call center and apply that manpower to processing applications, spokeswoman Melissa Miller said.

“The last week of January, we got over 4,000 patient applications in one week,” Miller said. “And back in September, it was closer to 1,200 applications a week of patient applications, so it’s just steadily kind of increased and then just recently, it seems to be ramping up even more. So we’re just making sure we can get those processed in the 14 days and in order to do that, we needed all hands on deck.”

That means pockets of concentrated dispensaries in various areas of the city and even some neighborhoods. Gaia’s Favor, 2507 NW 23rd St., sits on the northeast corner of NW 23rd Street and Villa Avenue, directly across the street from Rabbit Hole, 2500 NW 23rd St.

Gaia’s Favor has an online ordering system to serve patients. They go online, select their purchases from the inventory, place the order and receive a message when it’s ready for pickup.

“When you wake up in the morning, if you know you’re going to want something after work, you can send a message that says,  ‘Hey, I’ll be in at this certain time to pick it up,’ and it will be ready for you whenever you get here. All you have to do is come up to the counter, pay for it and you’re on your way,” owner Shawn Carson said.

“It’s easier than always having to call four or five dispensaries,” Carson said. “The market’s not very mature right now. So things like tinctures and new edibles and stuff like that are always coming out. You want to be informed.”

Patients can also sign up for a system that texts them about new arrivals in the dispensary, broken down into categories. Tied into both the ordering and customer database is a rewards program. A first-time patient gets 50 points the first time they sign up. Afterward, each time a patient walks into Gaia’s Favor and logs in, they earn 20 points, even without a purchase.

The flower in-store is a combination of strains grown by Carson and those purchased from trusted growers. 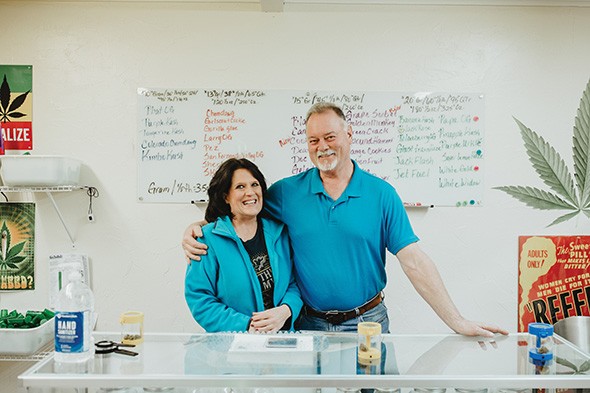 Down the road at The Greens of Central Oklahoma, 3401 NW 23rd St., the name of the game is quantity and ease of location. They topped out at about 40 strains ranging from $10 to $20 a gram, co-owner Sam Folmar said.

“We’ve got it all. There’s no need to go somewhere else,” he said. “Come up here and get it all and be on your way.”

The Greens of Central Oklahoma purchases from multiple growers but does not grow its own flower.

If patients want larger quantities and variety at the same time, The Greens of Central Oklahoma will allow people to break purchases down by grams at the same price point.

“That’s not going to go on forever, but for right now, it’s giving people opportunity to try out different things and not have to buy one and come back 50 times to try out everything,” Folman  said.

Another concentrated area for dispensaries is NW 39th Street. Green Leaf Supply Co., 4417 NW 39th St., carries only a handful of strains, but all of them are grown at its own farms in Oklahoma City and Wanette, co-owner Rob Atkins said.

“Our vision is to become as vertical as possible so we can control the quality of our product,” he said. “We feel like that’s the only way you can honestly control what you’re prescribing to customers — the quality of your flower, your concentrates, all that stuff — is to be hands-on and doing it yourself.”

Atkins said he tried to lure processors from states where cannabis is recreationally legal to come to Oklahoma and work but was turned own. Instead, he hired two of them to come out and teach their extraction processes so they can handle production of their own specialty products like diamonds, which are pure THCA crystals. Three months after flower has become legal in the state, diamonds are still a rarity. Atkins knows of only one other processor in the state currently making them.

Across the city, S. Western Avenue is also becoming a hotspot for dispensaries, with a handful of dispensaries along the road south of Interstate 240.

Green Plus, 8613 S. Western Ave., is luring customers with two specialties: the $150 ounce and, soon, an in-store press for home concentrates.

“Right now, this is a bit of a market share grab, so that being said, that’s where we kind of wanted to make the decision to do the $150 ounce,” said Gary “Turbo” Webb. “Come hell or high water, no matter what, you walk into the Green Plus over here, you’re going to get your ounce for $150 on Western.”

Webb, a former on-air personality for KATT under that moniker, is now the store manager at the Western location.

“Talking to a lot of the patients that come in, they’re all kind of really interested in doing their own concentrates. And so us securing a nug smasher and providing a nug bar for them to do that is, like, a big deal,” Webb said. “They can’t bring their own flower in and have it smashed because it’s something of a health hazard or whatever. So, as I understand it, they can buy the flower from here, from us, and have it smashed on location.”

They do not plan to charge for the service.

“It doesn’t really cost us anything to do but a little bit more time, so why not give somebody an option?” owner Steve Fritz said.

Regardless of tactics, dispensaries will still be competing with stiff and growing competition for the foreseeable future. The good news is that there might also be more patients to serve than previously expected.

“We thought we’d be getting close to 80,000 perhaps in the first year, but you know, we’re five months in at 50,000, so we might exceed the upper end of our estimates,” Miller said. “We’ll see. It’s possible it could slow down too. You never know.”