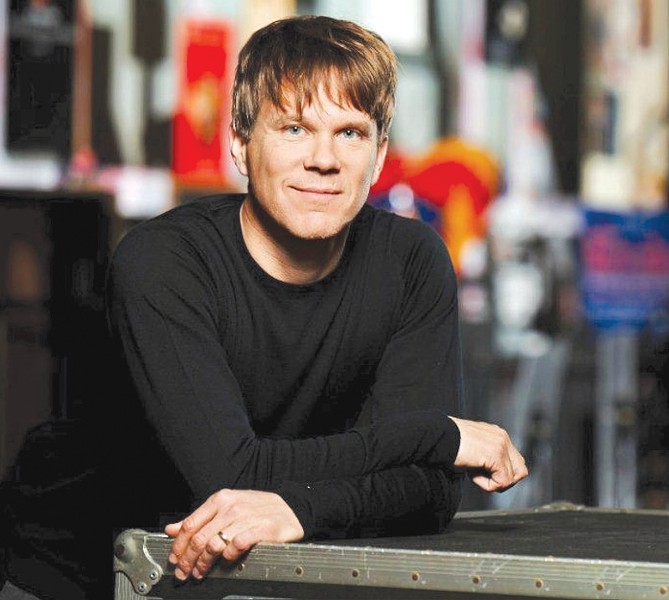 Though the baton was officially passed to Mickelthwate in May 2017, the German-born maestro has spent the last year acclimating to OKC, diving headfirst into its accelerating world-class amenities and getting to know an array of locals, hotspots and possibly future collaborators as he settles into the establishment’s 31st season of programming.

As Mickelthwate shared the classics programming in 2017-18 with Oklahoma City Philharmonic’s Joel Levine in his 30th and final season, he prioritized setting the stage to get to know his future home in and outside Civic Center Music Hall with sights set for pairings that will be music to all ears.

“The thing with classical composers is that they’re all dead,” Mickelthwate said. “They aren’t around anymore. These are pieces that are all exciting, but I think of it as they are, in a way, a living museum somehow. I love to figure out a way to put [them] into a real context, take something that was written 200 years ago and then pair it with something contemporary by a living composer hopefully to kind of make it current as much as I can.”

This season opens with The Rebels, a compilation of composers enlightened by revolutionary transitions of their respective generations. Mickelthwate explained the process behind selecting the pieces in the Classics 1 collection of 2018, calling the chosen Beethoven piece (Symphony No. 9) the mastermind’s most famous work, with the “rebellious” factor being that was the first time that any composer added a big chorus and four soloists to the orchestra.

“So that was new,” Mickelthwate said. “That was revolutionary at that time. And also the size of the orchestra itself and the length of the piece was revolutionary. There was never a work written that was so long for symphony orchestra. So it was beyond at that time, it was crazy to write something like that.”

The Rebels pairs Beethoven with modern-day artist Tan Dun, a living Chinese composer who wrote the film music for Crouching Tiger, Hidden Dragon. Tan’s Secret of Wind and Birds incorporates the “newest instrument,” Mickelthwate calls it, a cellphone, and then creates a dialog of sorts by using audience participation — something that, in any other performance, could be seen as revolutionary, but not in the best way. Really, don’t do it unless you’re a preselected audience member — the only acceptable usage per Tan’s original intention. Wild Individualism, Classics 2, will feature Sergei Prokofiev’s Concerto No. 1 for Violin in D major and Gustav Holst’s The Planets Oct. 6 with solo violinist Simone Porter.

“These are pieces that are all exciting, but I think of it as they are, in a way, a living museum somehow.” — Alexander Mickelthwate click to tweet

The new year will bring an air of Independent Creativity Jan. 26 as an ode to the Frankfurt, Germany, native’s German and American influences, incorporating stateside composers including a lauded, contemporary female composer and work from a classical European genius. This piece, Classics 3, will bring an Oklahoman back home for a night to remember. Jennifer Higdon’s present-day Concerto for Harp and Orchestra was commissioned for harpist and Norman native Yolanda Kondonassis and premiered in Rochester, New York, earlier this year. Also included are performances of Brian Eno’s An Ending (Ascent), Leonard Bernstein’s On the Town: Three Dance Episodes and Wolfgang Amadeus Mozart’s Symphony No. 41 in C major (Jupiter).

“This selection is important to me because if you look at it [over centuries,] there are many male composers,” Mickelthwate said of Higdon’s work. “But things are changing now and I hope to bring more female composers and she is one of them. And Yolanda is from Oklahoma. So this is awesome for me.”

“One of the things I’m trying to do is to connect with American Indian culture and their rich history,” Mickelthwate said. “And find, in this case, a composer and reflect that when I can. Build a relationship through music and create new ways to come together in a way.”

The Pops program keeps it local by kicking off in mid-October with season six American Idol alum Melinda Doolittle, the former Tulsan whose vocals cross genres from Broadway to soul. Fans of the petite powerhouse can mark Oct. 12-13 in their calendars to see this star in action.

Nov. 29-Dec. 1 might be the catalyst for many holiday traditions this year, as the Philharmonic presents The Christmas Show, complete with Broadway star Nikki Renée Daniels, The Philharmonic Pops Chorale, The Mistletoes and Santa himself.

Pops will revel in nostalgia in 2019. Revolution: The Beatles Symphonic Experience Jan. 4-5 pairs fab classics with rare photos of the band. New York-based The Hot Sardines turn Civic Center Music Hall into a speakeasy Feb. 1-2 with period jazz from the 1920s, and Paul Simon’s 1960s classics receive the symphonic treatment March 1-2 with The Sounds of Simon and Garfunkel. The final Pops performance of the 2018-19 season, E.T. The Extra Terrestrial in Concert, features the magic of John Williams’ Academy Award-winning score as performed by the full orchestra and set to an HD projection of the feature film. Mickelthwate said the result is an intense, powerful experience.