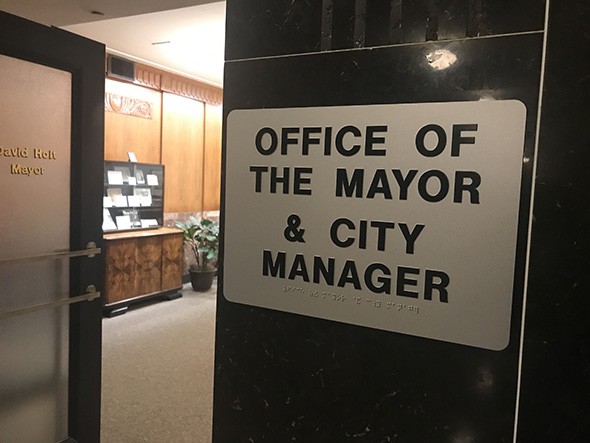 Since city manager Jim Couch announced his retirement on Sept. 17, Oklahoma City Council has addressed the issue of finding a replacement in each of its public meetings.

The recommendation is necessary, Shadid said, since sometimes it is not what you know that gets you hired, but rather who you know. However, Shadid said he doesn’t think city council would pursue a buddy system hiring process in this instance.

“We all seem to be on the same page of wanting the best candidate and wanting to ensure that finding that person is done fairly and objectively,” he said. “This is the most powerful unelected position in the city, so we can’t just have a coronation.”

Oklahoma City’s new city manager will take on the role of managing a $1 billion budget and overseeing more than 5,000 employees, Shadid said.

Appointing a city manager is and always has been done at the sole discretion of the city council, according to Oklahoma City human resources director Dianna Berry.

A flood at Oklahoma City’s municipal building a few years ago damaged applications received before Couch’s appointment almost 20 years ago, Berry said. However, she said that interest in the position this time around is likely higher than in past years.

"This is the most powerful unelected position in the city so we can’t just have a coronation."—Ed Shadid tweet this

“As our city grows, interest in it also grows,” Berry said. “There are a lot of exciting things happening in Oklahoma City right now and I can certainly see the appeal of this position.”

So far, Berry said, 24 applications have been received and half of those were submitted on the day the job posting went live.

Some applicants reside in Oklahoma and some are from out of state, Berry said.

Council members decided to make the search a national one after discussions became heated during the Sept. 25 meeting.

“I’m guessing that the majority of people interested in this job already know about the opening,” Ward 1 council member James Greiner said. “So I would push more towards a quicker time frame (to receive applications).”

“I vehemently disagree,” said Ward 7 councilman Lee E. Cooper. “Certainly people here know that Mr. Couch is retiring but I don’t know that this is yet national news, so I feel that additional time is needed.”

Ultimately, Berry said, council members decided to post the job announcement and application online from Oct. 1 until Nov. 1, when all applications are due.

Once all applications are received, Berry and her team of city human resource employees will create spreadsheets for each candidate that detail each candidate’s experience and whether or not they meet the council’s minimum requirements.

The applications and spreadsheets will be forwarded to city council members shortly thereafter and city council will begin its review process Nov. 6.

During the Sept. 25 city council meeting, Oklahoma City mayor David Holt said the council will aim to make a hiring decision before Couch’s effective retirement date of Jan. 2, but can take longer if needed.

“This is ultimately our process,” Holt said. “We can come to a decision as early as Nov. 6 or we can take years to decide. We’ll take however long we need to.”

Couch said if city council has not hired a new manager by Jan. 2, it can appoint an interim city manager until a permanent one is found.

An announcement of the open position and a link to the application has been posted online through four different platforms, Berry said.

The most effective tool in recruiting out of state applicants, Berry said, is the International City Managers Association.

“With the opening posted there,” Berry said, “we are receiving national attention.”

Berry said applicants should have a high degree of managerial experience and preferably some experience in government as well.

“There are always exceptions to the rule, but more often than not, city managers have some form of previous experience working in government management,” Berry said.

Listed qualifications for the position include knowledge of municipal budgeting laws, managerial experience and the possession of a bachelors degree and a valid drivers license.

While the online job announcement states that a salary is dependent upon qualifications and experience, Couch currently receives an annual salary of about $250,000.

“Jim Couch has set the bar high for Oklahoma City,” she said. “Because of that we can now ask for more from applicants.”

During the Oct. 9 city council meeting, council members went around their table to give praise, prayers and final farewells to Couch.

“The hardest job we’re going to have is figuring out how to replace you,” Ward 6 councilwoman Meg Salyer said to Couch. “Everywhere I go from the grocery store to walking on the street, I get asked by people how we’re going to find someone to fill your shoes.”

Couch reminded city council that Oklahoma City’s form of government is a council-manager one where the manager works to execute recommendations and mandates by the city council, and not the other way around.

“I have no doubt in you,” he said to the council. “I know you’ll find the right person for the job.”