Four years ago, gardener Jenn Mabry looked at the vast array of gardening plots near the Chesapeake Energy Corporation campus off 63rd Street and Shartel Avenue and thought, “There is no way I can do this.”

After sitting neglected for a year and a half, the garden that employees once used to grow produce was overgrown and full of weeds.

“This is my home, and it’s been my creative outlet,” Mabry said.  “I started it from ground up; I didn’t think there was any way I could do it. I cried for the first six months, and then got friends to help, and we reached out to the community.”

With the help of volunteers, Mabry now oversees an organic TLC Donation Garden, 6212 N. Shartel Ave., full of produce, herbs and flowers that fill 42 of the garden’s 63 plots. She harvests on Saturdays, Mondays and Wednesdays, and the garden offerings shift depending on the season.

Apples and pears grow on trees that line the garden’s entryway arches while squash and blackberries grow on the opposite end of the property. In the winter, the garden switches to seasonal greens and root vegetables. It is able to grow other crops using low covered tunnels and frost blankets.

On any given day, there are between one and five full-time volunteers at the garden, which donates much of its produce — about 5,000 pounds last year — to Homeless Alliance and BritVil Community Food Pantry.

“Food pantries and shelters never really get much fresh produce,” said Kinsey Crocker, director of communications at Homeless Alliance. “People usually donate canned goods, which we need, but it’s really good to get things like apples, radishes, Swiss char and cabbage. We serve about 300 people a day, so we need all the help we can get.”

Work around the garden is bolstered on the weekend and on Wednesday nights as Mabry welcomes groups from local churches, Girl Scouts and other eager community members. Every other Saturday at noon, Mabry hosts classes designed to get people started on their first home gardens or make ones already in progress flourish.

June 30, Mabry hosts a class to fight pests without using chemicals. A July 14 class gets people ready for a fall garden, and the July 28 class provides tips on how to grow transplants at home.

“We want to teach them how to garden sustainably and organically,” Mabry said.  “We want to increase visibility of the donation garden by drawing them here.  We have volunteers that come back to help after [being introduced to the garden during] classes because they are excited about the concept.”

Crocker said they she started a home garden after first getting involved with the donation garden.

“[Mabry] teaches them stuff that they can apply at your own house, but they’re also helping out the Homeless Alliance food pantry, so it is a win-win-win,” she said.

One of the keys to keeping the garden pesticide-free is to attract pollinators like bees and butterflies, but also to bring in wasps, which sting and deflate species of worms invasive to tomatoes and cabbage. Another method of organic farming is companion planting.

Borage, a flowering edible plant that tastes like cucumber, grows next to a tomato plant and helps deter the tomato hornworm. Mabry said basil grown next to the tomato plant improves the tomatoes’ output and flavor.

“We don’t use any chemicals, so we do a lot of hand-picking for insects,” she said as she picked. 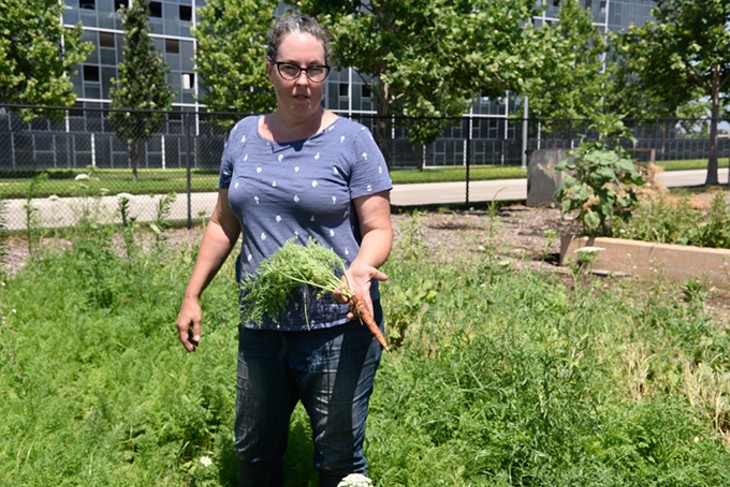 Local Girl Scout Troop 577 got involved with the donation garden and helped transform the first plot that Mabry brought back to life when she took over the garden four years ago. They have transformed it into a demo garden for use at a home, complete with flowers, herbs, vegetables and a fountain. The Girl Scout troop earned its bronze medal for the project but still returns  to the garden regularly to volunteer.

On a Saturday in early June, the troop was helping create ornaments made out of cardboard and topped with mirrors and brightly colored ceramic shards to attract birds and helpful insects. The troop then trained their attention on building trellises and making butterfly watering stations.

“Insects get tired and they need to rest for water, just like us,” Mabry told a young volunteer.

Girl Scout mom Kayla McNeill and her daughter Skyler have begun planting strawberries, cucumbers, asparagus and onions in their home garden after picking up tips from Mabry. Before getting involved with the garden, McNeill said Skyler daughter didn’t want to eat many vegetables.

Mabry works for TLC Garden Centers, which maintains the donation garden, and Chesapeake still owns the land but allows TLC to work it. The donation center is kept alive through donations collected during its biweekly classes and the power of volunteers.

“If I don’t have volunteers, this doesn’t happen,” Mabry said. “I could maintain three plots on my own.”