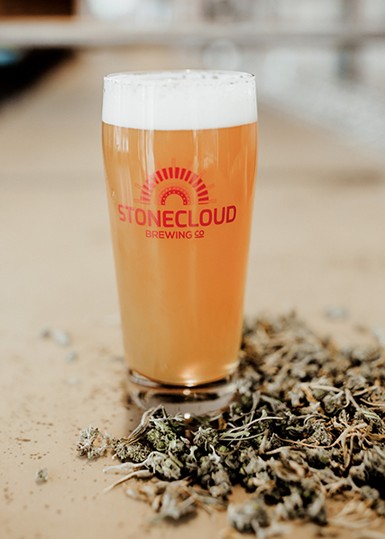 Oklahoma City is about to gets its first taste of hemp-infused beer thanks to two downtown business neighbors joining minds.

“Joel [Irby] was giving us a tour of his brewery, and literally in the middle of the tour, I’m standing there, staring at him, and I’m like, ‘Joel, we should make a hemp beer. What do you think?’” said Redbud Soil co-owner Chris Brady. “And he was like, ‘That sounds awesome.’ And I was like, ‘So if I bring you a pound of flower, we can do this? And he goes, ‘Yes, sir,’ and that was it. That was literally the whole thing.”

The beer will be brewed like a normal IPA and then infused with the flower. Hemp is a member of the cannabis sativa family and is used to produce cannabidiol (CBD) without concentrated amounts of the psychoactive compound tetrahydrocannabinol (THC) that would be found in medical marijuana.

“Infusing it will be similar to making cold-brew coffee a little bit,” Irby said. “Basically, you just soak the pretty-much-finished beer on the hemp itself. That’s really the easiest and best way to get that that sort of flavor and aroma. You’re not worrying about boiling off any of the cool aromas or anything like that.

“We do a lot of beers that have been infused with one thing or another. The most common is hops. Pretty much every beer has hops in it, but then we’re also dumping more hops into finished beer to get more aroma and flavor. But then we also do it to specifically, like, a big barrel-aged stout, so we will infuse them with, like, freshly toasted coconut or cacao nibs or malted milk balls for one beer. I mean, we do a lot a lot of fun stuff like that.”

The IPA will be the first of an ongoing hemp-infused beers series available in the brewery’s taproom.

“We wanted to get the hemp in first so we could smell it,” Irby said. “And it’s just, like, super. It’s got this amazing aroma, almost like kind of a mix between, like, hops, wheat and incense. But it’s really cool, really floral. Once we smelled it, we thought it would go really well with the already-pretty-hoppy beer, so I think they’ll kind of, like, accentuate each other. With something like this, you also don’t want the beer to overwhelm the hemp because we really want it to come through and be cool. This is also my first time working with hemp, so we will see how it turns out. I mean, I’m pretty stoked and pretty confident it’ll be awesome. But we’ll do it this time and see how it comes out and maybe tweak things again whenever we make it again.”

The ale will be made with 2,000 pounds of malted barley crushed and mixed with hot water to create mash.

Enzymes will then be added, breaking the barley down into a sugary water to make “wort.”

“Wort is the basis of beer, but it’s unfermented, so it doesn’t have any alcohol in it,” Irby said.

It’s boiled briefly, and hops are added and then chilled at 65 degrees in a fermenter.

After three weeks, the batch will be ready to be soak in a pound of hemp of the Magic Bullet strain.

“It’s actually from a good friend that is a hemp breeder, and it is a nice, quality product, but I didn’t do it strain-specific for this project,” Brady said. “Just was looking for the best quality that we could in general.”

After five days, Irby said, the beer will then be carbonated and ready to serve.

The first batch is expected to be one barrel — roughly 30 gallons or 250 pints of beer. Pints of the 6.5 percent alcohol by volume brew will be available in the taproom Friday. It will be priced at $7 a pint.

“It’s a little bit more of a pain to make, which is why we will charge a little bit more for it than our standard IPA, but we’re not trying to gouge anybody,” he said. “I hope it lasts about a week or so. But you know, I mean, you never know. Sometimes we have beers that I think are going to sell out in a day and it takes three weeks. Sometimes something sells out in an hour that I think we’re going to have around for a couple weeks, so I hope at least a weekend. A week would be awesome, just so more people have the chance to try it. It’ll be gone pretty fast, and then we’ll tinker again and make another round.

“We have kind of our core beers that are the same every single time. But then we have a lot of taproom releases where we’re doing, like, all sorts of wild and crazy stuff. And if you’re only making a small amount and it sucks, you can dump it down the drain. But if it’s cool, you can serve it for a couple weeks in the taproom. And, you know, maybe at some point that will become a year-round core beer. So that’s kind of how we test that stuff.”

“From a business standpoint and just what’s going on in general in the United States and what’s going on in Oklahoma, you know, it made a lot of sense for both of us to collaborate, do something like that,” Brady said. “It’s a hot topic. It’s on everybody’s, you know, the tip of their tongues right now. Everybody’s talking about it, especially with the passage of legalizing hemp in the United States, so it just made a lot of sense and it clicked when I was standing there, and I’m glad it clicked with him as well.”

Beer Advocate lists only 46 hemp beers in North America, six of which have been retired. RateBeer.com has 50 listed worldwide and another half-dozen of which are no longer available.

The Hemperor, an “HPA” or Hemp Pale Ale from Fat Tire Brewing in Fort Collins, Colorado, is also available in Oklahoma.

“You do see other breweries across the country that have done, you know, a few things like this, but it’s definitely not widespread, and obviously, it’s never been done in Oklahoma,” Brady said.