Until We Organize chronicles the ERA’s past and might offer guidance for its future. 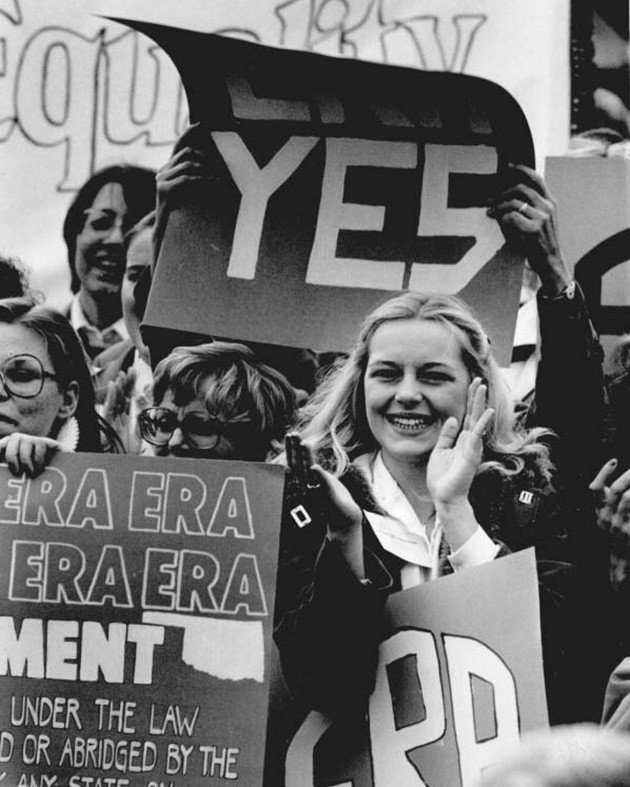 Until We Organize: The Struggle for the Equal Rights Amendment

In the 1970s and even into the 1980s, two dozen words conceived in the 1920s caused a national controversy.

“Equality of rights under the law shall not be denied or abridged by the United States or by any state on account of sex,” read section one of the Equal Rights Amendment (ERA). Section two gave Congress the right to enforce section one. Section three set a two-year time limit on its implementation.

“If you read it, it’s really short,” said Chelsea Burroughs, assistant curator of education at Oklahoma History Center. “All these fears that I think conservatives had were sort of channeled into something that really wasn’t all that controversial, and that’s always really interesting to me, how it became this image of something bigger than what it was when you really read it. There was this fear that it would change gender roles, essentially.”

Until We Organize: The Struggle for the Equal Rights Amendment, an exhibit chronicling the decadelong conflict over the ERA, is on display through November at Oklahoma History Center, 800 Nazih Zuhdi Drive. The exhibit is comprised of 23 photographs of activists on both sides of the issue as well as buttons and other artifacts, some contributed by former state representatives Wanda Jo Peltier and Hannah Atkins.

The ERA, authored by National Women’s Party head Alice Paul, was originally introduced to Congress in 1923, three years after the 19th amendment gave women the right to vote. It was, without success, continuously reintroduced to Congress until 1972, when it passed in the house (354-24) and the senate (84-8). By 1977, 35 of the 38 states needed to achieve the 3/4ths majority required for a constitutional amendment had ratified the ERA.

“Oklahoma was seen as a state that had a really good chance of it passing because the government was supportive; leaders in the house and the senate were supportive,” Burroughs said. “And the political climate in Oklahoma was a lot different in the ’70s. Not to say that it was less conservative, but we were still a Democratic majority, and that obviously has changed.”

Perhaps surprisingly, President Richard Nixon endorsed the ERA in 1972, and Jim “Snowball” Inhofe, who was then a state senator, was the first Oklahoma legislator to introduce a bill supporting it. But that bipartisan support of what basically amounted to a clarification of what “all men are created equal” really means did not last.

Stop ERA, an organization lead by anti-feminist activist Phyllis Schlafly and spearheaded in Oklahoma by Ann Patterson, introduced arguments over gender-neutral bathrooms and whether women would be eligible to be drafted into the military into the debate, which continued statewide for another decade. Though the clothes have changed in the years since the exhibit’s photographs were taken, Burroughs said the passion of the demonstrators both for and against the amendment is obvious and relatable to modern viewers.

“This was mostly in the ’70s, so there’s some great retro finds in there,” Burroughs said, “but probably my favorite ones or ones that seems most representative are the ones with activists at the Oklahoma State Capitol, just because it’s one of those iconic things that we can recognize still today, and it’s still a place where people gather when they want their voices to be heard. That was a place where both pro- and anti-ERA women constantly were during this period. It was also really contentious because that’s where they would often run into each other and face off. Otherwise they sort of never really came into contact with each other.”

Ironically, though Schlafly and Patterson “portrayed themselves as just housewives going out into the public to do the greater good,” they “cut their political teeth” on anti-ERA activism and “still remained in politics long after,” Burroughs said.

“Under the guidance of Schlafly herself, Stop ERA men and women in the state began organizing large bus trips to the capitol through their churches to protest the ERA and lobby legislators,” Burroughs wrote in a master’s thesis on the subject. “Schlafly was meticulous in her leadership skills and tactics, and she understood the importance of appearance. The training workshops Schlafly ran, in which she taught women how to dress, what colors to wear, what and how much makeup to put on, how to approach legislators, and how to handle criticism were all a testament to the importance of perception.”Ratification efforts failed again in 1982 — an event Schlafly called “the greatest victory for women’s rights since the suffrage movement” — but, Burroughs said, the pro-ERA movements encouraged Oklahoma women, such as Peltier, to run for office and insist on changes to the laws in their states.

“Even though it was never ratified and added to the Constitution, it did sort of force a lot of states to amend sexist legislation that probably would have taken longer,” Burroughs said. “As a way to get around ratification, some states just individually fixed legislation that had been on the books forever that we kind of take for granted, like the fact that women couldn’t open lines of credit in their own name and had to have their husbands cosign for stuff. In a lot of states, women were still considered dependents of their husbands, which created issues when they passed away if they didn’t have a will. … There’s not all these sexist statutes that people can point to today as necessity for it, but then again, all of those changes can be overturned by legislation, which is why people still argue for the ERA.”As of now, 37 states have ratified the ERA. Oklahoma Women’s Coalition executive director Liz Charles wants Oklahoma to be the 38th.

“I think we’ve come a long way since the dialogue in 1982,” Charles said. “One of the biggest obstacles is since it’s been so long, a misunderstanding that this is something that has already been done. … In addition to any sort of polarizing misconception about what the ERA does, the main thing is just communicating the urgency and the need for this and the fact that this is just the next logical step to what was done almost 100 years ago when we ratified the 19th Amendment giving women the right to vote. … The common phrase is history repeats itself, so in any of our advocacy work and policy work, especially with deeply emotional issues, like women’s issues and gender equality issues, it’s so important to look to the past. Maybe the subjects have changed or maybe the specific issues have changed, but the arc is the same.”

Studying the amendment’s past might give modern activists an insight to its future.

“What we can learn from history is that at times, when things felt very big and scary and unknown, looking back, we realized that we shouldn’t have been afraid of making that move,” Charles said. “We look back and see that those fears were made up. ... It only hurt us to not have the courage to do something that was right. ... We’ve created a whole new set of issues that we’re afraid of now, and I know that if we had an opportunity to look back in 20 years, we would think it was ridiculous, so let’s not let history repeat itself here.”