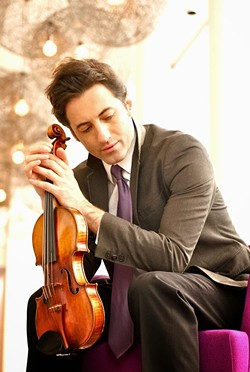 The Oklahoma City Philharmonic will take audiences on a journey of Progressive Wildness with a soundtrack provided by three Russian composers.

The concert opens with Sergei Prokofiev’s upbeat and rapturous “Symphony No. 1,” inspired by the works of Joseph Haydn and Wolfgang Amadeus Mozart before taking a tempestuous turn into Pyotr Ilyich Tchaikovsky’s “Francesca da Rimini,” the story of damned lovers from The Divine Comedy.

The evening culminates with a performance of Aram Khachaturian’s fiercely dramatic “Violin Concerto in D Minor,” featuring world-renowned violinist Philippe Quint. This will be the Grammy-nominated musician’s second performance with the OKC Phil.

Like many classical soloists, Quint came to music early. Growing up in the former Soviet Union, his grandparents had the idea of creating a family trio with his mother playing the piano and his uncle on the cello.

“At the time, I was convinced that violin was going to be my new toy that I was going to play with, break and move on to the next thing,” he said. “But my grandparents had plans for me I wasn’t aware of.”

Quint did take to the instrument, studying with famed Russian violinist Andrei Korsakov. With Korsakov’s untimely death at the age of 44 and the worsening economic and cultural situation in the Soviet Union, Quint’s family decided it was time for a move.

Upon arriving in America, Quint began studying with Itzhak Perlman’s former teacher Dorothy DeLay at The Julliard School, where he would eventually earn Bachelor’s and Master’s degrees.

A testament to his ability, Quint has been performing since 2005 with the 1708 “Ruby” Antonio Stradivari violin.

“For me, an instrument is a bit like a time machine,” he said. “I feel that I can sense the energy of performers that have played on Ruby before me, one of them being the great Spanish violinist Pablo de Sarasate.”

Quint has performed all over the world and participated in numerous critically acclaimed recordings.

Earlier this year, Quint made his own recording of Khachaturian’s “Violin Concerto” with the Bochumer Sinfoniker, allowing him to study the piece in depth.

“I am always fascinated by composers that were not violinists and did not care about the challenges a violinist might have with an un-violinistic writing,” he said. “For me, it is just another adventurous challenge of how to make it work.”

Quint described it as a magnificent — if somewhat underrated — work that is unique in how it explores and integrates Armenian folk themes into a traditional classical concerto form.

“It boasts a unique music language, tonal palette and extreme pyrotechnics with Paganini-like virtuosity,” Quint said. “It is a brilliant work that I am extremely excited to bring to the audiences in Oklahoma.”