Mary Mechanix just introduced its fall flavor of distillate cartridges. Seasonal offerings are a key component of its brand. 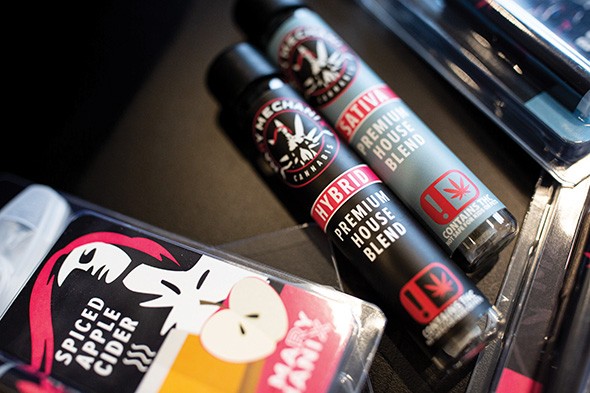 When the season changes, so does the flavor of Mary Mechanix’s seasonal cartridges.

Its spiced apple cider cartridge debuted on the autumnal equinox, the same day the company retired its popular Bomb Pop for the year.

To Mary Mechanix, having a unique brand with distinctive offerings is as important as quality products.

“We've been kind of perpetual entrepreneurs,” chief executive officer Ty Saner said. “We started with the landscape and lawn mowing company, and then we went on to roofing, on to flipping homes, then on to actual building of homes to rental property to developing, so when the marijuana business came along, we both were very versed in marijuana by the time. We knew the medicinal sides and aspects of it, and we knew we wanted to get in some sort of opportunity. We had several people that came to us that are already prominent in this industry and want us to invest in them. I just didn't see any business model, and neither did he, that we wanted to stick our money into. None of it made sense to us.”

When a construction superintendent left early for the day to tend to his grow, Chaz Saner accompanied him.

“The minute I got to the grow, I called my brother,” chief operating officer Chaz Saner said.

“They were the founders, I guess you could say, of this business because we came in when they just had 1,000 square feet and it was just hodgepodged together,” Ty Saner said. “We came in and we saw the potential of what they could be and the atmosphere that we could employ inside of this industry. We needed ability to grow, we needed to learn the processes of the business and we put it all together, and that's where Mary Mechanix now becomes something that we can put branding to. The branding came first. Just like with any good startup, I feel, branding is the most important thing of a company.”

“It leads our direction, where we're trying to go and not necessarily where we are today but where we eventually want to be,” Chaz Saner said.

Mary Mechanix began getting more growhouses online and hired an experienced processor from Washington to come in and start concentrating cannabis for its vape cartridge line. That processor came from a recommendation from the guy doing the pre-roll line. And so on.

“What Mary Mechanix is really about is it's friends wanting to help friends that then become employees because they love the cannabis industry, so it's one big family even though it's not blood,” Chaz Saner said. “But it's a community. … It's just funny how all those puzzle pieces make us who we are and how everyone here was the perfect piece for that puzzle at the right time. It's just been this natural progression of local Oklahoma City boys hanging out with their buddies, growing fire and making some fire distillate, and it's been a ton of work and a ton of headache, but it’s the most incredible industry I’ve ever been in.”

That spirit is evident in the new facility that Mary Mechanix is currently constructing in downtown Oklahoma City. While the rest of the building is still undergoing construction, a sizable restroom with a shower and a full-service kitchen are already installed. It is obvious that the company expects the operation to become a home away from home.

“We want to make sure that we can stay ahead of the curve in an innovative grow facility, making sure we're growing healthy plants that are mold-free, pest-free,” Chaz Saner said. “It's just a good, clean atmosphere that makes people want to work harder.”

The name of the brand is founder Joey Neihart’s grandmother’s name and their admiration for processors in the Pacific Northwest. The company colors, black and pink, were met with some resistance from a group of bearded men, Chaz Saner said, but it soon grew on them all. Then they developed Mary herself.

“We wanted to make sure we weren't taking people too far, and we wanted to capture everyone, not just men, not just women. We didn't want to oversexualize the woman because that wasn’t our goal. Our goal is to literally create her to be a goddess in a sort, to be the face of what we do,” Ty Saner said.

“Everybody's got a ‘Mary,’ right? They’ve got a mom that needs a little anxiety relief going to bed. They all got a grandma that has Alzheimer’s,” Chaz Saner said.

Thus the iconic image of “Mary” and the company slogan “the face of cannabis” was born.

The brand has developed four facilities in different areas of the metro that will have 20,000 square feet of canopy space by year’s end. Their products are currently in more than 250 dispensaries.

“It's been a ton of work and a ton of headache, but it’s the most incredible industry I’ve ever been in.”
—Chaz Saner tweet this

In addition to raw flower, Mary Mechanix also produces pre-rolls and will be rolling out several forms of concentrates by the end of the year, but what it has become known for is its flavorful vape cartridges made through short-path butane hash oil extraction. Bomb Pop was the first seasonal flavor.

“The McDonald's of the world does the McRib. Everybody goes crazy over the launch of the McRib,” Ty Saner said. “Starbucks’ pumpkin spice latte. You have these huge brands that do seasonal runs, and we knew that we could bring some really unique flavor profiles to the distillate world.”

The strong, distinctive flavorings of the cartridges come from botanically sourced terpenes rather than food-grade or reintroduced cannabis terpenes, Ty Saner said.

“They're botanical terpenes from terpene-extracting companies that are third-party processed,” he said. “We use solventless, botanical terpenes to achieve the flavor. We won't use any additives or any type of carrier agent in our flavors or strain-specific cartridges. They can pull terpenes from anything that has those terpenes in it. The companies we use actually use lemons for limonene, so it’s a true botanical terpene. That's the difference. They’re more expensive. I think a lot of people assume that we re-infuse the cannabis terpenes.”

Mary Mechanix originally experimented with a pumpkin flavor for autumn, but those botanical terpenes did not emulsify properly despite many attempts. Mary Mechanix will have a seasonal winter flavor but is not revealing it yet.

“Be ready for Christmastime,” Chaz Saner said. “Christmas is going to be a good one, but the Bomb Pop will be coming back on the first day of summer. So everybody be better be ready.”