“That’s the great thing about the communion of music,” she said. “Being able to share thoughts while watching others travel.” 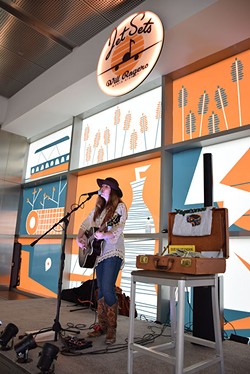 As winter travel spikes around the Christmas and New Year’s holidays, so can anxiety caused by layovers and bumped and delayed flights. To help melt away some of that stress year-round, Will Rogers World Airport recently introduced its Jet Sets live music series featuring weekly performances by Oklahoma musicians.

“One of the things we’ve noticed is traveling by air has become more stressful,” said Karen Carney, the airport’s public information and marketing manager.

The idea is borrowed from others across the U.S., like Austin-Bergstrom International Airport in Austin, Texas. Carney said Jet Sets was designed with help from feedback she received from other airports.

Another component of the event is Arts Council of Oklahoma City’s Art Moves initiative. Carney works with Art Moves director Evan Crowley to find music acts and help with scheduling.

One early contributor to the series is Susan Herndon. She mixes Americana, folk and jazz sounds with French and English lyrics. Herndon performed the inaugural Jet Sets event in late November and returns for shows Thursday and Dec. 30.

For the last 15 years, Herndon has lived the life of a full-time musician. She began performing while teaching English at a university in the French city of Aubière, near Clermont-Ferrand, and studying the French language.

Herndon’s blending of French and English is one of her songwriting trademarks. Since her beginnings as a busker, a street performer who works for gratuities, along the roads of Aubière, she wove the languages together, interlacing the beauty of their words, sometimes to explain their meaning, other times as pure poetry.

“Lyrics are a mystery to me,” she said during a recent interview with Oklahoma Gazette. “Sometimes I’m not sure where they come from. They’re truly a mystery.”

Nevertheless, she recognizes that lyrical themes run through much of her work, and they are often life events.

“Love, anti-love,” she said. “I have a lot of songs about traveling.”

Traveling is a subject she understands. Born in St. Louis but raised in Tulsa, Herndon performs approximately 200 shows a year, often in states like Texas, New Mexico and Colorado. She also has toured the West Coast and Europe. It’s by design that her latest album, Vagabonde, is a collection of French songs.

She is drawn to the idea of performing songs inspired by her travels for an audience in the midst of making its way from one place to another.

“That’s the great thing about the communion of music,” she said. “Being able to share thoughts while watching others travel.”

Herndon said the response she receives at Jet Sets gigs is positive.

“They love it,” she said. “A man from Nashville stopped by and said he liked my music, then bought a CD. It was really cool. You can’t have that type of experience every day.”

“So far, the program has been well received,” she said. “The music brings a smile to their face. They appreciate that.”