The improved Manuel Perez Park could be open by late 2019. 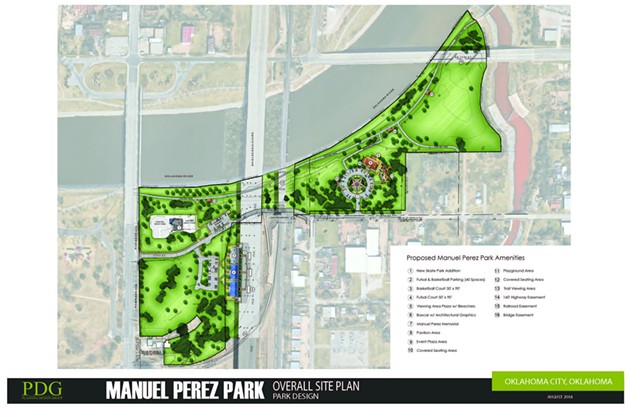 Nearly 30 acres of riverfront parkland will get more than a million dollars in upgrades and be named after a local war hero.

“The active part of the park with the futsal and basketball courts will be adjacent and connect to the skate park,” said Donna Cervantes, former executive director of Calle Dos Cinco in Historic Capitol Hill. “The veteran’s memorial part will be more of a quiet part for honoring veterans, and it will have a family pavilion and a small playground.”

The former Perez Park was located at SW 14th Street and Harvey Avenue, but officials decided to move the park in 2016. Cervantes, now an associate planner for Oklahoma City, helped make the decision.

Friends of the Manuel Perez Park Committee worked with the city to design the new park, but Cervantes said the committee and local community members were doubtful that the city would come through.

“We were amazed at the commitment that the city made to honor the wishes of the committee and really follow through with designing what the committee asked for. That’s been really rewarding,” she said. “It’s looking like they will build what they said they would, so it really is building trust in the community.”

The department has about $1.9 million available for the improvements.

“Each of the bids have to be evaluated to see if they ticked off all of the checked boxes,” said Doug Kupper, director of OKC Parks & Recreation. “We want to see what the unit prices are, what we can afford to build with the money we have and see who’s got the best value.”

After evaluating bids, the department will decide to pick one or go back to the drawing board if the bids are too expensive. But if all goes well, improvements could be completed as early as next summer.

“By the time we evaluate the bids, go to city council, get approval of a bid and the contractor gets their startup time, we may be at the end of summer or next fall before construction is done,” Kupper said.

The park will span from Robinson Avenue nearly to Central Avenue on the south side of the Oklahoma River.

The 27-acre area will incorporate and add onto Mat Hoffman Action Sports Park. The existing skate park is designed primarily for BMX bikes, so Kupper said the addition will include features for skateboards. A basketball court and two futsal courts will be added near the skate park. 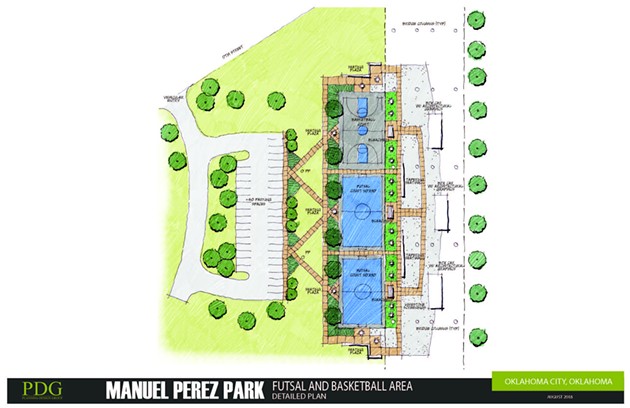 Manuel Perez Memorial will be the most difficult thing to construct, as it is an intricate, creative space, Kupper said.

It is a veteran’s memorial in the park’s cul-de-sac with small structures surrounding a blue circle with stars. An Oklahoma flag, an American flag and a Medal of Honor flag will stand over the memorial’s wall where Manuel Perez’s plaque will hang next to the words “We Remember.”
A pavilion area and playground will be added near the memorial.

“This park is really just another testament to investment and commitment to honor this neighborhood and listen to their needs,” Cervantes said. “It’s not just building a park; it’s building a community bond, so it means a lot.”

Bids for the park’s improvements are due Nov. 20. 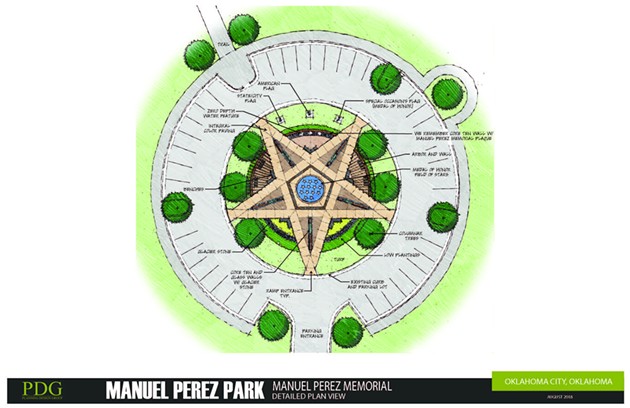