Artist Jason Cytacki provides an alternative look at everyday life and objects in his Reruns exhibit at Mainsite Contemporary Art. 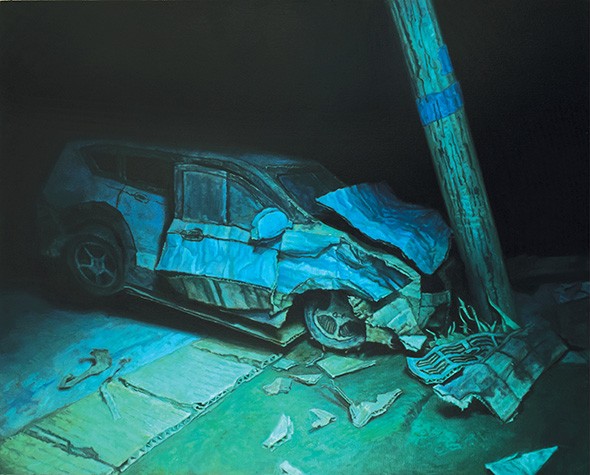 Artist Jason Cytacki has gone from painting scenes inspired by the Westerns he watched on TV as a child to drawing the TV itself.

Many of Cytacki’s works are almost photo-realistic oil paintings of miniature dioramas he has constructed from cardboard, action figures and other found objects. He said he first developed the technique out of boredom with conventional subjects while an art student at Indiana University South Bend.

“Comic books were sort of my first artistic inspiration,” Cytacki said. “I studied at a place that was very traditional in terms of learning to paint observationally from still-life figures. I got a little burned out on apples and flowers and the traditional kind of still-life figures, but I still wanted to practice that skill of observation, so instead of using photographic references, I started building little scenes with toys of mine, which is really not unlike the comic books. I would create a scene between Mr. Potato Head and some other toy I had.”

His landscape paintings of the American West emphasize the artificiality of the dioramas they depict, detailing the seams in the blankets used to recreate water or desert sand and the corrugated grooves in the cardboard trees and mountain ranges. When he moved to Oklahoma in 2012 after receiving a master of fine arts degree from University of Notre Dame, Cytacki said his closer proximity to his subject matter made it less artistically inspiring.

“When I was in Indiana, the West seemed like a really far-off place, different from where I was, and it was something that’d I’d really only seen very much in movies and a road trip or two my family took when I was younger,” Cytacki said. “It had a mythological quality in my brain still that I tried to deconstruct and play with. When I moved to Oklahoma, the imagery and iconography was a lot more pervasive, and so it just sort of wasn’t intriguing in the way I was interested in.”

Cytacki’s interest moved to science fiction scenes inspired by the comic books he read as a kid, but with his latest work in Reruns, he has chosen to recreate moments from his own childhood.

“It’s definitely somewhat of a shift from the older paintings in terms of at least the subject of what I’m depicting,” Cytacki said. “I was really wanting to pursue the idea of the places and the experiences that I’ve had up until today. The actual places that I’ve lived and experienced, everything goes into that, including what’s going on in the world today in putting such a focus on quote-unquote ‘flyover states.’”

The methodology Cytacki used to depict these childhood scenes is still the same, however, because memories, like movies and comic books, can also be constructed mythologies.

“The way we view the world as a child, the ways in which the world is shown to us or the way we perceive it, becomes part of us as not just an accurate snapshot of the world, but they’re filtered through a bunch of systems of beliefs and ideas from our own upbringing and the places we lived and the people we’ve interacted with and the shows we’ve watched,” he said.

The difference when Cytacki applies his style to more mundane scenes is the seams can be harder to spot unless one looks very carefully.

“The sense of constructed reality comes in the way I paint them with the cardboard being visible and the sculptures with the way they’re constructed so you can see how they’re built,” Cytacki said. “I feel like most people realize that the view of the American West shown in John Ford movies is somewhat exaggerated or hyped up, but I feel like with the interiors of suburban homes from childhood, it’s perhaps a little less obvious.” 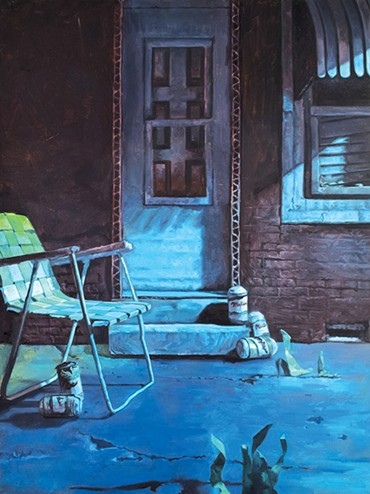 The effect Cytacki wants to achieve with his newest works is deliberately subtler.

“The American West’s mythology is an easy target, I guess, because it’s so overinflated and exaggerated,” Cytacki said. “I really wanted to show that these pieces are constructed and in some sense show that this mythology is maybe not as true as we’d like to believe. But with [Reruns], I’m trying to put less of a direct message on top of the work … to make the narrative and settings a little more ambiguous. One person might look at it and find a different conclusion or have a different experience with that painting than somebody else with different experiences might come to. … There is still some question of exactly what is occurring in these images as opposed to hitting somebody over the head with exactly what my thoughts are when I’m making them.”

In addition to oil paintings, Reruns also features sculptures Cytacki constructed in a fashion similar to his dioramas. But where his dioramas are typically small-scale and made from cardboard, which he often recuts and reuses for other dioramas, the sculptures are made from plywood two-by-fours with detailed pencil drawings adhered to the surface.

“They’re definitely in the same headspace,” Cytacki said. “Obviously when an idea is in another medium and the scale changes, the meaning also sort of shifts.”

Each sculpture is titled “Capriccio” after an Italian painting method of depicting real architecture in fantastical ways. Cytacki said he was inspired to create the sculptures while sightseeing in Rome.

“I was thinking about pieces and fragments of ruins,” Cytacki said. “They’re deconstructed also in a way because they’re found by excavators and then somebody restores them, and they’re positioned in a certain way to tell some kind of story about the people who lived there. I started thinking about some of the ideas of myself at home and the way we associate the same kind of ideas with Middle America.”

Parts can signify a whole, but because the whole is reconstructed in the mind of the beholder, the meaning might vary.

“I wanted to play with that idea with places that were significant to me in terms of my personal life but also were representative of this larger idea of Midwestern America,” Cytacki said. “Things that are specific to me, small details that give a sense of specificity, but also a lot of those popular culture items that were meaningful to me. I’m sure hundreds of other people have the experience of going to Pizza Hut on the weekends and playing ‘Zelda’ on the Nintendo.”