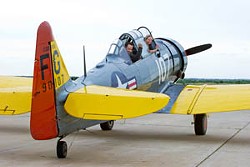 For Jason Flood, the Discover Aviation & Airshow Spectacular on Saturday is more than a chance to pilot his airplane for enthralled spectators; it’s his second chance at life. Flood is one of 15 pilots performing at noon at the Sundance Airport, 13000 N. Sara Road, in Yukon. The event will include skydiving, 15-minute helicopter rides, a flight simulator, a bounce house for kids, food vendors, booths and snow cones, said Heather Sterzick, Sundance Airport manager. The free event is open to the public. Flood is just happy to be flying, and to be alive. A crash in 2011 nearly ended his life. He piloted a Bellanca 8GCBC during one of his regular shifts flying advertising banners on Aug. 2, 2011, in Egg Harbor Township, N.J. Flood’s plane crashed due to engine error at 250 feet while trying to hook an advertising banner in the field. The majority of what Flood knows about the accident was retold to him by a police officer who found him lying unconscious among the wreckage. Flood suffered multiple injuries. He had broken ribs, he fractured his left heel and right ankle, his liver was lacerated, he lost his left kidney and spleen and he suffered a ruptured aorta. Doctors told Flood they performed a 17-pint blood transfusion at the hospital to save his life. Flood was kept in an induced coma for three weeks. Once he awoke, he attempted to figure out where he was and what had happened. “It just wasn’t a good, warm, fuzzy feeling to wake up to,” Flood said. “I never thought I’d fly again, nor did I think I’d ever walk again.” The plane crash did not deter Flood from continuing his passion for aviation. Four months later, he was back piloting a Piper J-3 Cub training airplane and flying from New Jersey to Maryland. Ten months after the crash, Flood went on to place second in the Wildwoods AcroBlast competition, an aerobatic contest in his home state of New Jersey. He relishes every opportunity to be able to pilot airplanes and perform for spectators at air shows. “I just sit up there sometimes and cry to myself when I watch the sunset and fly,” he said. Event performers include Kate Kyer, Justin Lewis, Kyle Franklin, Greg Koontz and the Alabama Boys and more. The skydiving and helicopter rides are first come, first served. Those interested in skydiving must be between 8 and 18 years of age, Sterzick said. Guests are advised to bring their own chairs, as a crowd of about 5,000 is expected. Some indoor activities will be available. For more information, visit sundanceairport.com/discover-aviation.