Wolf will perform twice over the weekend, including a new snake-charming set on Friday with her ball python named Lazarus. Wolf, who splits her time between Oklahoma City, Paris and Berlin, got what she calls “snake fever” when performing burlesque in New Orleans, where the act is popular.

“You don’t train the snake; that’s not possible,” Wolf said. “My rehearsal with him consists of mostly improv because I never know what he is going to do. It is just a matter of knowing what parts he’s comfortable resting on my body when I need to move him. Learning to move him gracefully is difficult because they’re really strong, even the smaller snakes.”

On Saturday, Wolf performs her most requested act that features giant fans and singing in a red-and-gold costume. In total, she hosts about 10 public shows per year, including the annual New Year’s Eve party at Oklahoma Contemporary Arts Center and a large number of corporate and private events.

“I’ve performed in 11 countries as a solo performer, and I’m always trying to expand,” she said. “I love to travel. I’ve done multiple productions in the U.S., and you always have comfort in your hometown, especially since I’ve been established for almost eight years. I have a good, supportive fan base here. I was recognized on the street last time I was in Berlin, and that was really exciting.” 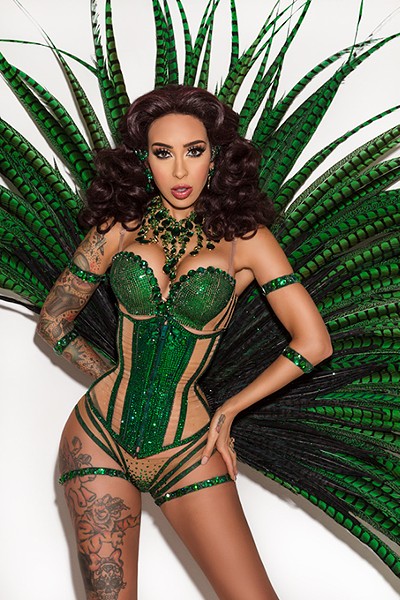 As Wolf grows her brand, she said she’s always excited to perform in the place that gave her burlesque career its start: Oklahoma City. While her quarterly shows are often built around themes for holidays like Valentine’s Day, Halloween or New Year’s Eve, Oklahoma City Burlesque Festival is designed to showcase a wide selection of themes and styles.

Wolf hand-picked Reed and Deveraux to headline the festival but opened the featured performance slots for applications. Reed was New Orleans Queen of Burlesque in 2017 and was recently cast in the Las Vegas production Absinthe.

“Her costumes are gorgeous, and she is going to be doing award-wining rockabilly roller act,” Wolf said.  “It’s very showgirl.”

Deveraux is a two-time runner-up (first runner-up in 2013 and second in 2017) at Miss Exotic World at the Burlesque Hall of Fame, which Wolf said is the most prestigious burlesque competition in the country.

She is one of several Oklahoma City Burlesque Festival performers who have runner-up finishes at Miss Exotic World. Los Angeles-based performer Jessabelle Thunder makes her Oklahoma debut after finishing first runner-up at the competition April 22.

“[Thunder will] be doing the same act that placed there and that’s exciting,” Wolf said.  “She’s one of the people that you see and her presence is just magnetic. She has an amazing stage presence and is an emotive dancer.”

Wolf takes pride in her ability to find talent, making note that half of last week’s Queen of Burlesque competitors have performed in one of her Oklahoma City productions

“We’ve had a lot of Oklahoma debuts,” she said. “We want to bring world-class burlesque and variety to Oklahoma. I’ll go to shows around the world from Moulin Rouge to Las Vegas, and those play in my mind when I put together a show. We want high production value and really polished acts on a professional level.”

The festival also includes workshops in the fields of splits, fan dance, musicality and other performance tips hosted by Deveraux, Reed, Thunder and Emma D’Lemma. Wolf said that the workshops are primarily for other performers, but they are open to the public. 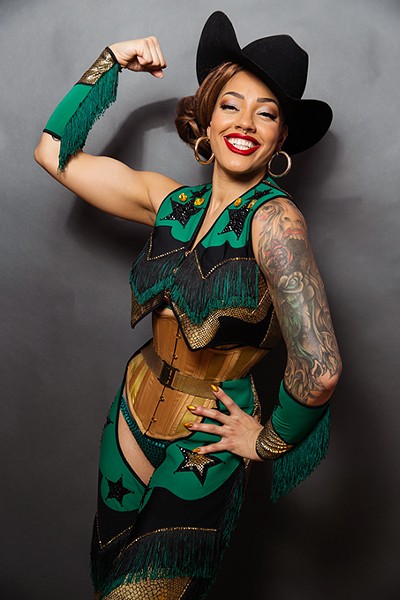 “It doesn’t matter if you’ve never tried to do the splits in your entire life,” Wolf said. “Even people that just want to learn a new skill and aren’t necessarily in performance [are welcome.]”

“I consider myself a feminist and body-positive, queer-friendly producer, so it’s important to me that audience members can see someone that represents them on stage,” Wolf said.

After performing all over the world, Wolf enjoys bringing burlesque to Oklahoma City, which only had a nascent scene when she began performing. She said about half the audience has supported her shows since the beginning.

“We get performers from around the world, and they always talk about how great the audience is. Oklahomans — whether it is sports or burlesque — if they support what you’re doing, they’re going to show up and be really enthusiastic and give great support,” she said.