Years before the Cannabis Cup came to Oklahoma, Jayson Emo left the state to pursue his cannabis dreams in Colorado. 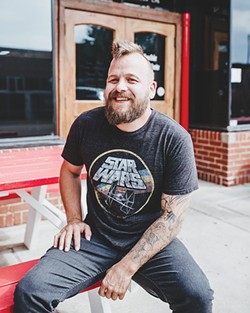 Oklahoma might be about to have its first Cannabis Cup, but the champions will not be the first Okies to win one.

Jayson “Giddy Up” Emo, 37, was born in Moore and raised by his mother.

“I started out like most Oklahomans, just kind of like wondering what the fuck I was going to be when I grew up with not many options laid before me,” Emo said. “I went to Westmoore High School. Was a half-ass student — couldn’t keep my attention on anything very long, easily distracted and even more easily bored.”

He and his brother smoked cannabis for the first time when he was 14 years old. They were drug-tested the next day.

“He failed, and I passed mine somehow,” Emo said. “We were young idiots that really had no fucking clue. So I imagine we came home stinking like pot and when we woke up to go to school the next day, my mom was like, ‘Surprise. You’re getting drug-tested.’”

That was not the last time cannabis drove a wedge between Emo and his family.

“One of my stepdads was a police officer during my teenage years, so it was a big no-no for any kind of pot,” he said. “And there for a while, I was actually made to choose between coming around my family or my pot habit. I think I made the right choice and chose my pot.”

Emo worked odd jobs but was never happy with his work. Then, 10 years ago, he was inspired by his love of cannabis to take the early steps toward a change in profession, despite the lack of cannabis culture in Oklahoma and its illegal status in the state at the time.

“We went to Colorado just to kind of check it out and see what was going on,” he said, “because the dispensaries were just starting to open. There was only, like, a handful, and the ones that were around were hidden and not marketed or anything like that. We went there from April 17 to April 19 to check it out. I came home and either sold off almost everything I had or gave it away and left to move to Colorado on April 24. I was home for like three days, and I was like, ‘Fuck this. I’m out. I don’t give a fuck if I’m homeless or if we fail, but I’m going.’ We moved to Longmont, Colorado, with the brilliant idea of growing for dispensaries. Neither one of us had any real growing experience to speak of. We were much like everybody else in Oklahoma right now. We had fucked around. We had made weed that we thought was good. There wasn’t anything really to compare it to for us. We moved to Longmont into a 9,600 square-foot house and were going to grow, and we never even got that fucking grow off the ground.”

In Colorado Springs, he and his partner opened a dispensary instead.

“I worked at that place seven days a week, open to close, and for a good chunk of the time, I lived in the back room of the dispensary,” Emo said. “I had a bed. I converted a mop sink into a shower. I was categorically all in. I was like, hell or high water, we’re gonna figure it out, like any business when you’re learning. [It was] real good until we made a couple of mistakes, and then we were done, more or less. We put ourselves in a position where our business couldn’t succeed, basically made from inexperience.”

His business partner went to California to work on his product, and Emo stayed in Colorado.

“I set out for the first time, you know, in my weed career looking for a job in the weed industry,” Emo said. “Before, I’d always been kind of doing my own stuff. Now we’re at about late 2011.”

Emo had seen another processor selling shatter for $100 a gram. He had made hash as a hobby, but he decided to start doing it seriously. After a number of tube extractions, he realized there was a better way. He teamed up with a chemist, and they devised the first prototype.

“The machine itself, the first one we ever built, was nothing more than some junk laying around. And I didn’t really like what we built,” he said.

The chemist moved to another country, and Emo redesigned the machine.

“When you’re working as a team, you make compromises,” Emo said. “And even though the guy I was working with was a chemist and had some great ideas, he was kind of set in his way. … I created a machine that was actually viable. The runs got down to two hours instead of 12 to 16.”

After a falling-out with the company he was working for, another company approached him. That was where he made his third prototype.

“It wasn’t really the machine I have today at all. It was a Frankenstein machine,” he said.

After a problem with the paperwork on the laboratory, he bought his machine back from the company and set out on his own, eventually forming EmoTek Labs with his completed and patented machine.

“I almost went through a year of building out that machine,” Emo said. “I released them for sale like the last month of 2012 and sold maybe 50 in the next six months. So, between $35,000 and $40,000 a pop. I started selling the machines, was still running the lab, was trying to get to bigger and better things. … I was everywhere. I was making so much hash. I was just in hundreds of stores. I’m doing good in the minor leagues, but moving to Denver and competing with the guys in the sales and the brands of Denver was the major leagues for us. [I] really started focusing on machine sales and perfecting my hash technique and getting better. At that point, I was getting really cocky and really competitive. And just the hunger to prove that I did make better, faster and more hash than anybody else around.”

Then, in 2013, he entered the Amsterdam Cannabis Cup.

Editor’s note: This is the first part in a series about the first Oklahoma Cannabis Cup.