This month, the chefs at Guyutes offer up a tuna tostada made with a spicy infused olive oil. 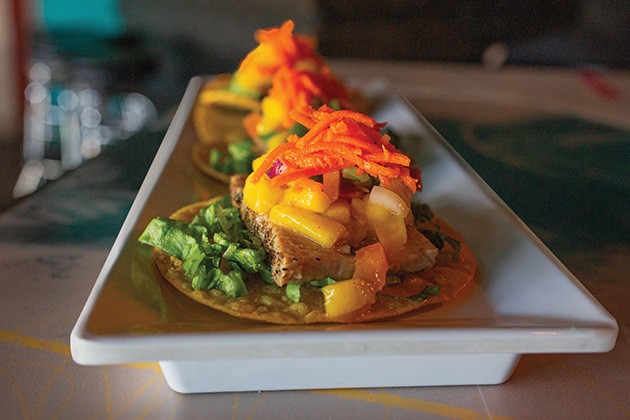 Summer temperatures have stuck along later than usual this year, and the chefs at Guyutes are offering an infused dish with about the same amount of heat.

Each month, owner Jarrod Friedel and chef Matt Pryor bring Oklahoma Gazette readers a recipe that goes beyond the traditional edible with inspired options. This time, they have whipped up a pan-seared tuna tostada topped with a mango salsa made with a cannabis and serrano pepper-infused olive oil.

“The salsa that we’re going to have is going to be mangoes, jalapeños, tomatoes, red onions, avocados, with a little bit of orange juice, cayenne pepper, garlic powder, and it’s going to be finished off with a pickled carrot that gives it kind of a tang,” Pryor said. “We wanted to go with something light, not too heavy like your traditional tostada with beans. It would also be successful with rice also because rice goes really well with the pan-seared. Kind of like you get with pan-seared tuna rolls in sushi. I wanted to bring that sweetness with tuna.”

The tostada has been about a month in the making. Friedel just decided to give it an extra twist with the infused serrano oil.

“I just got back from Mexico, and all I ate was fish, and so as soon as I came back, I went and got tuna and I’ve been making tuna tostadas the past three weeks,” Friedel said.

When mixing the salsa, Pryor advises to go lightly with the cayenne pepper.

“You don’t want to overpower the heat in the salsa. You just want to keep that sweetness going,” he said.

Once the rest of the dish is complete, they advise drizzling a little of the leftover infused oil over the top of the tostada to give it an extra punch.

The tostada was made more of a fusion dish than a typical Latin tostada preparation by the addition of Asian flavors of sesame oil and rice wine vinegar. It’s a nice and refreshing way to consume the medicinal cannabis when it’s still warm outside. There is no discernible cannabis flavor in the oil used in the salsa. I mostly tasted some heat and depth of flavor imbued by the serrano pepper, which balanced nicely with the sweetness of the mango, tomatoes and juices. I think I would add some cilantro as well for more herbaceous notes.

As a composed dish, I thought the marinated carrots tied the fusion elements together. I think it would be fun to do a peppercorn crust on the tuna by mixing black and Sichuan varieties for a balance of spicy and numbing sensations. I liked the use of the Blackberry Fire strain. According to Leafly, reviews of the strain said that it provides feelings of happiness, relaxation and uplifted mood. I ate about 30 milligrams split between one composed tostada and a few extra bites with tortilla chips and was hit with a relaxed and uplifted sensation in about 30 minutes — quick absorption — that lasted for about four hours. —Jacob Threadgill 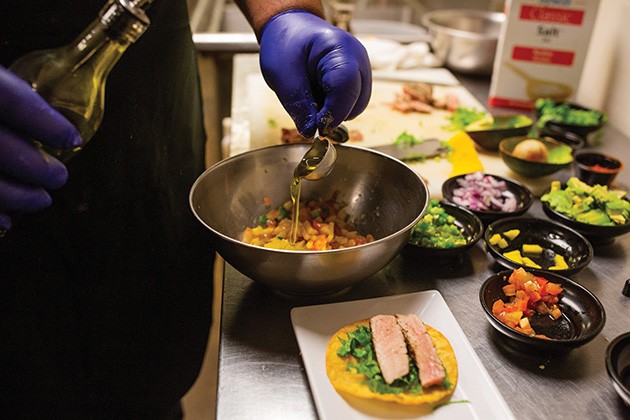