After the success of a cannabis industry boxing card in December, Oklahoma City’s boxing royalty kick things up a notch. 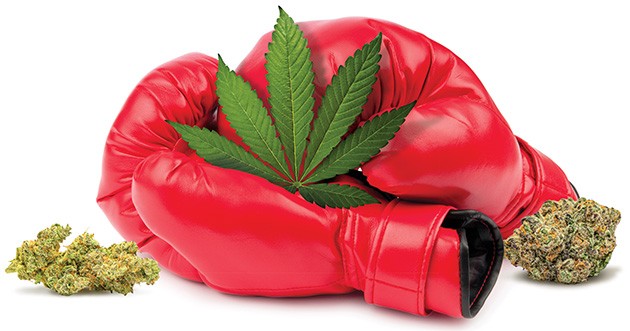 When Chase O’Grady was watching alongside hundreds during the cannabis kickboxing matches inside a tent in a front yard in Newcastle in December, he knew the concept was ready to be taken to the next level.

On Feb. 8, the first Buds and Brawls event will take place at OKC Farmers Public Market, 311 S. Klein Ave. The debut event is being dubbed the “Winter Showdown.”

“The Canna-Grudge [Showdown] was a good jump-off point for us. We realized that there was something to it. I went there as more of an audience member and a viewer,” organizer Chase O’Grady said. “Literally, the minute that I stepped foot into that tent, the whole thing changed. It was about three hours of complete entertainment that was edge-of-your-seat. It was gritty. It was fun. And the best part is that you got to consume cannabis. So I went to the two main people who were involved in that, Pam [Brown] and David [Cummings], and said, ‘Hey, I think you guys have an amazing idea here, and I want to be involved. How can I be involved?’”

They approached the owner of OKC Farmers Public Market, who O’Grady said happens to be not only a boxing fan but a cannabis enthusiast and grower.

“It’s a beautiful venue,” he said. “Actually a little cool bit of history about it: The first three events at the Farmers Market were actually boxing events, so it’s really cool that this is kind of a real-deal boxing place. The first time that it’s at a place like the Farmers Market, such a public place, and bringing this cannabis here. It’s going to be almost a historical event, seeing it out in the open like this and seeing it so at the forefront.”

The balcony will be open to medical cannabis license-holders. In addition to opening some of the upper windows, O’Grady said there will be several fans pushing the smoke toward them as well as carbon filters to help absorb some of the smoke and odor.

The balcony will also host a dab tent, and multiple smoking and vaporizing utensils will be provided for patients to try.

“So anyone who wants to try an e-nail, a Puffco, a Volcano. We’ll have a G Pen. Some of these more high-end glass pieces and some of these fun kind of devices to smoke, we’re going to have a dab tent that will make it available for people to try their own concentrates out of these devices,” O’Grady said. “It’s BYOC 100 percent. There won’t be any sale of cannabis. I have told my vendors if they want to sell CBD or any apparel or anything, that’s completely up to them, but there won’t be any THC being sold. I think we’ve done everything that we can to mind our Ps and Qs to make sure that we are playing by the rules and being as legitimate as we can. The last thing that we want to do is try to do anything that is in the gray or illegal.”

The balcony is limited to a capacity of 105 people at a time, which will be enforced by security. Alcohol will also be available for purchase.

“I’ve done over 100 fight promotions. I was in Puerto Rico until the hurricane. Coming back, I didn’t have an audience anymore. I know how to promote, but promote to who?” organizer David “Thunder Dave” Cummings said. “With that being said, the cannabis community for the most part really opened their arms to me and kind of let me spearhead this thing. … We have 12 fights. We have a local gym owner fighting for a title against a real good fighter out of Texas. That fight’s going to be amazing. I’ve got fighters driving in from Nevada, Kansas, Arkansas, Louisiana and Texas for this one. The level of fighters we have really stepped up.”

In keeping with the last cannabis boxing matches, there will be some head-to-head matches for budtenders or businesses challenging each other, but Cummings said the caliber of fights and fighters is also going to be more advanced than the last event.

“The first three events at the Farmers Market were actually boxing events, so it’s really cool that this is kind of a real-deal boxing place.”
—Chase O’Grady tweet this

“We have guy from Straiin fighting. We’ve got a guy representing Fire Leaf, which is pretty cool. 405 Buds has a couple of their budtenders fighting, I think, a budtender and a security guard. We have guys coming that are not the cannabis industry that are just high-level fighters so the crowd gets some really good fights too, not just two guys that want to go out there and punch each other out. So we’re gonna have a pretty good blend of those, but as far as last time, we’re not gonna have two 60-year-olds out there like we did last time, for example. … It was cute. I’m glad we did it, but this time, we’re just kind of kicking it up a notch,” he said. “Even the guys that are in the cannabis industry that are fighting have been training. I don’t think any of them are just sitting home, roasting bowls and hoping it comes out OK. And some of the dispensaries are sponsoring guys that are current athletes to represent them. But what they’re doing is they’re getting to know these guys, and they’re helping them with food and helping them with equipment and stuff like that, so it’s not just like, ‘Pick a guy for me.’ They’re actually involved in what these guys are doing, which I think that’s pretty awesome. That’s truly putting the communities together.”

Unlike the last event, the judges for this event will be experienced professionals. The only “celebrity” judge will be Tyler Box of Climb Collective and Overman Legal Group.

Moving forward, they will likely break the card down into two teams, one led by Cummings and the other led by former lightweight boxing champion of the world Sean O’Grady.

“I’ve been donating some of my time, personally, and Sean’s donating some of his time, and what we’re gonna do in the future ones — we haven’t started on this one because of the timeline — there’ll be Team Sean against Team Thunder,” Cummings said. “So I’ll actually have one side of the card that I’m responsible for, and they’re welcome to come to all of my classes and seminars. The other side of the card he’ll be responsible for. So when we get this next show, that concept’s gonna be really amazing.”

Chase O’Grady and Cummings said they anticipate Buds and Brawls becoming a seasonal event as well, with showdowns in the spring, summer and fall moving forward.

“We’ve never had this much support, so with that being said, I see this being something that we do three or four times a year,” Cummings said.