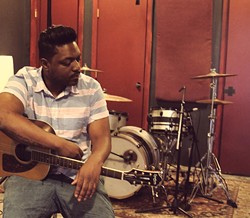 Johnny Polygon is not so busy he cannot do voice-overs for a friend’s project for National Geographic. It is true that he basically lives in his tour bus, but he had the opportunity to help out a friend and fulfill some personal goals. In the videos, a few of which are available online, he does the voices for many of the animated birds in 50 Birds, 50 States, a children’s program that uses birds to teach young people about the states of the U.S.

The Tulsa native and hip-hop artist said he has always wanted to work with National Geographic and wanted to do a cartoon.

“It kills two birds with one stone,” he said with a laugh.

The joke was just too easy, and Polygon is known for his ready laugh and quick humor. Born John Armour in Cleveland, Ohio, Polygon moved with his family to Tulsa when he was about 7 years old. He considers Oklahoma home.

“I hit puberty and lost my virginity in Oklahoma,” he said, a trace of a smile in his tone. “All my firsts were in Oklahoma.”

The list includes the first time he got kicked out of school.

“I got kicked out of every high school I attended,” he said. “I never went back. I’m a horrible example for children.”

His laugh punctuates the declaration yet again.

Polygon’s brand of hip-hop is impossible to categorize, but his humor runs throughout, sometimes subtle and sometimes overt. He begins “Whoa Is Me,” a track from his last album, The Nothing, with the line “Warning, this is a love song. Sort of.” What follows is a straight R&B groove, not traditional hip-hop. He is constantly blending genres, instruments, beats and layers of sound to create the musical equivalent of an ensemble piece.

His humor aside, Polygon’s persona in his videos can be far darker and more challenging than his affable demeanor in interviews and on stage. On “The Fall,” a track from his upcoming album I Love You, Goodnight, Polygon plays cultural prophet: “Worst thing to happen to your love life was the Internet … drown your phone, read a book or get a pet …” The lines are delivered over a black-and-white clip of a monkey swatting at a parrot. The imagery is funny, but Polygon will cover sex, death and drugs rather matter-of-factly in the same song.

Underneath Polygon’s delivery and the percussion on “The Fall” is a haunting, minimalist keyboard composition played by Gunar Underwood, a young man Polygon has never met face-to-face. That does not trouble him at all.

“He has been sending me music for a couple years,” Polygon said. “This time, the music really connected with my songwriting. That’s the way albums are for me, music really. Sometimes a musician or a producer is just on the same wavelength with me.”

Polygon will be in Oklahoma City on Saturday as part of his Epic as Fuck tour, and opening for him will be another one of those serendipitous pairings that emerged from being on the same wavelength. Alex Wiley is a Chicago artist Polygon met while setting up for a show there.

“I was doing soundcheck, and I never do soundcheck with songs I perform live,” he said. “I saw this kid by the stage rapping all the words to the songs I was using for soundcheck.”

That a fan knew the words to Polygon’s deep catalog cuts impressed him enough that he met the young man. It was Wiley, of course, and the two have kept in touch. This will be their first tour together. The pair are playing nine cities, and Polygon refers to it as a pre-run for the upcoming Aug. 4 release of I Love You, Goodnight, a chance to test out the new material live.

Because he stays busy, he is never far from the fans, both literally and figuratively. He tours often and is a frequent user of social media, a vehicle that brings his supporters even closer.

“We are at a time in music and entertainment where an artist doesn’t need millions of fans to let him know that people care about what he is doing,” Polygon said. “Social media shortens the distance between fans and artists, so you can meet them online easily, even interact with them.”

Polygon goes a step further than most artists, though. He has started doing Bed & Breakfast shows. The first was in Dallas, and the latest was in Las Vegas. Eight fans buy tickets on a first-come first-serve basis to spend the night with Polygon at a hotel. He does a show just for them, and they have breakfast together the next morning. It’s a bold step for an artist, but Polygon sees himself as a conduit as much as an artist.

“I think all music is already existing somewhere in the universe,” he said. “I barely take responsibility for the music I make. I’m like a vehicle for the people who can’t find it as easily as I can. If you take an apple from a tree and it’s delicious, you don’t praise the apple. The tree did it. I guess I’m just pulling things from the tree.”

The tour with Wiley will be Polygon’s second show in Oklahoma this year. He performed at Norman Music Festival in April, a show he called “one of the highlights of his career.”

“It was the main stage at a good time slot,” he said. “It was good to be back in Oklahoma, good to be on that stage.”

He is back in Oklahoma more since his father died last year. He likes to do shows when he’s in the state, but that’s not all he is here to do.

“Since my father died, my mom has all kinds of chores for me to do, even from a distance,” he said, “so I pass through more often.”

There’s more work to keep him busy, but he tells the story with a laugh.