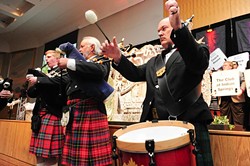 The restaurant industry is one of the toughest, most thankless jobs with long hours, painful shoes and, sometimes, unhappy customers.

Luckily, through the work of Wayne Hirst and a few of his friends, one night a year, at the Hirst Hospitality Awards, those intrepid employees get their just deserts.

“The way I hear it, [the event] was dreamed up by a few friends over glasses of wine in Napa Valley,” said Patti Colley, who has been with the Oklahoma Restaurant Association (ORA) for nearly 20 years and is now the director of programs and events.

Organizers said the event, now in its 16th year, will host nearly 500 guests. 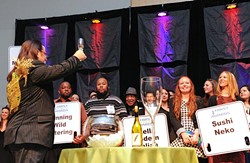 The ORA puts on several events through the year, including the Hirst Hospitality Awards, Odyssey de Culinaire, Culinary Cook-Off, Thirst for a Cause and others. Most help raise money to educate and train people who want careers in the hospitality industry.

“Of all the vintners in each state that we have had, they always mention that they have never seen anything like this dinner in any other state they have ever visited. I think it makes Mr. Hirst’s legacy that much more special,” Colley said.

Hirst is a man of passion about food, wine and the service industry, and although he has retired from the helm, the event is Hirst’s legacy of his generosity of spirit and his love of the hospitality industry and those who work in it.

“The purpose of the [Hirst] event remains twofold. The primary purpose is to honor outstanding employees from anyone in the hospitality industry,” Colley said. “The second is to raise funds for the Oklahoma Hospitality Foundation, which provides thousands of dollars of scholarships to hospitality and culinary schools across the state.”

The event is one of pomp and circumstance, starting with a parade of the honorees into the dining room, where they are treated to a four-course meal with wine pairings. This year’s dinner is prepared by the chefs of A Good Egg Dining Group.

“Then, the fun part. We immediately start giving out prizes,” Colley said.

Cash prizes total $3,000, and two-thirds of that will be “doled out” through the event in $100 increments, and the last grand is awarded in a souvenir wine bottle. It definitely keeps people staying until the end.”

There is no vetting process: The criteria for choosing honorees — which run the gamut from dishwashers to concierges — is up to the employer’s discretion, who they feel are the best.

The event has at least one guest vintner each year. This year, Rich Frank, owner of Frank Family Vineyards in Napa Valley, will oversee the libations. The former Disney executive founded the wine company around 1992, and his selections now include popular Rutherford Reserve and Napa Valley Sangiovese.