The proof of Capitol Hill’s deep history are marked by Yale Theater, Knob Hill and the Katz Drug Store building.

Calle Dos Cinco business improvement district in Historic Capitol Hill is historic for myriad reasons. In 1887, B.R. Harrington traveled through the district located just south of downtown from Wichita, Kansas, while working as a correspondent for the Wichita Beacon, the area’s first daily newspaper. Harrington observed the potential of the land that now runs down SW 25th Street between Robinson and Walker avenues and bought it during the 1889 Land Run. He named it Capitol Hill to honor its promising possibility.

The proof of Capitol Hill’s deep history are marked by Yale Theater, Knob Hill and the Katz Drug Store building.

“I’d think you’d have to go to Guthrie to see some of our architecture,” said Donna Cervantes, Calle Dos Cinco executive director.

“These places with history have value,” Cervantes said.

Knob Hill, also known as Rodeo Opry, has new owners. The tax credit they become eligible for if the building is included on the register is important, Cervantes said.

“We would like to see them reopen as a theater,” she said.

While the Opry held live entertainment, Yale Theater is one of the oldest movie theaters in the state. 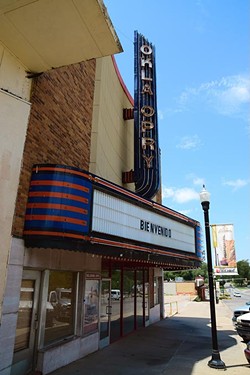 In addition to the area’s unique history, its strong cultural influence also sets it apart. Calle Dos Cinco in Historic Capitol Hill has been the district’s designation since 2013. Cervantes said its former name, Capitol Hill Main Street, did not accurately describe the heritage of the area.

Southwest Oklahoma City has long been home to a large Hispanic community, and some of the city’s most authentic Mexican food is found within it. That includes Capitol Hill.

Cervantes explained the benefits of preserving and promoting the district’s vibrant culture.

“[It’s important to know] who’s in your neighborhood and who are you serving,” she said. “The census will tell you maybe 55 percent of the population are Hispanic.”

Because some people might be unfamiliar with the area and its historic buildings, Cervantes said many haven’t explored it. She said the area is safe, family-friendly and fun.

Calle Dos Cinco is thriving due in large part to its rich history and culture. Additionally, businesses and partnerships put the district’s money to smart use.

Lemuel Bardeguez, Oklahoma City Community College (OCCC) vice president of Community and Workforce Development, explained how the school’s deep community roots make it a natural fit for its Capitol Hill Center, which will relocate to the renovated Katz Drugstore building. It had operated out of Capitol Hill United Methodist Church for three years.

“So whenever we had the opportunity to purchase and recondition this new building that’s in Capitol Hill proper, because we had been leasing, it seemed like a great opportunity,” he said.

Bardeguez also said OCCC has long provided “anything from basic computer skill sets to work readiness programs and English as a second language elements” to the Hispanic community.

Cervantes described the branch that will be incorporating many of the 1940s elements and feel of the original building as “a huge investment in the community.” Bardeguez said no additional revenue stream is expected for OCCC.

Cervantes talked about how it’s important for the district “to preserve our history.” Capitol Hill Library, part of the Metropolitan Library System, is renovating and expanding the branch that originally opened in 1951. In the meantime, it’s using a temporary location around the corner until construction that “will take at least two years” is complete, explained marketing director Kim Terry.

Now involved in the Cultural District Development Initiative, the district is open to receive funding and advice from the council for further economic development. Cervantes described the grant approval as new and exciting.

“It’s another assistance in our goal to promote the culture and the history and use arts in the form of dance, music and visual to achieve this,” she said.

Editor's note: The online version of this story corrected a groundbreaking date in a photo caption.