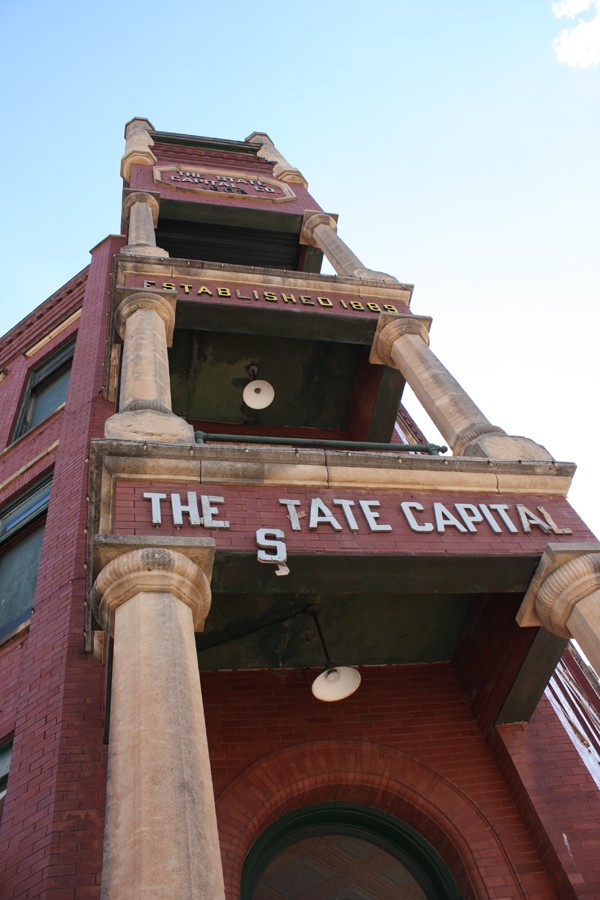 A longtime resident of Guthrie and former curator of State Capital Publishing Museum, Lentz recalls when city leaders came together in 1974 to purchase the property and convert it into a museum. During the venue’s heyday, staff and volunteers preserved the legacy of The State Capital newspaper published by Frank Greer, offering visitors a glimpse at a working vintage press and collection of printing equipment.

No longer do visitors admire the typesetting machines and the vintage cash register or read headlines from protected copies of newspapers published during the early days of statehood. After the boiler broke in 2012, the museum’s doors were locked. Limited state funding kept those doors from opening to the public again.

“You know what’s disheartening?” Lentz asked while driving past the former Guthrie museum. “See those letters. They were handcrafted and painted individually. I put them up there.”

Just above the former newspaper’s main entrance, wooden letters say The State Capital. Cracked and covered in peeling paint, the “S” has fallen below the rest, barely hanging on.

The future of the State Capital Publishing Company building is uncertain once again.

It was declared a surplus state property, and the Office of Management and Enterprise Services (OMES) called for proposals to purchase or lease and redevelop the historic structure. In February, OMES selected Bywater Development Group and WRGM Ventures to redevelop it. The St. Louis-based development company beat three other proposals, including two submitted by Guthrie-based organizations.

Bywater proposed converting the museum into 32 affordable apartments for senior residents. It committed to create a “micro-museum” to preserve printing artifacts on the site’s first floor.

Negotiations were contingent upon Bywater securing a special use permit. The City of Guthrie requires the permit for constructing apartments with more than 12 units in its historical downtown. During a June meeting, Guthrie City Council denied the permit in a vote of 6-1.

Bywater, who had requested the vote be tabled, can’t re-apply, explained Guthrie city manager Bruce Johnson. Based on recent legislation, city leaders believe Oklahoma Historical Society, the property owner, controls the next step. In 1975, after the Guthrie community raised funds to purchase the structure, the deed transferred from the Guthrie Chamber of Commerce to Oklahoma Historical Society for $10.

This year, state lawmakers overwhelmingly approved Senate Bill 1573, which allows Oklahoma Historical Society to transfer ownership of historic properties back to the original donor at fair market value. The original donor must be offered the property first. If the donor can’t be identified, the property can be offered to an “appropriate not-for-profit” organization or a federally recognized Indian tribe at fair market value.

Guthrie leaders are eager to hear what’s next and what, if any, action is needed to move the process from OMES to the historical society. According to the new law, the historical society would first offer the site to the community, specifically the Guthrie Chamber of Commerce. Interest is brewing in the Logan County community of 10,000 people.

“A discussion would take place between our council and community leaders to see if there is a plan that would be viable for the city or for a local nonprofit to utilize that facility,” Johnson said.

The uncertain fate of the State Capital Publishing Company building offers hope that the site will once again be a dedicated keeper of history.

Logan County Historical Society submitted a proposal to OMES a year ago to revitalize the museum and open it to visitors. Lentz, who particpated in the effort, believes the venue would complement the handful of museums dotting Guthrie, such as the Oklahoma Frontier Drugstore Museum & Apothecary Garden and the Territorial Capital Sports Museum.

Save Our District, a nonprofit foundation formerly known as Save Our Depot Foundation, is interested in taking over the property and prepping it to reopen, said Lentz, a member of the group. The organization is known for its successful efforts to save Guthrie’s historic Rock Island Depot from demolition.

“The museum is so important to us, our downtown and the history of Guthrie,” Lentz said. “There are two things we are asking. No. 1, the museum must be returned to a community nonprofit. We want to operate it as a museum. No. 2, we want the Oklahoma Historical Society to return any equipment and artifacts taken out.”

Print headline: What’s next?, The future of the State Capital Publishing building hangs in the balance.