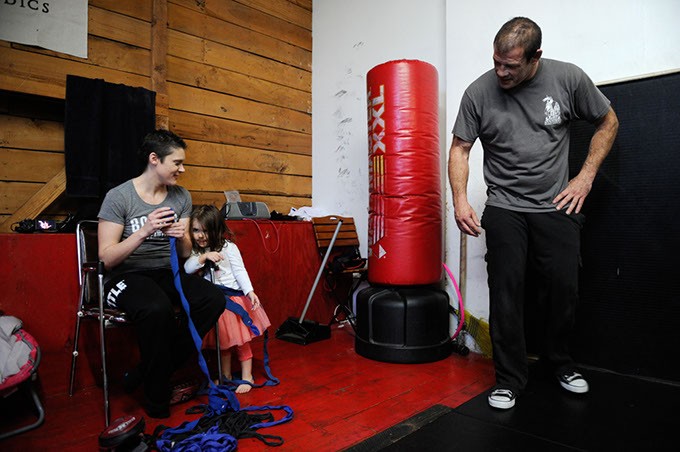 Breathing. It’s the first and last thing any of us will ever do. So why was it so hard for Travis Hoffman to remember?

Probably because he was born to fight. The wrestler turned cage fighter turned well-past-his-prime professional boxer has given everything he has to the martial arts — in more ways than one.

He married a professional fighter. His livelihood is based on teaching others how to fight. Along with his wife, Rebecca, Hoffman runs Western Avenue Boxing Gym, 4416 N. Western Ave., which teaches a variety of fighting styles to people of all different skill sets seven days a week.

He has lost a lot, too. Not just boxing matches, but there were plenty of those. As he pulled out a row of fake teeth, Hoffman said what he had mostly lost was his health. A traumatic brain injury forced him to retire from boxing forever.

It was a sport he’d built his whole life around. Now just one punch could kill him.

“It’s kind of all I was for a really long time: boxer, boxer, boxer,” Hoffman said. “That was taken away from me.”

Hoffman was used to taking hits, but this news was a different kind of blow. He was afraid. He needed to find his inner calm. He needed to breathe again.

That’s when he began getting into Systema. He first heard about the Russian martial art at a health fair several years ago, and it intrigued him enough to eventually become a certified instructor. The Western Avenue gym officially began offering Systema classes last year.

Systema dates back to the 10th century and is less a set of particular moves and techniques than it is a way of not only approaching combat but life itself. The Soviet Union suppressed many of its national traditions, including Systema. After the fall of communism, the style began steadily making its comeback in Russia and, now, internationally.

Blake LeBlanc’s path to Systema was very different from Hoffman’s. LeBlanc was not a professional fighter and has no desire to be. He was introduced to Systema in 2010 after a friend showed him a video demonstration by Vladimir Vasiliev, one of the premier figures in the martial art today. LeBlanc began incorporating some Systema elements into his regular workout routine. Later, he attended a seminar held by Vasiliev and said he was “blown away.”

LeBlanc and Hoffman now both teach Systema classes at the Western Avenue gym once a week. They are the only certified Systema instructors in the state.

“That’s one thing about this gym,” Hoffman said. “Anything we use, we like to have the best people in it. Blake was the best in Oklahoma, so I got him here as quick as I could.”

For an unwitting assailant, attempting to grapple with LeBlanc is a bit like trying to grab a wet bar of soap. Whereas many fighters will square up and get tense, LeBlanc moves with the attacker, using his momentum against him. His movements are free-flowing, smooth and, above all else, calm.

Through proper breathing techniques, LeBlanc said Systema fighters learn how to preserve their calm even in the face of perceived danger. Anyone who has studied hard for a stressful test only to forget everything when test time actually comes knows how important it can be to remain calm.

“That’s one thing about Systema; it’s pretty much exploring your fears and dealing with them,” LeBlanc said.

Some martial arts styles, he said, add things on to you, like styles, equipment and, ultimately, some stress. Systema is about removing those things and learning who you are at your core.

“Systema says instead of building technique after technique and then learning to relax and move effectively, let’s just start there,” LeBlanc said.

While much of the talk surrounding Systema is about peace and calm, it’s a style that can be deadly efficient as well. A tense boxing jab from Hoffman is effective, but it doesn’t send shockwaves through the target’s body like a more relaxed hit from LeBlanc. While a boxer might put his fists up and all but announce to you that he’s about to strike, a Systema fighter’s attacks are sneakier and don’t give the opponent fair warning.

LeBlanc said the great thing about Systema is that it can be picked up by anyone, even non-fighters like him — everyone uses Systema for their own ends, and that’s perfectly fine. 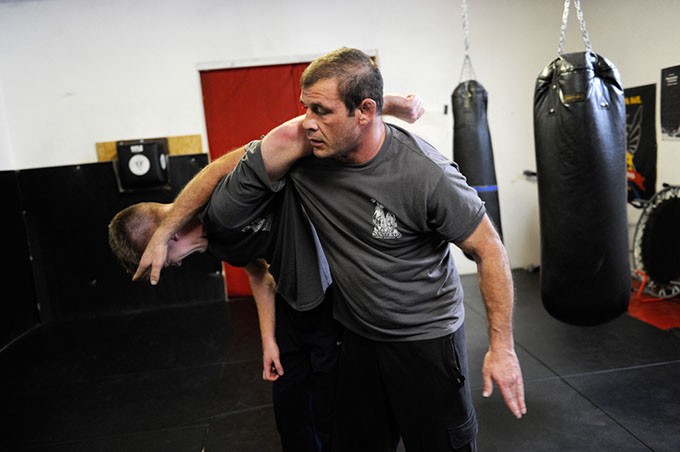 Adapting to Systema has not come easy for Hoffman. He first got interested in boxing because it was the toughest sport to learn. He restarted his professional fighting career at 37 after a 10-year hiatus. During his last professional fight at age 42, his opponent was less than half his age.

That’s a lot of tension he has built up through the years, and there is a lot of unlearning to do.

Hoffman said through Systema, he has found peace inside that he had been missing since his brain injury forced his retirement from boxing. “I’ve been in this no-man’s-land of where I’m going to go, and Systema’s really guided me a lot and helped me with that,” he said.

When he boxed, Hoffman took loud, harsh breaths just so he could hear himself and remember to keep breathing. When boxing was over, he no longer had that reminder. Systema filled the void.

“I built my whole life around boxing,” he said. “I’ve got a boxing gym, everything. Systema really picked me up and dusted me off, and I was able to just take a deep breath, so to speak.”

Hoffman teaches his Systema class at 10 a.m. on Saturdays, and LeBlanc teaches his at 5 p.m. on Sundays. Call 532-3204 or visit westernavenueboxinggym.com.