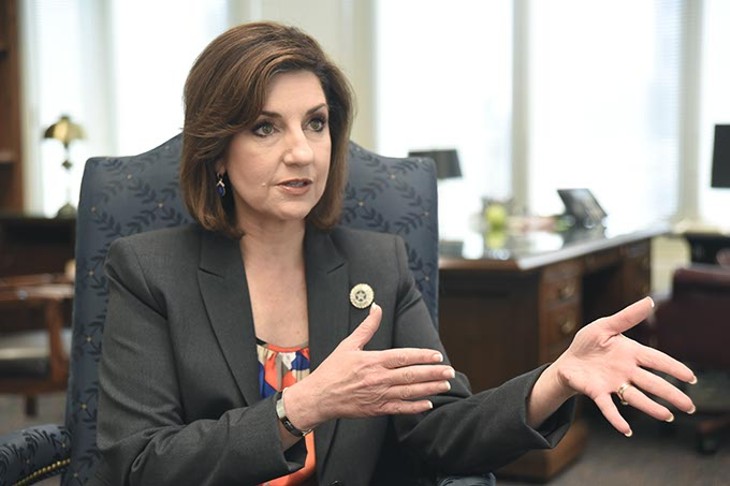 State Superintendent Joy Hofmeister sees a need for drastic change in Oklahoma’s education system. But her ability to bring any substantial level of reform rests on whether the state Legislature agrees.

“That’s an interesting question,” Hofmeister, who was elected in November, told Oklahoma Gazette when asked how her Election Day mandate has been received by lawmakers at the state capitol. “I have to think about how I want to answer that, and maybe not as honestly as I may want to.”

During a time when the state suffers from a teacher shortage and the third lowest teacher salary in America and has not seen hundreds of millions in cuts from several years ago fully restored, schools in Oklahoma are in a tough situation that many see as only getting tougher.

“They ignored your demand for change,” Rep. Scott Inman, D-Del City, told a crowd of teachers at a capitol rally last month, blaming the Republican majority for the lack of improvement on the education front.

Hofmeister, a Republican, isn’t ready to say the Legislature is ignoring teachers. But since her arrival nearly three months ago, she said she has found a statehouse that is not always quick to respond.

“I think we’re definitely in a transition that is going to naturally take some time,” Hofmeister said.

Patience might be hard to ask of underpaid teachers and parents who consistently see the state ranked in the bottom half on multiple education benchmarks, but Hofmeister says help is on the way.

She has introduced a plan to raise teacher salaries by $5,000 and wants to increase the school year and do away with end-of-the-year tests not required by the federal government. Those ideas earn big applause at a teacher rally but lack the same kind of enthusiasm from a Legislature facing a $600 million budget hole and funding increase requests from other diminished agencies, such as transportation and corrections.

“I think the teacher crisis is something everyone wants to solve, including our governor,” Hofmeister said, noting that 500 emergency teacher certifications were issued this school year, a fivefold increase from 2012. “That means we found [500 people] and put them in a classroom without taking the time to test that teacher. That is extraordinary, and it’s got to change.”

But while Hofmeister pushes budget requests and other policy proposals, she said her job includes taking on a posture of listening and respect toward educators, something her predecessor, Janet Barresi, was often accused of lacking.

“I’m trying to shift the focus away from a hammer and more to a flashlight when it comes to teacher accountability,” Hofmeister said. “Our teachers have been demoralized, and it’s more than [low] pay. Increasing pay is what is going to send the signal and message to our teachers who are leaving, but there are other things we need to do.”

Hofmeister supporters say the cultural change at the state department of education is what has to come before the policy changes, which they hope will be quick to follow.

“I definitely think there is a whole new atmosphere at the state department of education than there was three months ago,” said Meredith Exline, a Hofmeister supporter and newly elected member of the Edmond school board. “I think she has reached out to all [education] advocacy concerns and is really trying to hear what they have to say.”

In an interview with Oklahoma Gazette three months before her departure from office, Barresi, who lost to Hofmeister in the Republican primary, blamed the education establishment for turning teachers against her. She also said her removal from office would cost the state the type of tough talk it needs on education.

In her short time in office, Hofmeister has appeared to use a softened approach when compared to Barresi. But she has already had her battles, including with the state school board, which accused Hofmeister of over-controlling meetings.

“We’re getting zero communication out of this department,” state school board member Amy Ford told Tulsa World last month following a heated meeting. “I expected a level of respect to our commitment. There is no respect here.”

Last week, Hofmeister announced the hiring of her chief of staff and chief operating officer, completing the formation of her cabinet.

“We really haven’t had a chance to be operating at full speed until this point [with the new hires],” Hofmeister said. “That’s what I attribute some of the bumps in the road to.”

Hofmeister has discovered there are many bumps in Oklahoma state government, particularly on the education road.

“I don’t have any picture other than the one I am focusing on, which is students,” said Hofmeister, promoting a students-first stance that has been publically adopted by nearly every other person to hold her post. “It’s one thing to say these things, but you have to show it in your tone and the way you listen to teachers, parents and students. We have a long ways to go, but I think we are building a foundation to bring the change we want to see.”