Hold on tight, because Guernsey Park takes your taste buds for a wildly delicious ride 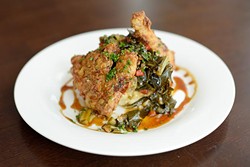 There is nothing more disheartening for a food lover to hear from a server than, “Everything is good.” Well, “Nothing is good,” is probably worse, but not by much. Wait staff have multifaceted jobs that go well beyond just taking orders and bringing food to the table. They are guides through the dense menu jungle, cutting away disappointing dishes with their machete/ball-point click pen.

When you ask a guide which way to go, you don’t want to hear, “Whichever way is fine. They’re all great.”

That’s why I love the servers at Guernsey Park, 2418 N. Guernsey Ave. — they have actual opinions about the food because they eat it all the time. If the wait staff at a restaurant don’t eat at that restaurant, you shouldn’t either.

At Guernsey, my guides directed me immediately to one of the restaurant’s best-loved appetizers, chicken lollipops (seven for $8). If you love hot wings but don’t love the heat, chicken lollipops will treat you right. The wings are cut and pushed up the bone, putting the meat at one end and the handle at the other. They are dipped and fried to create a light, airy crust that greedily sops up the balsamic chili gastrique.

Another way the restaurant serves chicken is in five-spice fried chicken ($10), which is cooked once before being fried to create an exceedingly tender texture after diners crunch through the skin. The spice lingers on the tongue even as the chicken begins falling apart. It’s as if the crispy coating is the only thing holding the meat on the bone. It’s served with sides of whipped mashed potatoes and cooked greens.

It’s an Asian take on a traditional Sunday dinner classic, and I highly suggest you try it.

Fried Brussels sprouts ($7) are becoming a fixture on many metro menus, but I’m quite fond of Guernsey’s rendition. Covered in a garlic caramel sauce that boosts the natural sweetness of the fried sprouts, the dish comes with a seared lemon that I heartily recommend squeezing over the top. The balance of the tart citrus and the sweet, tangy caramel creates a swirl of flavors that had me dizzily reaching for more.

The restaurant has always had a nice sushi menu but recently added a fun, lunch-friendly twist on the Japanese delicacy with its Sushi-Ritos. The mashup of sushi and burrito is all about making raw fish and rice more portable and more filling. 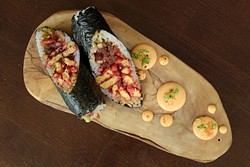 Rather than a tortilla, the Flaming Tuna Sushi-Rito ($12) is wrapped in seaweed. It is cut once, so instead of several slices of sushi roll, diners are left with two perfectly handheld portions. Along with spicy tuna, rice and pickled onions and jalapeños, the double-thick sushi roll includes a somewhat unconventional ingredient: Flaming Hot Cheetos.

Executive Chef Paul Langer laughed about the chips’ inclusion, saying it’s odd, but it added the perfect flavor and texture to the dish. He’s not wrong. The chilled tuna has a luscious, fatty texture, and the pickled vegetables and Cheetos add a great crunch. The rice adds a nice heft, and the seaweed has just the right amount of tension to make each bite snap.

There’s a spicy, creamy sauce on the side for dipping, but I prefer the classic mix of soy sauce and wasabi to bring a little added saltiness and heat to the dish.

Do you like ribs? If your answer is not yes, you haven’t had Guernsey’s award-winning Park Ribs ($12), which took home the crown at Chocolate Decadence a few years ago. Langer’s saucy pork ribs possess a gorgeous, meaty texture that holds to the bone until the second you gently tug it away. The fat and collagen melt over the long cook time, giving the meat a sumptuous feel that matches the sweet, citrusy tang of the sauce.

The restaurant is changing one excellent dish, its ssämjang burger ($10), but I’m confident the kitchen staff will hold onto what makes it so magical.

Ssäm is a Korean dish of leafy vegetables, like lettuce, wrapped around some kind of filling. Ssämjang is the thick, spicy sauce that goes with those lettuce wraps. It’s sweet, salty and spicy — kind of barbecue sauce, but with an added kick of meaty umami flavor. That’s what makes the ssämjang burger such a wonder. The sauce infuses the beef patty with even more beefy flavor, which creates an irresistible taste for burger lovers.

Langer said he’s switching it up a little bit, changing out the large beef patty for two thinner beef patties. But the ssämjang will stay, meaning you’ll still be getting a juicy burger, but with a little more surface area for flavor development. I loved it as is, but I’m excited to try the new version, too.

This is another instance in which having an enthusiastic server makes a huge difference. I was waffling on getting the burger until the waiter told me, essentially, “Dude, this is one of the best burgers around.”

Dude, he wasn’t lying. And that is one way a great server provides such great service. If he just said, “Everything is good,” I wouldn’t have gotten it.

Needless to say, when that same server said, “You’ve really got to try our brunch,” I made reservations without hesitation. In addition to the wonderful selection of brunch mimosas, I discovered a few outstanding dishes.

I love grits and I love shrimp and, goodness gracious, do I love Guernsey’s shrimp and grits ($12). The grits are made with broken rice, which soaks up the cooking liquid and creates a creamier product than unbroken rice. The shrimp, rice grits and a savory brown sauce come with a pair of poached eggs, making it a truly wonderful breakfast.

I was also quite taken with the short rib Benedict ($12). The beef was lusciously tender, and the usual English muffin was replaced by a fried steamed bun. Yes, a steamed bun that was then fried. The texture was heavenly, with a gentle sweetness that was even better when enrobed in egg yolk.

For the table, I recommend okonamiyaki ($9), which is a savory Japanese pancake filled with bacon and green onion and topped with red cabbage and a gorgeous fried egg. Spread the egg yolk around and let everyone slice up the pancake to share.

Guernsey Park is a wonderful restaurant, though a bit hidden from view. That can be the only explanation I will accept for seeing an empty table in the dining room. The food is expertly done, and the wait staff is ready to guide you through the menu. Just ask. 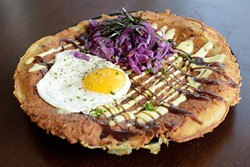 Print Headline: Amusement Park; Hold on tight, because Guernsey Park will take your taste buds for a wildly delicious ride.

What works: Ssämjang burger is a meaty masterpiece. What needs work: The five-spice fried chicken was almost too tender to stay in one piece. Tip: Make plans for a designated driver if you get mimosas at brunch.