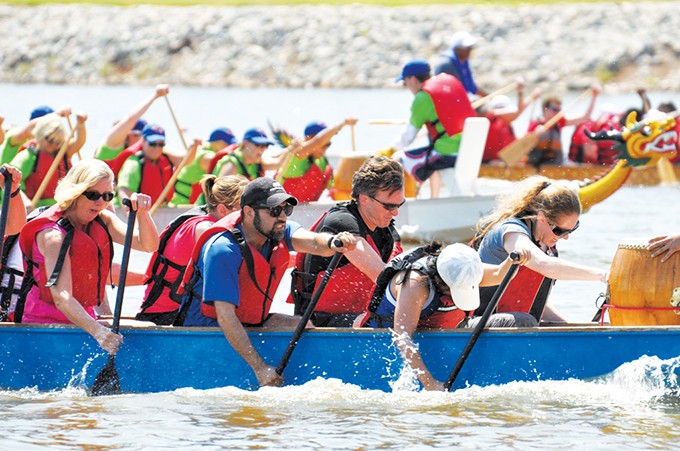 The event starts 8 a.m. Saturday and is a celebration of the United States and its democracy as well as the Oklahoma River, the Boathouse District and Riversport.

“This has become a real signature event for us in the summertime,” said Mike Knopp, Oklahoma City Boathouse Foundation executive director. “It’s all geared toward the community.”

However, the Riversport community spans the entire United States and 13 other countries, Knopp said, as the attraction draws visitors from across the globe.

“We’re unique in the world in the combination of things we have to offer,” Knopp said.

Stars & Stripes is chock-full of activities for those ready to take on the rapids, race a dragon boat or just go for a leisurely float while basking in the spectacle of fireworks. The event is free to attend, but adventures and attractions have costs associated with them.

Saturday morning, Stars & Stripes gets off to a running start at 8 a.m. with Riversport Challenge, a combined kayak and 5K competition. Knopp emphasized that most of the events of the day require no experience. Experts will be on hand to guide visitors through the adventures.

Among those thousands will be Judy Moon, a member of the Dragon Flies dragon boat team. Moon is 75 and said the average age of her team is 71.

“We love to dragon boat because it gives us an opportunity we’ve never had before. Most of us have never paddled a boat before,” Moon said.

After a friend took her to Riversport for the first time to watch the races, Moon became hooked. She gathered her girlfriends from her water aerobics class and formed a team.

“We love the fact that you can drive down there and, within 30 minutes, be on the water and kind of in a different world,” she said. “The whole area looks different when you’re in a boat on the river.”

Whether your team’s average age is 71 or 12, Moon said the key to dragon boating and any group watersport is teamwork.

“In order for them to make that boat move, they have to paddle together, and that’s just a good thing for everybody to learn,” she said.

This will be the Dragon Flies’ third year to race. They’ll be easy to spot, dressed in red from head to toe, including red visors. Spectators can cheer them on during the Dragon Boat League Championships at 4 p.m.

You don’t have to be a competitive Dragon Boater to enjoy the festival. Riversport’s popular SandRidge Sky Zip and Sky Trail, paddle boarding, water slides and other Adventure attractions open at 11 a.m.

Following the morning’s 5K and kayak event, at 10 a.m., the Whitewater Rafting League Championship will get started.

If you’re skittish of the raging rapids, you can grab a raft after the timed competition for your own rafting excursion.

The Stars & Stripes Festival has plenty more on its menu of opportunities. From 2 p.m. to 5 p.m., during Olympic Day, visitors can try various Olympic sports in a low-pressure environment.

“Olympic Day puts a spotlight on the unique fact that we’re the only river in America to have the Olympic designation,” Knopp said.

At 7 p.m., revelers can enjoy the Surf Zone, tubing and other Riversport attractions.

Food trucks will be on hand and visitors can sit back on the patio at Big Water Grill and enjoy the bar while watching the activities at Riversport Rapids.

The day concludes with a spectacular fireworks display.

“I think people coming together to celebrate the Fourth of July and also this great resource that we have and having fun is all about building community,” Knopp said. “I think we see a lot of pride in people when they come out and show off the river and the boathouses to their families.”