Holiday Cheer: The shop local movement ramps up its efforts during the holiday season 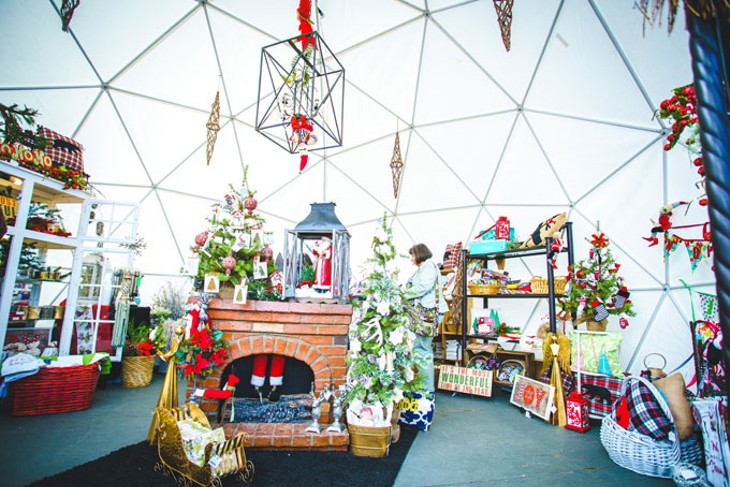 A few wooden pallets with leftover pumpkins from Halloween are the only things keeping the near-vacant lot warm at the corner of NW 10th Street and Hudson Avenue in Midtown Oklahoma City.

That is until late November when the empty gravel space transforms into a miniature winter wonderland equipped with six geodesic domes, a Christmas tree and enough retail vendors to keep Oklahomans busy throughout the holiday shopping season.

“We’ve set this up so you can say, ‘I bought everything I needed in a really fun, relaxing way, but most importantly, I knew for a fact that it supported a small business in Oklahoma City or somewhere in Oklahoma,’” said event producer Allison Barta Bailey, who started the pop-ups in 2012.

Holiday Pop-Up Shops is one of many events or businesses in OKC directly or indirectly participating in Small Business Saturday, a national campaign created in 2010 by American Express to help promote shopping local.

In 2016, an estimated 112 million consumers reported shopping at small businesses, a 13 percent increase from 2015, according to the National Federation of Independent Business (NFIB).

Barta Bailey said on any given weekend, 10,000 visitors roll through the shops located a stone’s throw from The Bleu Garten food truck park. Many more will roam the streets of OKC for Small Business Saturday, as areas like Midtown, 16th Street Plaza District, The Paseo Arts District, Automobile Alley and downtown, among others, participate in the community-driven event.

“There’s this continued idea of quality and having a story to tell with your gift,” Barta Bailey said. “It comes with this inherent story. It adds that layer to gift-giving that makes it special and doesn’t feel like you’re filling a box with something to give someone.”

The financial ramifications are key. Lindsay Zodrow, who owns Collected Thread in the Plaza District, said a majority of her holiday revenue comes from Small Business Saturday and when she sets up at the pop-up shops Dec. 14-17.

“It’s huge for us. It’s a big percentage of our sales for the month,” she said.

All of the districts have a familiar theme — they are all walkable, much like downtown, where Deluxe Winter Market, a one-day shopping event at Leadership Square, features original works sold by artists and vendors. While unaffiliated with the Small Business Saturday campaign, it provides another avenue for consumers to support OKC over big-box stores and online retailers.

Ultimately, the goal is to make every day Small Business Saturday.

“Some things may cost more, but if they could see it as investing in their community, I think a lot more people would do it,” said Bryce Bandy, the co-founder of Keep It Local OK, whose mission is to promote shopping and spending local via a $15 rewards card. “Wouldn’t you rather spend money with your friends, family and neighbors than going to some big place where the money goes somewhere else?”

McKenna Howard, creator of The Wild Sprout, a natural bath and body concept, is new to the retail scene, but she has quickly figured out the impact it can have.

“It’s a win-win for everything Oklahoma,” she said. “I never realized how shopping in stores locally can make a difference for so many different people.”

You won’t see any mad dashes for big-screen TVs or a block-long line for the new iPhone at any of the local shops in OKC.

If Black Friday is known for hectic, adrenaline-fueled fun, the following day is best described as the total opposite.

The local businesses provide a relaxing experience for consumers, which can be a refreshing change of pace to the usual hustle and bustle.

“You don’t want the Christmas experience at a stressful shopping place. You want this nostalgic idea of wandering with a cute coat on and a hot chocolate, buying a Christmas tree and buying gifts,” Barta Bailey said. “People come down for the idea of shopping in this environment.”

That night, the pop-up shops hold a champagne toast and light the Christmas tree. Katiebug’s and The Big Friendly Craft Beer Bus will be on-site to serve hot chocolate and beer.

Most of all, the atmosphere is conducive to consumer interaction where visitors can meet the creators. Several business owners noted how, over the years, some of their close friendships were created from selling a good or service.

“The crowd of people that come out to these shows are really interested in not only the product but the maker itself,” Howard said.

Howard is one of 60 different vendors at Deluxe Winter Market, where the motto is “If you didn’t create it, you can’t sell it.”

“I feel like every bag of dog treats I sell is giving a little piece of myself away in a great way,” Bark & Breakfast owner Tara Voth said. “I really feel passionate about what I do. I feel excited about what I do, and to see it adds value and adds joy to other people’s lives is an exciting, thrilling rush. I can’t imagine my business being in any other city because this city has supported me beyond my wildest dreams.”

Print headline: Substantial shop; The shop local movement ramps up its efforts to spread the word about the importance of supporting local businesses during the holiday season.