Pollard Theatre Company transforms a holiday classic into a radio drama for the stage. 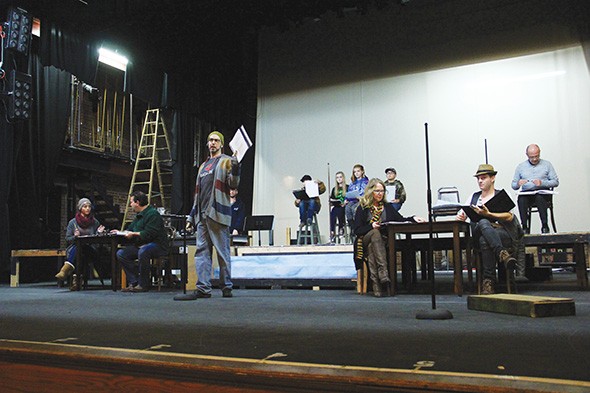 Guthrie’s Pollard Theatre Company has been staging A Territorial Christmas Carol for 30 years, but this year, artistic director W. Jerome Stevenson said the company just couldn’t do it. There was what Stevenson described as an “inherent sadness” in the idea of returning to the play after James Ong, a founding member of the company who defined the role of Ebenezer Scrooge in nearly two decades of performances, died in February.

“It became clear that for our sake and for the audience’s sake, we needed to produce something that didn’t have quite the memory hold on us after the passing of James Ong,” Stevenson said. “We started looking at what we could do as an alternative. … It was kind of a big search to find what was going to fill that void temporarily.”

Ultimately, Stevenson settled on replacing Pollard’s Carol, an adaptation of the Charles Dickens classic set on the Oklahoma frontier after the Land Run of 1889, with another high-concept take on a holiday staple. It’s a Wonderful Life: A Live Radio Play, runs Nov. 23-Dec. 23 at The Pollard Theatre, 120 W. Harrison Ave., in Guthrie. The play, written by Joe Landry, reimagines the 1946 Frank Capra film as a production for the radio.

“There are actors around microphones that are portraying the various characters,” Stevenson said. “There is a Foley operator who is creating the sound effects that go along with that action. … Much as is the Pollard way, we love to break down the components of a piece and eliminate some of the noise, as I like to call it, to give you the essence of the story itself, and this, I thought, was a really good example of how that could be done with a theatrical style.”

While Dickens’ work is heavily associated with 19th-century England, It’s a Wonderful Life, based on a short story Civil War historian Philip Van Doren Stern sent out as a Christmas card in 1943, tells an all-American story. In the film, deeply depressed George Bailey (Jimmy Stewart) is contemplating suicide to end his financial and personal problems until Clarence (Henry Travers) shows him how much worse off his friends and family would be had he never existed.

“The story is so much more resonant, in my opinion, to America because it is kind of America’s version of A Christmas Carol,” Stevenson said. “It is a uniquely American story, that kind of ambition of wanting to experience more and do more and feeling like maybe your life has been wasted. … There is such an idea that goes along with the American culture of giving more to your children than you had, and then the idea of ambition, particularly in relation to your job, your vocation, that level of success.”

While Bailey feels like a failure because he never seems to make enough money and many of his childhood dreams have gone unfulfilled, his generosity and moral code have made other people’s lives better. He has given up all his dreams to help the people around him, and it turns out is that is an extraordinary thing. It’s such a tragic idea that he would think that is a failure. But, of course, as we learn throughout the course of the evening, it is not a failure. It is the ultimate riches, the ultimate treasure.”

Recreating a familiar film classic with an all-star cast from Hollywood’s golden age is a challenge for a stage production.

“How do we find those iconic characters and give the audience what they are used to hearing without mimicking those characters?” Stevenson asked. “Lionel Barrymore gives such an epic performance in that film, and of course Donna Reed and Jimmy Stewart have such epic performances. So we needed to make sure they weren’t doing an imitation because those actors were one of a kind. What we want is to create the same sense, the same pattern and rhythm and tone that they produce in the film because while normally we can say the audience doesn’t know what that line sounds like until we say it, the audience will know exactly what that line sounds like.”

By adapting the story to a recreation of a live-in studio radio broadcast, the play conveys the meaning without requiring extensive sets while maintaining the spirit of the slower-paced time period of the film.

“Because the story was written in the ’40s, there wasn’t mass media as there is now,” Stevenson said. “There wasn’t television, and there wasn’t all this visual stimulus to make a piece work. As technology has gotten greater, I think we forget that the nature of theater is storytelling, and from its roots, it’s oral storytelling. … It’s not going to be about moving pieces of scenery, it’s not going to be about smoke pots and magic tricks; it’s going to be about amazing individuals and what we know to be true but we forget because our lives are so inherently busy and bustling and we’re always trying to get more.”

Adopting a radio-age mindset hasn’t been easy for Stevenson and the cast of actors who grew up in the TV and internet era.

“We had to, and are still having to, remind ourselves that the style of performance is very different,” Stevenson said. “It’s not nearly as subtle as contemporary film is, or even in some cases as contemporary theater is. It’s changing your voice in big, broad ways to give the audience a sense of different characters because in truth, they would be listening to this over the airwaves; they wouldn’t be seeing all your gestures and all your facial expressions to help you sell an idea. So as much as we can, we’re trying to make sure that rings true for the audience.”

Conveying the concept of a live radio broadcast to the child actors in the play is especially difficult and requires Stevenson to adapt his directing technique.

“A lot of what you can do with kids is give them an action that helps them support the emotion,” Stevenson said. “So if they’re running and playing, they tend to laugh, but with a radio play, they’re not going to be running around or sliding down a hill, so you have to really help them find a sense memory. Children really have a natural tendency to want to play, and that’s what theater is. It’s a desire to play and producing it in a way the audience can understand it. We’re having a blast.”