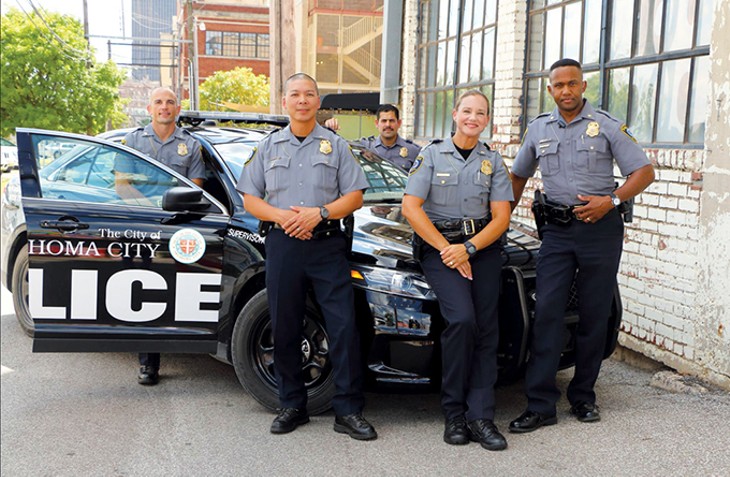 “Handle with care” is a three-letter phrase that could change the life of a child going to school in Oklahoma City. At the beginning of the 2018 school year, Oklahoma City Police Department (OKPD) partnered with Oklahoma City Public Schools (OKCPS) to launch the Handle With Care program, one that is simple by design but has the ability to impact a child significantly.

Balderrama explained how the Handle With Care program begins when a police officer is called to a home or a situation where a minor is present. The officer then asks for the child’s name.

Once in their patrol car, the police officer sends an email to Terry Bell, executive director of Student Support Services at Oklahoma City Public Schools.

The email says simply, “Handle [name of child] with care.”

“That’s all we really need to know. We don’t need to know the details of what happened to that child,” Bell said. “We trust our police officers and if they think we need to handle that student with care than that’s what we do.”

Once Bell receives the email, she locates the OKC public school the child attends. She then forwards the email to the school’s principal, counselor and social worker. The principal, Bell said, notifies the student’s teacher.

“Once the student’s teacher gets that notice, I believe it can make a world of difference,” nonprofit coordinator Adrienne Elder said.

A devout community health advocate, Elder said she was combing through community newsletters when she learned about a program that was being used in a public school district in West Virginia, where children experience high instances of trauma. The idea of acknowledging childhood traumatic events, also known as adverse childhood experiences (ACE), when they occur in childhood instead of later in life strongly appealed to her.

“ACEs have been known to have long-lasting detrimental effects on a person’s life. They affect health by increasing the likelihood of developing illnesses like depression, anxiety, cancer or inflammation, and they affect employment and educational opportunities as well,” Elder said. “It’s usually not until a person suffers exponentially that they even discover that their childhood trauma impacted them so much. The notion of addressing a child’s trauma when it’s experienced is not just game-changing; it’s life-saving.”

“This is a community that experiences trauma,” Balderrama said. “Sixty percent of children who attend Oklahoma City public schools experience trauma. This program is an ideal fit.”

Once a teacher is given notice to handle a student with care, Bell said, a variety of care methods and tactics can be used.

“The notice lets a teacher know that if that student is sleeping through class, it’s because they likely were up all night long dealing with a traumatic experience,” Bell said. “It’s a heads-up for the teacher to go easy on that student.”

A teacher can react to a tired student by sending them to the counselor’s office, where they can continue to rest or talk about their feelings. The same method can be used if the student is acting out or fighting in class. Either way, Bell said, the child will not be reprimanded.

“The last thing they need,” she said, “is to go through another round of hostility.”

The care is extended and expanded upon if a child displays symptoms of distress.

“If a school counselor determines that a child needs help, our social worker is called in and we take a hands-on approach to addressing the problem,” she said.

That approach, Bell explained, has developed over the years to become one that involves not just the student, but his or her family as well.

Depending on the student’s unique situation, a school district-employed social worker can talk with the student, visit the student’s home and meet with his or her parents while assessing the family’s emotional, physical and financial wellbeing.

Once the social worker assesses the family’s needs, they can begin to  provide them with resources they need to heal or improve. Those resources, Bell said, could include family counseling, further educational opportunities or nutritional assistance.

It’s a holistic approach that Elder is proud to watch unfold.

“We have learned that ACEs are cyclical. An adult who suffered from trauma as a child is more likely to create a similar environment for his or her own children, and until wounds are addressed, the cycle continues. To just treat a child’s symptoms is ineffective,” she said. “When the whole family is treated, everything changes and the cycle can be broken.”

So far, Bell said, about a half a dozen Handle With Care emails have been sent. She hopes that other school districts in the state will replicate the program.

“There is no community in the world that is exempt from experiencing trauma,” she said. “This should be used everywhere.”

It’s not every day, Elder said, that a program comes along that costs nothing, takes very little time and creates a positive rippling effect throughout the community. A lot can be accomplished with three little words.