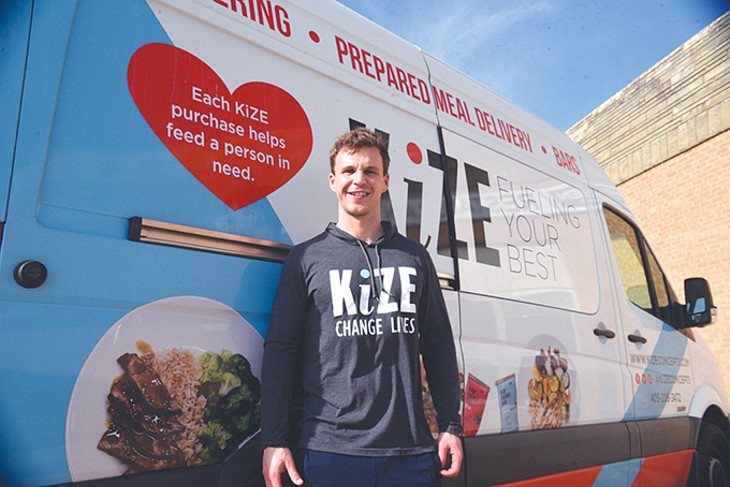 University of Oklahoma graduate Jeff Ragan founded Kize in 2013. He was looking for an opportunity to combine his three passions: helping people, entrepreneurship and health and fitness.

“I can’t draw or play an instrument, so this is my creative side: to come up with ideas to help people live healthier,” Ragan said inside the Kize office and manufacturing center, 1740 W. Main St., where the company produces eight flavors of all-natural energy bars.

“The problem we address is hunger, but I use that in a holistic sense,” Ragan said. “People are starving for real meaning, love and good relationships. I love helping people, and I want to build a company that does that.”

Ten percent of every purchase of a Kize energy bar goes to benefit local and global missions. For every meal purchased at Kize’s prepared meal service, Kize donates a meal to a local food bank. Ragan said Kize has donated nearly 50,000 meals since 2013.

Kize works closely with Tulsa-based humanitarian organization With All My Heart Foundation to organize annual mission trips to Haiti. The company will go to Haiti for its fourth trip at the end of May.

In recent trips, they’ve help build an orphan home, medical clinic and church while hosting other community events in Haiti.

“The Haiti thing is glamorous to people,” Ragan said. “The same people might walk past a homeless person in downtown and not look at them. We do both.”

Ragan admitted that he was initially apprehensive about publicizing Kize’s philanthropic efforts, not wanting to be misconstrued for opportunistic “cause marketing.”

“[Now] we try to share that narrative because we want to energize people,” Ragan said. “Not just for the food, but also to inspire people to find their passion to serve others.”

Kize began its operation in an OKC Farmers Market District warehouse without temperature control and sold its bars in a much larger package, about two and half times the size of its current 1.6-ounce product, as a meal replacement.

As Kize added machines to produce the bars, they settled on the current size, which is intended to be an all-natural snack or pick-me-up. The company has gone from part-time and volunteers to a full-time staff of 10 employees with an additional three to four part-time salespeople.

“There was never a goal to build a bar company,” Ragan said. “The goal was to build a platform that changes lives. If we stay true to those values, we can make anything.”

Ragan views the Kize model as a for-profit business that operates with a nonprofit heart. He said he didn’t want to incorporate as a nonprofit because he wanted to generate the company’s own revenue, instead of relying on grants or donations.

“I want to transform how people think about business, especially for-profit [businesses],” he said. “One of the worst things that ever happened for our parents’ generation, and a little before that, was that big business became about making as much money as possible. I think that’s the worst thing because if that is how you define success, people get cut and hurt in the process.

“I’m not saying people don’t get fired, but profit is an outcome. If the input is doing the right things in the right way, the outcome is you have a profitable business and then what you do with that profit isn’t a full hoarding by the owner or stockholders, but it’s the distribution of things. If you can get that mindset to more people, that’s a game-changer.” 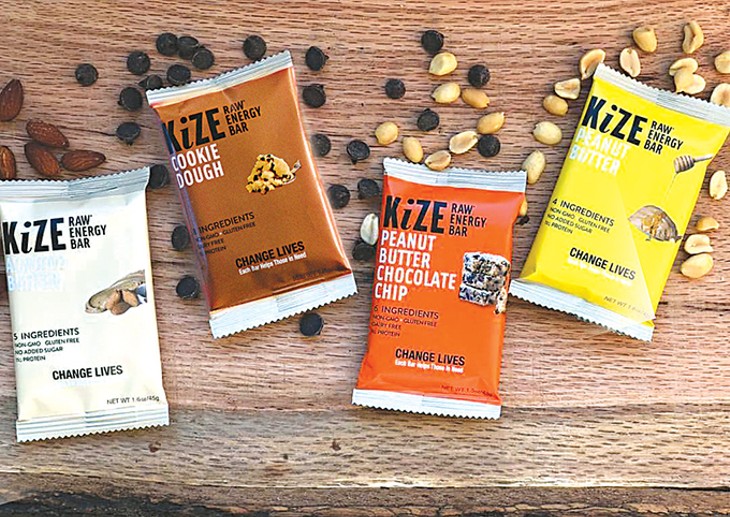 Sales of energy bars account for the biggest percentage of Kize’s income. They can be purchased through Kize’s website or at partners like Wheeze the Juice and Stella Nova Coffee. Catering service accounts for its second-biggest percentage, and there are weekly meal plans available for pick-up or delivery.

Health and nutrition are passions Ragan developed while going to the gym in high school. All of Kize’s food is real food, made without preservatives and artificial flavors.

Each bar has a short ingredient list and encourages refrigeration for prolonged freshness. Ragan said America’s rise in obesity started after WWII with the globalization of food, which encouraged additives and preservatives for longer shelf lives.

“Everyone is jumping to the latest fad [diet],” Ragan said. “Don’t get caught up in that. At the end of the day, if you look at the history of the world, we live in the time and place where people are the unhealthiest.

Kize will undergo an expansion at its current facility, which is located inside the Amundsen Commercial Kitchen building, in the next two months.

Kize will undergo an expansion at its current facility, which is located inside the Amundsen Commercial Kitchen building, in the next two months.

“If it weren’t for the people of OKC helping us out, we wouldn’t be able to keep going,” Ragan said. “If people think highly or well of Kize, I hope they can take some pride in being from OKC.”