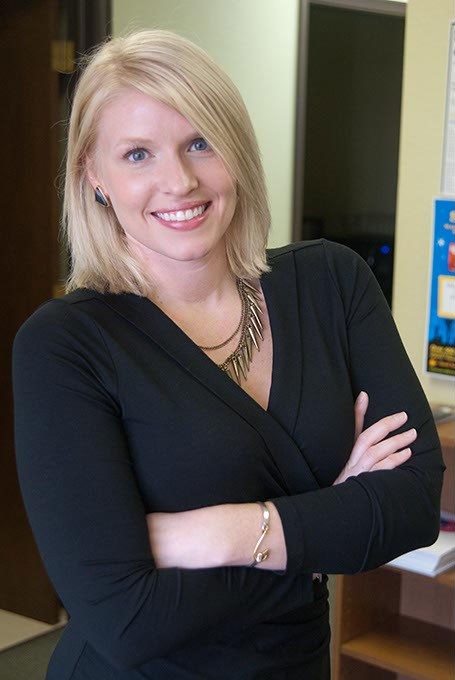 “As an outsider, people kind of expect you to just come in and leave,” Moye said. “I’ve been pleasantly surprised by how fun and open people are to ideas and experimenting and seeing what works.”

Both Moye and OVAC are excited and interested in the other’s future and enthusiastic about partnership opportunities between the arts coalition and the college.

Moye accomplished a lot during her time with OVAC. She said one of her favorite things about the job was getting out into the community.

OVAC works as an arts advocate across the state.

Though she will not see the project to its completion in May, Moye said she is proud of the work she and other OVAC members put into organizing the first Momentum Ada, a festival for young, emerging southern Oklahoma filmmakers.

Moye steps into some uncharted territory at OCU.

Her role is new, meaning she has some freedom to forge her own path. Before Moye, the School of Visual Arts was headed by a dean.

The school hired Moye as it works to reinvigorate its visual arts program and gain a bigger foothold in the city’s growing arts scene.

“I am thrilled the interim dean and the associate dean and the faculty are so open to new opportunities and growth,” she said, “and finding ways for the School of Visual Arts to offer something different in the state of Oklahoma.”

OVAC board president Susan Green said the board is happy that Moye — and her skillset — is staying in Oklahoma.

Green said the OVAC board is now searching for “the perfect person” for the job but there are many molds from which that candidate could emerge. Green said the next executive director should be someone who has the drive to work within the state’s communities while inspiring others to make and interact with the arts.

A preliminary submission deadline was set for early February, but Green said later applicants could be considered, too.

Though Moye was selected from a national search, OVAC will equally weigh local and national candidates.

State arts funding is not in for a boost anytime soon, and national funding could be in peril as well.

Green said these uncertain times in the arts mean an executive director position is even more crucial at this time.

“People need art more than ever before,” she said. “They need that inspiration; they need the important messages that art brings to us.”

print headline: Moye options; Holly Moye is grateful for her time at OVAC as she carves a new role at OCU.