Jewel Box Theatre moves onto Baker Street with The Game’s Afoot (or Holmes for the Holidays). 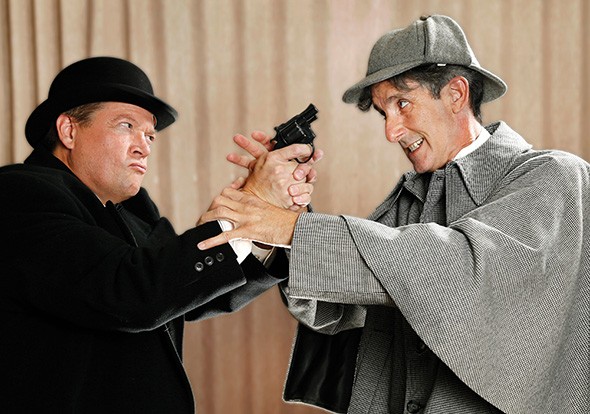 The first mystery to solve in Ken Ludwig’s Sherlock-inspired farce The Game’s Afoot (or Holmes for the Holidays) is what exactly is going on.

“This is so confusing,” said Billie Thrash, director of the production playing through Dec. 9 at Jewel Box Theatre, 3700 N. Walker Ave., when trying to describe the plot. “It will hopefully become clear.”

The Game’s Afoot, which won the 2012 Edgar Allan Poe Award for best play from Mystery Writers of America, begins with the ending of another play, a production of William Gillette’s Sherlock Holmes, adapted from the works of Arthur Conan Doyle. Gillette, a playwright and actor known for his stoic-yet-enthralling stage presence, “created the iconic Sherlock Holmes that we all think of today,” Thrash said. In Ludwig’s play, Gillette has just finished a performance of his Sherlock Holmes when he’s embroiled in a mystery of his own.

“The play actually starts with somebody not in the play firing a gun and wounding the lead actor, and that person escapes,” Thrash said. “A crime occurs, but who did it? And it’s actual, as far as the quote ‘fake play’ is concerned.”

While Gillette was a real person, Thrash said, Ludwig invented the “big intricate murder mystery” at the heart of The Game’s Afoot.

“Ludwig had this crazy idea of making Gillette one of the main characters in a play, but it’s not based on any actual incident,” Thrash said. “He just made it up. … He based it on this idea of ‘What if William Gillette had invited his cast of the current Sherlock Holmes play to his home for Christmas?’ and what happens is, of course, murder ensues.”

The play, set in December 1936 when real-life Gillette was 83 years old, takes significant liberties with his life story. For example, the script describes Martha, Gillette’s mother in the play, as “a smartly dressed, somewhat vague and dithering woman in her mid-70s.” Gillette’s actual mother, Elizabeth, died in 1893. One true detail included in the play is Gillette’s lavish house modeled after a European castle.

“Gillette was known in real life for entertaining,” Thrash said. “He had a big, plush home in Connecticut, and so when his casts would be performing one of his plays, particularly the Sherlock Holmes play, on Broadway, he would always entertain them in his home.”

When one of his guests is killed, Gillette decides to draw on his years of experience playing the world-famous fictional detective to crack the case.

“Everybody is starting to put their two cents’ worth in solving the mystery and how it happened and whodunit,” Thrash said. “But does his familiarity with the fictional character of Sherlock Holmes help him with solving the mystery?”

While Gillette’s mansion serves as the setting for most of the play, Ludwig’s script notes, “It does not look like the real Gillette Castle interior, which is stone and wood. There is nothing dark or medieval about this room. It looks like an art deco dream world.”

Madge, one of Gillette’s houseguests in The Game’s Afoot, offers a different description.

“It would be excellent for a murder,” Madge says. “It’s isolated, there are loads of rooms for hiding the body and it’s on a river so you can drown people. What more do you want, an ax?”

Thrash said Ludwig is known for writing comedic plays such as Lend Me a Tenor, but the playwright wanted to combine humor with the thrills of a classic whodunit.

“Ludwig basically is a writer of comedy and farce, but he is totally fascinated by murder mystery plays,” Thrash said. “Since Gillette was a playwright who dealt with one of the greatest mystery heroes of all, which was Sherlock Holmes, he decided to make it him and combine the comedy, farce and mystery elements.”

In the foreword to The Game’s Afoot, Ludwig describes his efforts to write a “relentlessly entertaining” murder mystery after seeing Agatha Christie’s The Mousetrap with his family.

“The greatest mystery plays are plotted meticulously,” Ludwig wrote. “They’re not character studies of a freewheeling nature; that’s not their territory. … A mystery play that lacks a good plot in this sense — that is not well-plotted architecturally — is never a very good one.”

“It’s a really fun combination of both farcical comedy and a real intricate murder mystery,” Thrash said. “You don’t want to get too silly with it, and you’ve still got to walk that fine line between these highly amusing characters and the fact that a crime has been committed that has to be solved.”

Set design and prop placement become crucial as well because seemingly insignificant details might become important later on, but placing evidence and hints too prominently can give away too much too soon.

“Any good murder mystery provides clues along the way to help the audience try to form their own opinions on whodunit,” Thrash said. “Most of these things start with the murder or with an incident of some sort, a crime of some sort, and then the people at the party or wherever this thing is set try to figure out what happened and are themselves in danger. That’s an added element. So you have to keep the clues clear but not obvious because pretty soon you’ve got a big, wide body of suspects and the trick is to make the audience, in addition to enjoying the comedic elements and the fun stuff, … be able to clearly follow and start forming their own opinions. … You can’t leave the audience out of this even though they’re not an actual participant.”

Don Taylor, who plays Gillette in the Jewel Box production, benefits from having previously played Sherlock Holmes onstage. Though Gillette is his own character, he becomes more influenced by the fictional detective as the play progresses.

“He doesn’t really take on the persona of Sherlock, but he does,” Thrash said. “He uses everything he ever found out when he was writing about him supposedly, in this scenario that Ludwig has set up. And he has delusions of being Sherlock himself, not actual delusions, but he thinks he knows more than he does.”

“It’s an interesting puzzle to work out,” Thrash said. “Let me put it that way. And that’s what it is, a puzzle.”

The Game’s Afoot (or Holmes for the Holidays)