Lyric Theatre’s Having Our Say reveals 20th-century America through the eyes of two centenarian sisters. 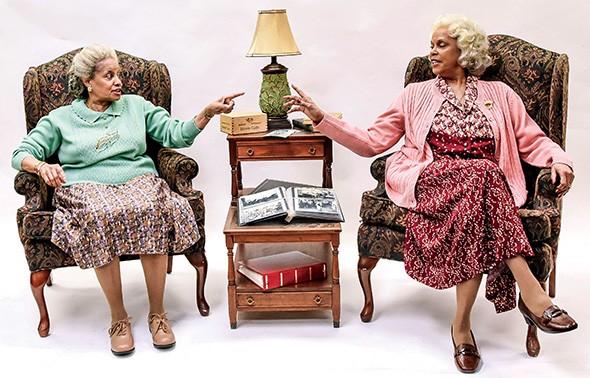 Monique Midgette remembers her grandmother’s house — the sights, the sounds and the smells.

“The house always smelled like food,” Midgette said. “Something was always cooking. You could always find some good food at my grandmother’s house, and there was just always so much to see. I think in that time period, everything meant something, so there was always a trinket or, ‘This picture reminded me of this,’ or ‘This was a tray that was given to me by this person,’ so walking through my grandmother’s house was like walking through a museum.”

Midgette directs Having Our Say, running Feb. 19-March 8 at Lyric Theatre, 1727 NW 16th St. She said the banter between the play’s protagonists Sadie (played by Julia Lema) and Bessie (Terry Burrell) Delany, both over 100 years old, reminds Midgette of the “kinship, friendship and love” she felt visiting her grandmother’s house as a child.

“These are conversations that I’ve had or have been privy to my whole life, sitting in my grandmother’s kitchen, while she’s talking to her friends,” Midgette said.

Adapted by Emily Mann, the play is based on the book Having Our Say: The Delany Sisters’ First 100 Years, an oral history of the sisters’ life recorded by Amy Hill Hearth, originally assigned to write a profile on them for The New York Times. In more than a century together, the Delany sisters moved from the Jim Crow-segregated South to Harlem to the middle-class suburbs. Onstage, Bessie and Sadie tell stories from their lives while preparing dinner to celebrate their late father’s birthday.

"When you get past a certain point, you can say whatever you want because you’ve been here long enough to earn that right."
—Monique Midgette tweet this

“I believe it helps you feel like you’re invited into their life,” Midgette said. “There’s a lot of information, and there’s a lot of stories that the women tell. … But there’s a difference between sitting in someone’s living room and feeling how homey and familial that is and a play where people are just talking. So everything about how they’re dressed and all of the actions that happen in the show help you feel like you’re in the world of these sisters. Some of the actual food will be cooked onstage, and we’re going to be actually cooking food backstage so the theater will smell and feel like there’s an actual meal taking place, and then you’ll leave and want to go have some home-cooked food somewhere.”

Midgette wants the smell of home-cooked food to trigger the audiences’ pleasant childhood memories the way rehearsing the play triggers some of hers, but the logistics of having actors prepare food live onstage require Midgette to take a different approach to directing the script.

“I want to say there’s maybe six or seven pages of props, and I want to say four of those pages are food, so it changes everything, but after the shock wore off in time and I had conversations with people that cook, because I don’t really cook, it [comes] down to the fact that this is what they do every year for this father’s birthday celebration, so we’re just trying to make sure that we can organize it in a way that these women who have been cooking together for years would both orchestrate the meal in the kitchen and all of the things that it takes to celebrate their dad. … There was lots of preparation, lots of conversation … but you hire two accomplished actresses who also cook in their own homes, and they bring a lot of the knowledge,” Midgette said. “And they’ve been friends for years, too, so the comfort and knowledge that they bring into the room is helpful. So I just kind of lay out a ground plan and say, ‘OK, let’s just start and see where we go.’”

When she was hired to direct the play, Midgette said she knew she wanted to cast Burell, who — in addition to roles in Broadway productions of The Threepenny Opera, Into the Woods and Dreamgirls  — played Midgette’s mother in a 2007 production of The Women of Brewster Place.

“Terry and I spent a lot of time together years ago,” Midgette said, “so Terry was the first person that popped into my mind. … When I knew it was Terry, I said, ‘You’re going spend a lot of time with this person, so you should probably have a lot of say into who your sister is,’ and she just gave me a list of some of her friends, people she wouldn’t mind spending some time in Oklahoma with, and we looked at some videos, and Julia was perfect.”

In addition to their acting abilities, Burrell and Lema’s friendship and culinary knowledge helped overcome some the play’s unique challenges.

“This is a two-handed play, so they had to come to rehearsals pretty much knowing the play already,” Midgette said. “If they had to learn the play, learn each other, learn how to cook, we don’t have time. It’s good that they already can feel comfortable with each other and bring a lot of knowledge, so now it’s just about shaping and crafting who these women are and the story that they’re telling in this particular piece.”

True to the play’s title, the Delany sisters told their story exactly how they wanted to.

“When you get past a certain point, you can say whatever you want because you’ve been here long enough to earn that right,” Midgette said. “And that’s the best thing about these women. … They say, ‘I’ve been here for 100 years. I can say what I’m thinking,’ so there’s a lot of sass and wisdom in this play that is so much fun.”

In many ways, the Delaney sisters’ experiences reflect the history of 20th-century America.

“Everything that happened here happened to them,” Midgette said. “To me, that’s the most important thing about this, the fact that you just sit and listen to the stories of the two women that you didn’t really know and understand that everybody has lived a life. To have been here for over 100 years, all the things they’ve seen hopefully make you look at everybody that you pass on the street differently. What have they been through? And how can I be a little kinder to everyone that I see, knowing that literally everybody has been through something and might be going through something right now?

“It’s probably a tough sell in some ways to get people to come out and hear two old ladies talk, but it’s so worth it. ... It’s one of those shows where even if you don’t remember everything that they say, you’ll remember how they made you feel. … You remember what it was like in a space when you just maybe felt warmer, more open, more optimistic about the world, when we were younger. In comparison, there’s nothing that you’ve been through, nothing that you’ve done that they haven’t seen, so it kind of makes you feel like, ‘OK, I can get through this because they made it to 101 and 103.’”