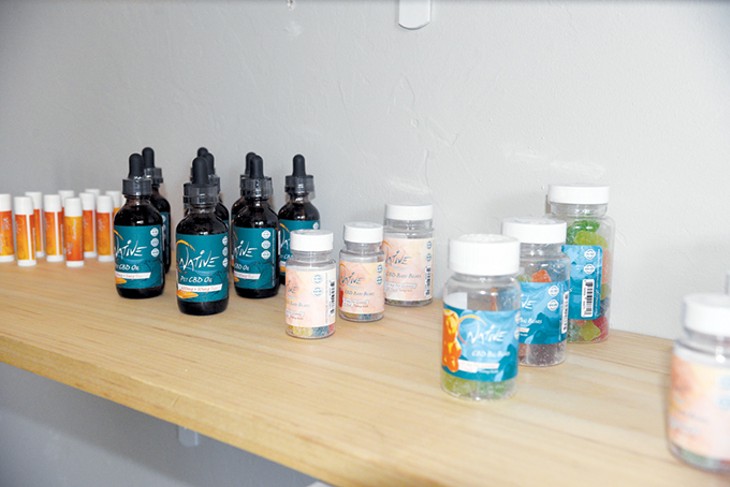 Mary Najar remembers the day before she and her husband opened their hemp oil and cannabidiol (CBD) products store in Paseo Arts District in the fall of 2017. Their store would be the first brick-and-mortar store to sell CBD oil in Oklahoma City. But it wasn’t nerves about opening day that kept Najar up at night. It was the fact that she was broke.

Najar and her husband, Hector, own Herban Mother, a CBD products dispensary located at 607 NW 28th St. in Paseo Arts District and a new location opening Aug. 25 at 10717 N. May Ave. The couple had been selling produce from their farm and CBD oil at a local farmers market for years. When customers began raving about the healing effect of the oil, they felt a strong calling to open Herban Mother.

“Despite the fact that we were broke, we really didn’t do this for the money. We did this because it felt like the right thing to do,” Hector Najar said.

The couple couldn’t get approved for a small business loan because they had little credit history and, Mary Najar said, possibly due to the fact that they were selling a substance that carried with it prejudice and controversy. With no financial assistance, the Najars sold everything of value they owned, including a gold ring that Hector’s grandfather passed down to him.

“We were all-in,” Hector Najar said. “I have been all-in for a long time.”

A United States Air Force veteran, Hector Najar served in Desert Shield, Desert Storm and was stationed in Germany. Najar came back to the States, he said, with pride and pain.

“I had severe pain in my back from a degenerative disc and arthritis,” Najar said.

He was living with Mary in California when a local CBD oil vendor sprayed the substance on his back. Within seconds, Najar said, he felt relief. His interest in CBD oil piqued. The couple spent the next few years studying the benefits of medical marijuana and CBD oil.

“This stuff helps with just about any ailment,” Najar said. “It helps lower blood pressure, it can reverse the effects of diabetes, it’s an anti-inflammatory, it helps people manage rheumatoid arthritis, lupus, Parkinson’s disease — you name it. I’ve seen CBD products help people get off opioids, meth and heroine. I believe this cures cancer.”

"I knew some of the stuff that was proposed previously would not stand." —Christee Wittig tweet this

That last part, Najar said, he came to believe too late. His mother died from a brain tumor before he became an expert in CBD oil. He wishes he had the opportunity to introduce her to CBD oil or to medical marijuana.

“To say I am an advocate would be correct,” Najar said. “But I am more than that. I’m a pissed-off advocate.”

It’s hard to imagine that his mother died prematurely because being politically correct in Washington mattered more to politicians than saving lives, Najar said. But it’s not unlikely.

“That’s likely exactly what happened,” he said. “The scientific community has known about the benefits of cannabinoids for years, but only recently has that information become known to the public.”

Najar hopes the same politics that limited progress in Washington won’t manifest in Oklahoma. He said the new medical marijuana regulations that were signed by Gov. Mary Fallin on Aug. 1 are an improvement from a previous version announced by Oklahoma State Board of Health in July.

According to the board, dispensaries and patients will be able to apply for a license to sell or purchase medical marijuana by Aug. 25.

As soon as the application is available, Najar said, he’ll apply.

Christee Wittig knows what it’s like to sacrifice for a dream. The owner of The Peak Plaza Dispensary in OKC put all the money she and her fiancé saved for their wedding into opening their business.

“Right after voters approved of it, I just knew we had to open a dispensary,” Wittig said.

She currently sells CBD products but is prepared to sell medical marijuana as soon as possible — by November or December, she anticipates.

A few years ago, a routine doctor visit revealed that Wittig had precancerous cells growing in her body.

“I took my health into my own hands. I completely turned my life around,” she said. Wittig began eating whole and organic foods and tried CBD oil as well.

She became passionate about providing medical marijuana to those in need. She reached out to friend Corbin Wyatt to see if he could help with the marketing side of her business.

The Peak opened its doors and launched its website in June.

“As soon as we got our website up and running, we started getting phone calls, about 30 to 50 a day,” Wyatt said. “These people are from all walks of life. Of course, you’re going to have a handful of people calling to see if they can get marijuana to get high, but the vast majority of people we speak to want to know if medical marijuana can help them manage their pain.”

Wittig is excited to announce that her body is free of precancerous cells, and Peak will soon open a new dispensary that she said will be the largest one in the state. When and where the dispensary will open is under wraps for now.

“We want to be a part of this community,” Wyatt said. “Forty-two percent of Oklahomans don’t believe in this cause. I think there’s this preconceived notion that this is a shady business and that businesses like ours create shady neighborhoods. I want to do everything I can to prove that false.”

Wittig said her efforts to gain credibility began internally. Each of her employees is paid more than minimum wage. She also insists that the business recycles and uses only organic and pesticide-free products, a value shared by the Najars.

To give back to the OKC community, The Peak Dispensary is working on partnering with a local food bank and other nonprofit organizations.

The newly revised medical marijuana regulations give her cause to celebrate.

“I knew some of the stuff that was proposed previously would not stand,” she said.

Visit ok.gov/health for up-to-date information on the status of medical marijuana.