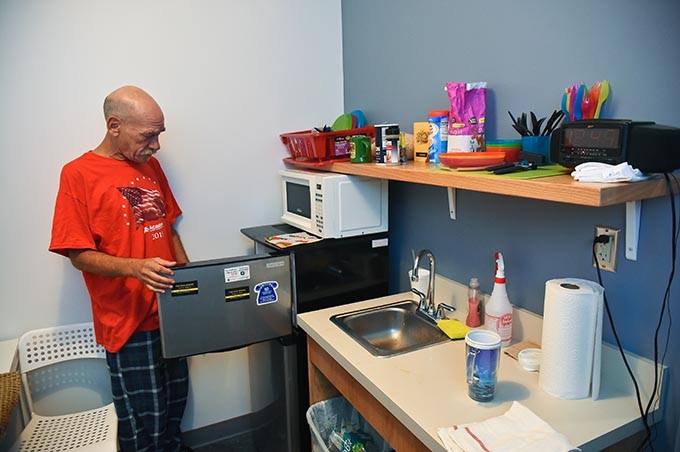 The Homeless Alliance recently completed construction on a housing complex that will serve as one long-term solution to help end homelessness in Oklahoma City.

WestTown Apartments, designed for veterans and medically vulnerable homeless, consists of 20 250-square-foot apartments, each outfitted with a bathroom and kitchenette.

Kim Woods, deputy director of The Homeless Alliance, said they are meant to be permanent housing for some of Oklahoma City’s most at-risk homeless.

“They may decide to leave based on a desire for amenities we don’t have,” she said, “but we intend for [WestTown] to be a long-term solution.”

It also will function as transitional housing to help move people from chronic homelessness to a degree of self-sufficiency they can manage.

Chronic homelessness is defined as being on the streets for more than a year or three times in the previous four years.

Woods said there are 12 residents and the organization will continue to assess candidates for qualifications and need.

Groups of volunteers canvased the city as part of 100,000 Homes Campaign and Journey Home OKC to ask triage questions of the metro’s homeless population.

A critical focus of the plan was medical vulnerability.

Those with the highest needs — veterans with medical vulnerability — were assigned priority.

On Sept. 11, the first group moved into the apartments, located on the WestTown Homeless Resource Campus on NW Fourth Street.

Among its first seven residents was Randy Brown, a U.S. Marine veteran who spent six years living on the street before moving into his new home.

Brown served eight years in the Marines before a heart condition earned him a medical discharge.

The southside Oklahoma City native went to U.S. Grant High School and said he joined Marine ROTC to “piss his dad off.”

He later worked as a union electrician for a stretch and has been married for 35 years.

Describing the apartment as “heaven,” Brown talked about chronic homelessness and other issues.

“I’m dancing with demons,” he said. “I put them in check, but they’re always going to be there.”

Larry Murray also is a Marine Corps veteran, but his medical discharge came only six months into his career.

He briefly lived with his daughter but has since lived on streets, in hotels and in campers.

His ability to work consistently is hampered by persistent health issues, but he draws a little Social Security income.

“I like it here; got an icebox and a microwave.” Murray said. “It’s the size of a bedroom, but I like it.”

The units are small, but they serve the purpose for which they were intended.

Residents have access to washers and dryers, as well as other services provided on the WestTown campus, Woods said, including meals, case management, counseling, computer access and many other services from organizations that are part of The Homeless Alliance. 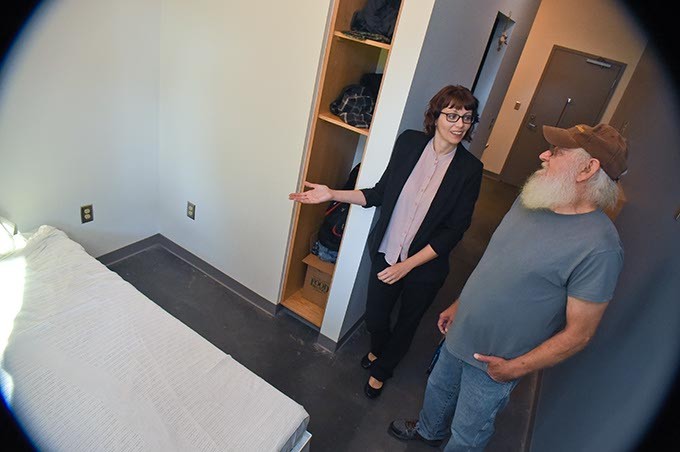 Rent is 30 percent of a resident’s income, a flat rate that also covers utilities.

“They are basically using housing choice vouchers,” she said. “Some will not be able to work due to medical disabilities, but they will still pay based on whatever income they have.”

Housing choice vouchers are part of a federal program that assists low-income families and other vulnerable populations in affording safe housing. Woods said there is a shortage of available housing citywide for people who have vouchers.

“There are a lot of people out there who have these vouchers,” she said, “but the rental market is so tight right now, there simply are not enough homes and apartments, so they have no place to go. The WestTown complex will help with that shortage.”

The Homeless Alliance, a nonprofit, has been involved in several measures to end chronic homelessness by 2016. According to statistics from The Homeless Alliance’s 2012 Point-In Time study, there are more than 1,300 homeless individuals in OKC, and up to 20 percent are categorized as chronically homeless.

Project funding came from private and government sources, and the total cost was $1.35 million.

The City of Oklahoma City was able to use Home Funds through a United States Department of Housing and Urban Development project to partially fund the apartments. Inasmuch Foundation, Gaylord Foundation, 7-Eleven stores and Leeman Family Foundation covered the remainder of the cost.

Several organizations and individuals contributed to the complex in other ways. Frankfurt Short Bruza designed the development, and the contractor was Lippert Bros., Inc. Utility costs will be kept to a minimum thanks to conservation programs from OG&E and a donation from ClimateMaster to help pay for the latest in geothermal technology.

Print Headline: Providing shelter, The Homeless Alliance and partners help build a housing complex for veterans and other homeless people.