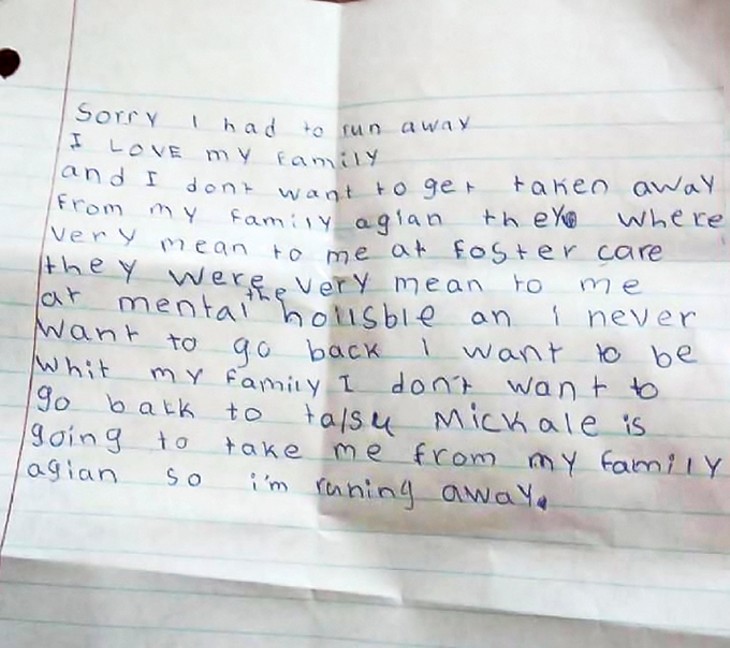 Oklahoma parents found it hard to ignore a letter 8-year-old Elijah Muhammed left for his grandmother before he ran away in July. “I love my family,” Muhammed said in the letter. “I don’t want to get taken away from my family again … so I’m running away.”

Elijah’s story quickly went viral with social media users wondering why Elijah ran away from his grandmother who was assigned custody of him by Oklahoma’s Department of Human Services, why he was separated from his biological parents to begin with and if he was all right. Elijah’s 12-year-old brother with the same name had been missing since June.

The boys were named after their father, Elijah Muhammed Sr., who investigators said conspired to kidnap them from DHS custody.

Eight-year-old Elijah was found alone in a McDonald’s restaurant in Ardmore on July 31, and his farther was charged with child kidnapping.

Oklahoma City police spokesman Gary Knight said Elijah’s 12-year-old brother was found safe and the boys are now in DHS custody together. Elijah Muhammed Sr. was arrested and remains in the Oklahoma County Jail on a $500,000 bond. Muhammed Sr.’s affidavit reveals that previous felony convictions against him include domestic abuse, assault and battery.

Elijah Muhammed’s letter, conveying the heartbreak of a child who misses his father, led many to question the policies DHS currently has in place regarding visitation.

“We encourage biological parents to visit their children in foster care,” DHS spokeswoman Casey White said. “Visitation is mandatory for reunification to occur, and reunification is the goal.”

The exception, White said, is in instances where abuse by a biological parent is considered heinous and shocking.

“Eighty percent of the cases we see are neglect cases,” White said. “Before we ever recommend that a child be removed from a biological parent, we try to do everything we can to improve the situation at home while keeping the family together.”

Efforts to keep families together while addressing signs of neglect include enrolling parents in parenting classes and helping them find and maintain employment.

When neglected children go into foster care, they are given health insurance and any medical work they might need, including dental check-ups, immunizations and therapy, White said.

At the same time, she said, DHS makes efforts to help the children’s biological parents. They receive help in attaining employment and enrolling in treatment programs if necessary.

“Substance abuse plays a role in the majority of cases we see,” White said. “In these instances, separation between children and their biological parents is a necessary measure to take to ensure the healing and improvement of everyone involved.”

A safe reunification, White said, is a huge success for DHS.

“When biological parents have taken all the steps they need to better themselves and to better parent their children, everyone wins,” she said. “Abuse or neglect no longer just ceases for the children involved; generations of abuse can be prevented when this happens.”

In the meantime, White said, DHS requires that biological parents visit their children in foster care usually about once a month in order to qualify for reunification.

While in foster care, there are no restrictions on when a child can reach out to their biological parent over the phone or through a letter.

“It can be extremely hard on the kids,” White said. “We encourage foster parents to be involved with biological parents as often as possible if it’s what’s best for the child involved.”

In August, Arnall Family Foundation, a private funding foundation that focuses on improving the lives of children and animals across the state, committed to donating $1 million to help parents without reliable transportation visit their children in foster care.

Reunification for 8-year-old Elijah Muhammad and his father might not be possible, as his father remains in the county jail and faces felony charges.

While unable to speak about Elijah Muhammad’s case specifically, White said foster parents are encouraged to have children visit their biological parents even when they are in jail if doing so would prove beneficial for the children involved.

In cases where visitation is not possible, support and a loving foster home are crucial.